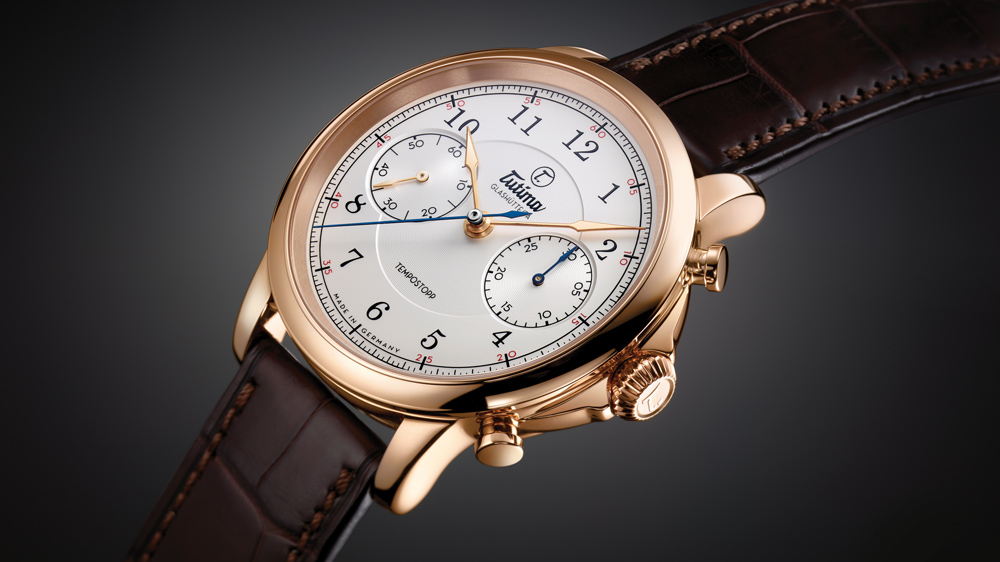 The striking Tutima Tempostopp chronograph ($29,500) is the third gold model the small German watch brand has released since returning to Glashütte in 2011; of the three, it has the clearest ties to the company’s former presence there. “This chronograph is part of our identity,” says Dieter Delecate, owner and CEO of Tutima. “Of course, from the moment we returned to Glashütte, it was our intention to remake it.”

While many other German watch companies trace their roots to 19th century pocket watches, Tutima rose to prominence during World War II, when its Caliber 59 movement (introduced in 1941) was used to power pilot’s watches for the Luftwaffe. And while Tutima (then known by the acronym UROFA-UFAG) was just one of many companies that made watches for this purpose, the Caliber 59—the first German flyback chronograph—was the most sophisticated. A vintage Tutima Fliegerchronograph (pilot’s chronograph) is clearly a wartime product, but the new Tempostopp ($29,500) is a modern, luxurious timepiece.

Without the old plans, Tutima’s developers reverse engineered the movement from the original, replacing many of the thin, stamped parts with more robust components. A hand-polished gold finish on the plates and bridges also elevates the original design and ties it to the other contemporary Tutima movements from Glashütte. The inaugural edition of the Tempostopp—limited to 90 pieces in honor of the company’s anniversary this year—is dressed as a classic gold chronograph, but Tutima has already undertaken work on other variations of the watch. An upgraded version of the Fliegerchronograph, the Grand Flieger, has been made to attract the significant numbers of combat-watch collectors who are drawn to pieces with a historical lineage.