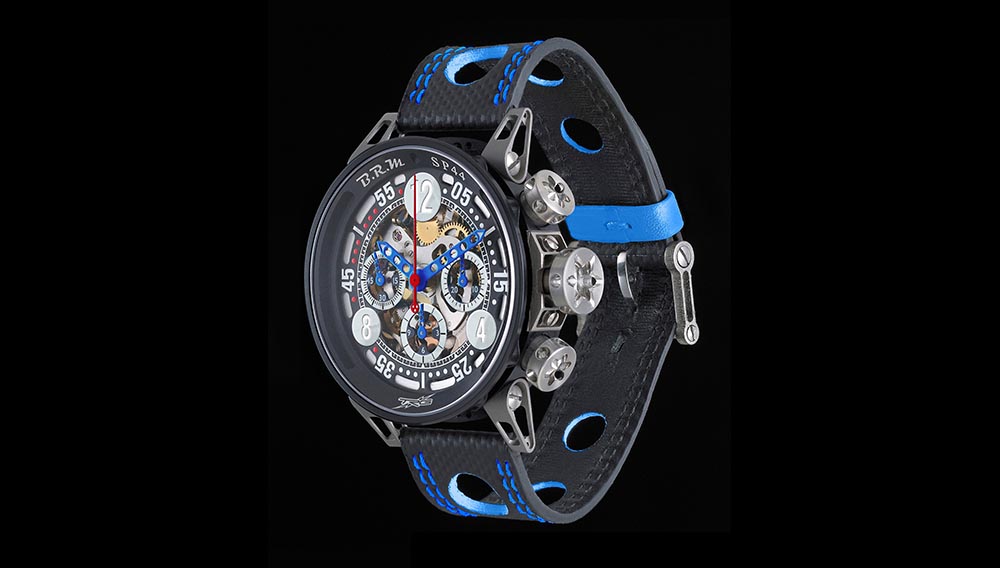 The Racer’s Group has earned their legacy in American sports history by taking victory at the most elite of endurance races: four wins at the 24 Hours at Daytona, plus trophies at the 24 Hours of Le Mans, Petit Le Mans, and over 125 podium finishes on legendary tracks. Today, TRG pursues the checkered flag with Aston Martin and Lamborghini in addition to its steadfast relationship with Porsche. Their very latest partnership will catch the eye of the racing enthusiast and motorsports memorabilia collector. TRG is teaming up with French watchmaker BRM Chronographes to commemorate their successes with a limited-edition, custom timepiece: the SP-44-TRG.

True to BRM’s specialty of creating motorsports-inspired watches, design cues from the last twenty years of TRG’s race car livery will be an integral part of the finished details. The team’s eminent logo will be laser-etched into the 44mm Fortal HR aluminum bezel, and will feature custom-painted hands, a skeleton dial, and an ultra lightweight, custom dyed and hand-stitched tech fabric strap. A key feature of the piece is that it ranks among BRM’s record-breaking timepieces: this model is the world’s lightest chronograph-automatic watch rendered in hard materials, resting ever so lightly on the wrist at a remarkable 54 grams.

TRG driver Derek DeBoer has been an ardent ambassador for the custom watch brand throughout his time with the Aston Martin race team. He brings his knowledge of the craftsmanship of these watches and BRM’s dedication to the support of motorsports that sets the company apart from other manufacturers. Interested buyers will speak directly with DeBoer before taking ownership of their custom TRG timepiece.

BRM will make only 25 examples of the SP-44-TRG. Pre-orders are now open for the bespoke timepiece from BRM and TRG; pricing, technical specifications, and high-resolution images are available upon request. For sales inquiries, please contact derekdeboer@me.com; for media inquiries, please contact Danielle Crespo, danielle@theracersgroup.com, or Abby Armstrong, abigailwindham@brm-manufacture.com.

About The Racer’s Group

TRG, based in Petaluma, California, has competed at the top level of motorsports since it was founded in 1992. The team has earned four series championships, four Rolex 24 At Daytona victories, a victory at the fabled 24 Hours of Le Mans, a victory at Petit Le Mans, and an impressive 125 combined podium finishes in major North American sports car competition, the third-highest total in history and the most for any privateer team. TRG-AMR, The Racer’s Group professional racing branch, exclusively operates the Aston Martin Racing (AMR) sports car program in North America and races in IMSA’s SportsCar Championship, the Pirelli World Challenge, and the Lamborghini Super Trofeo series. theracersgroup.com

Inspired by motorsports, driven by craftsmanship and engineered for exclusivity, BRM’s bespoke timepieces are defined by pure racing spirit. Devoting more than two years to experimentation before launching the label’s inaugural chronograph in 2003, founder Bernard Richards channeled his mechanical expertise to establish a brand that’s gone the distance as the only French watchmaking manufacture. Fully customizable, BRM products are built for authenticity and performance, and the company’s iconic, limited editions have garnered elite global partnerships including Gulf Oil; Abarth; IndyCar drivers Marco Andretti and Simon Pagenaud; and many more. www.brm-manufacture.com