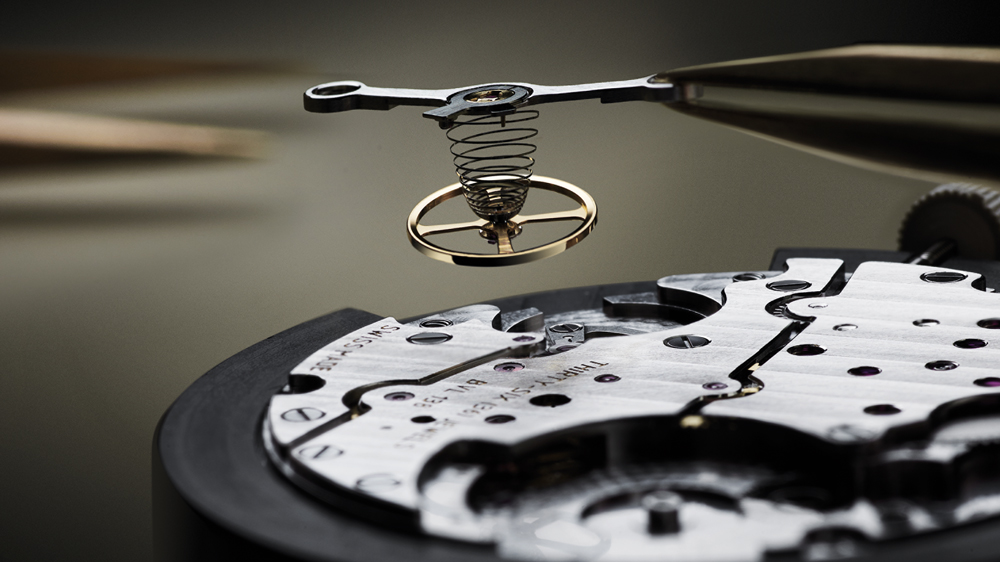 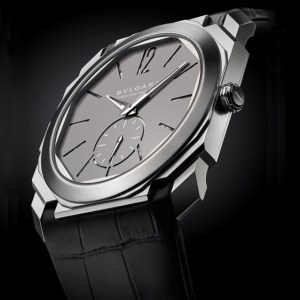 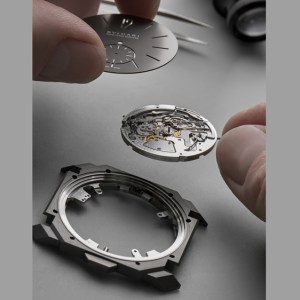 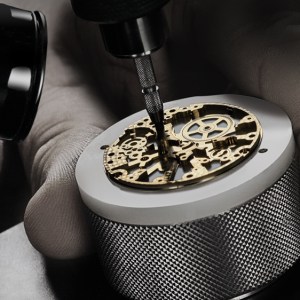 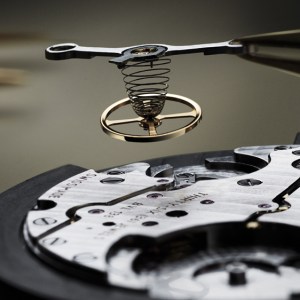 Mastery of ultrathin horology is a particular source of pride for the watchmakers of Bulgari, which earlier this year introduced the world’s thinnest self-winding wristwatch, the Octo Finissimo Automatic. “For us, Finissimo is really a statement,” says Fabrizio Buonamassa-Stigliani, the company’s lead watch designer. “Each is sort of a grand complication. It is the technical flagship of the brand.” Bulgari’s recent world records—which also include thinnest wristwatch tourbillon and minute repeater— result from genuine technical achievements backed by impressive design. Yet the skillfulness and competitive spirit driving the company’s efforts are the same dynamics that have guided the creation of ultrathin pieces throughout watchmaking’s history.

Thinness and compactness have served as indicators of a watch’s technical sophistication for well over two centuries, especially after Abraham-Louis Breguet began to emphasize those qualities in his pieces at the beginning of the 19th century. Then, as now, the challenge lay in crafting components of the thinnest practical dimensions and then carefully assembling them to function properly. Aligning the wheels and ensuring the proper pressures and clearances are exponentially more difficult tasks in specialized ultra – thin movements—so much so that the work is usually performed by high-level watchmakers with expertise in complications. 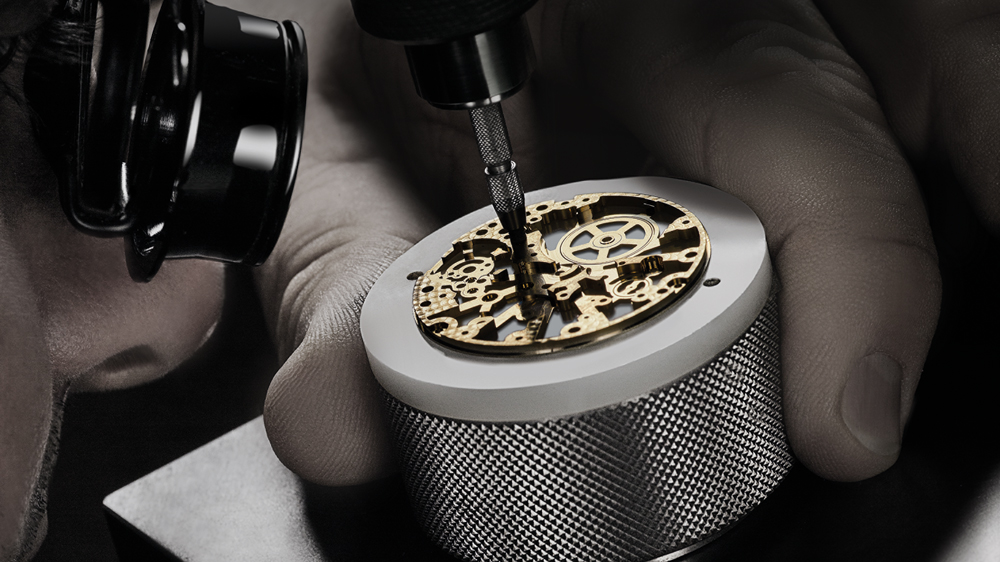 Simple tasks like tensioning a screw must be extra precise on an ultrathin watch  Photo: Courtesy Bulgari

“A normal [mainspring] barrel and ratchet can be adjusted in half an hour to one hour,” says John Sheridan, a master watchmaker at Bulgari’s Le Sentier manufacture. “The same mechanism on ultrathin watches takes a day. Too much pressure can constrict the spring, and you can lose 30 degrees of amplitude in the balance just like that.” Difficulties also increase as pieces get more complicated. The extrathin minute repeater the brand unveiled last year takes just as long to build as a grande sonnerie, the most complex model in Bulgari’s portfolio. Of course, much depends on the quality of the parts, which are produced today by computer-numerical-control (CNC) machines that must be specially programmed and handled for such precise milling. “It’s the same machines for producing an ultrathin movement and regular movements,” notes Sheridan, “but the time for machining the parts is two to three times than for regular parts because the precision requirements are higher. Much of this is in the setup of the machine.”

The emphasis on handwork and adjustment in watchmaking was much more pronounced a century ago, when skilled artisans produced ultrathin watches that might embarrass today’s top practitioners. In 1907— more than a quarter-century before their names would be united under a single marque—the Swiss movement maker LeCoultre produced a caliber that was an amazing 1.38 millimeters thick for French watchmaker Edmond Jaeger. Caliber 145 was produced in small numbers and just for pocket watches. Its flabbergastingly svelte dimensions (the thin – nest contemporary wrist – watch movements are 25 percent thicker) were facilitated by the large diameter of the pocket-watch movement and, to an even greater degree, the manufacturing methods of the day, which allowed skilled watchmakers to play with nearly every facet of component fabrication and assembly on an individual basis. 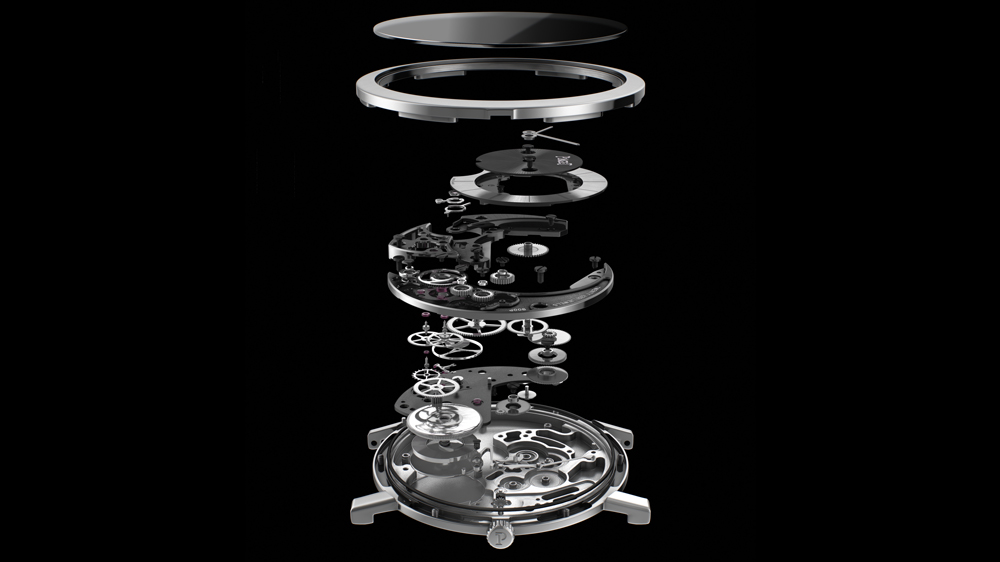 It was the small watch and component maker Piaget, however, that first discovered it could distinguish itself by becoming a modern specialist in ultrathin watchmaking. Piaget’s introduction of the 2-millimeter-thick 9P manual movement in 1957 and the only slightly thicker 12P automatic movement 3 years later gave rise to a whole generation of remarkably elegant wristwatches that seemed to indelibly tie the brand to ultra-slim horology. Piaget’s 12P incorporated the recently developed micro rotor, which wound the watch by way of a small mass recessed into the movement. Suspended by two bridges, the device fit the diminutive dimensions of the movement impeccably, and the component is often used in ultrathin watchmaking to this day. Panache, however, was not necessarily a priority for Piaget’s designers, who deliberately favored conventional movement architecture—an approach the company has adhered to with the new-generation ultrathin calibers it has introduced at intervals since the late 1990s.

“The more simple and basic you are in terms of architecture on the ultra – thins, the more reliable you are,” explains Quentin Hebert, one of Piaget’s movement specialists. “That is the chief design consideration for the whole 1200 family. There are no crazy constructions. What we do have to master is the repetition of the thinness of the components from one movement to another.”

As a result, the movements for Piaget’s relaunched Altiplano models back away slightly from the extreme dimensions of the 9P and 12P in favor of improved reliability and better flexing tolerance. Despite these con – cessions, the brand continues to see the value in producing record-setting thin watches. Subsequent versions of the 1200 (automatic) movement have established thinness records for automatic winding, subsidiary-seconds, skeleton, and diamond-set wristwatches. 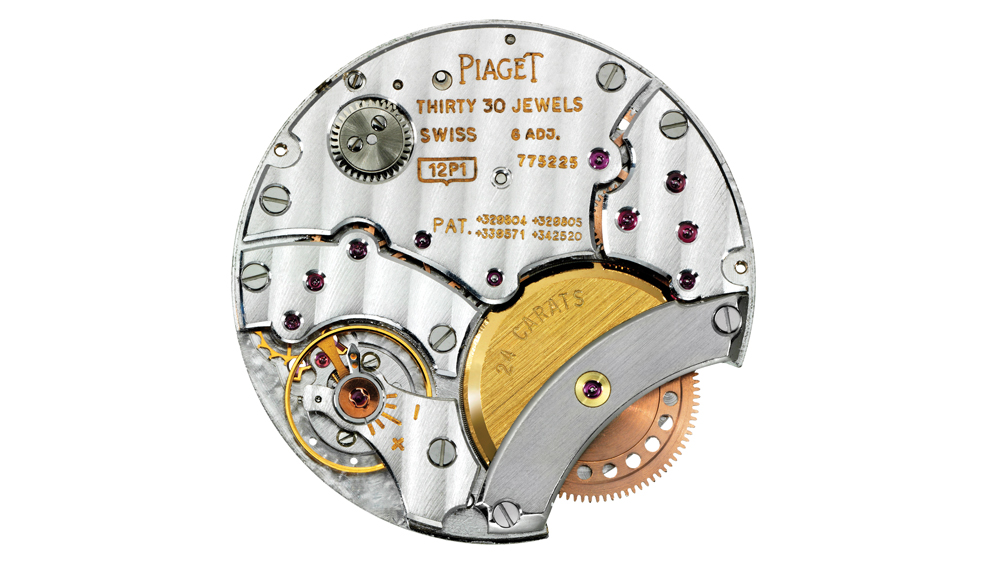 According to the company, Piaget’s efforts in ultra – thin watchmaking are driven by considerations of aesthetics and style. However, it is difficult to believe that setting a world record was not one of the primary considerations behind the radical design of 2014’s Altiplano 900P. By using the caseback as the main plate of the movement, Piaget reduced the overall thickness of the watch to just 3.65 millimeters. The brand’s engineers are also quick to point out that the architecture permitted the use of full bridging on the movement, a construction Piaget has retained for function and reliability.

Although Piaget has consistently shown an essential conservatism in movement design, Bulgari—the new lead player in the segment—will not submit to such rigid constraints. One of the two ultrathin models it launched in 2014 was a 1.95-millimeter thick tourbillon that dispensed with traditional bridging in favor of bearing systems to support several of the wheels in the gear train as well as the tourbillon cage. This arrangement might make conservative-minded watchmakers blanch, but Bulgari shaved nearly a millimeter off the movement height of its closest competitor. “The bearings almost need to be individually polished for perfect running,” says Sheridan, who works on these movements almost daily at the Le Sentier facility. “Each has to be adjusted so that there is no movement or play in the bearing race, yet it runs freely. It’s a very delicate adjustment.” 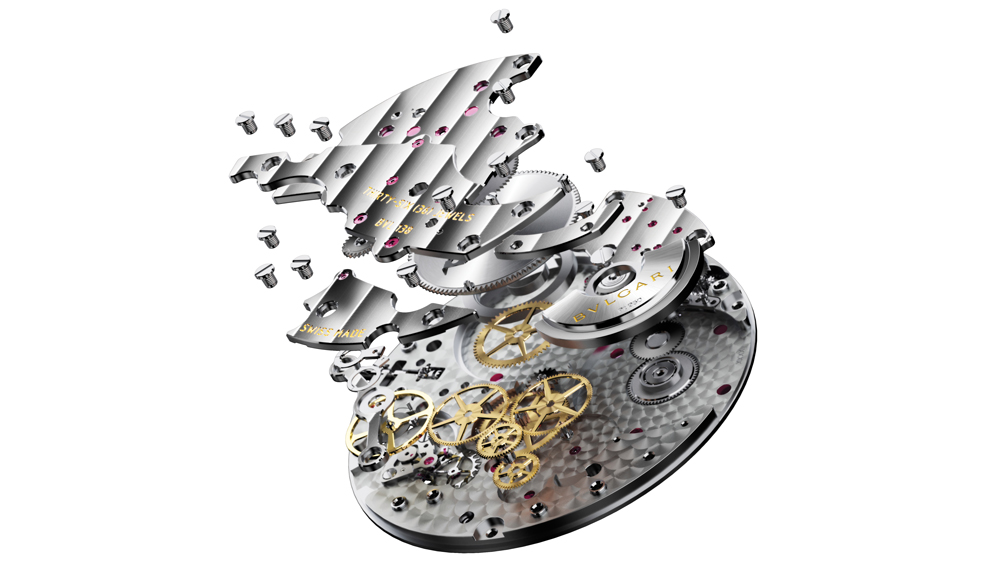 Alongside the 2014 tourbillon, Bulgari released a hand-wound, small-seconds model that certainly qualified as ultrathin at 5.37 mm, though it broke no records. The design of the 2.353- millimeter-thick movement, however, demonstrates the company’s ambitious planning. This year, the movement was adjusted by removing the reverse-side power-reserve indicator and replacing it with a microrotor winding mechanism. This configuration allowed the movement to be a few hundredths of a millimeter thinner than Piaget’s 12P and the watch to present a slimmer profile than Piaget’s thinnest automatic. The margins of difference in measurement may be tiny, but insofar as they serve to demonstrate the competency of the brand’s Le Sentier facility—now managed by Jean-Yves Basin—they are hugely significant.

For every record achieved by the makers of ultrathin watches, there are many stories of movements that were never brought to market or were discarded altogether because of functionality or reliability problems. Despite this failure rate, the quest for thinness is more relevant now than ever before. As increasing numbers of col – lectors prefer pieces—even complicated ones—that are wearable under the cuff, the competition to save space inside the case is yielding watches that are more enjoyable and comfortable to wear on the wrist day after day.