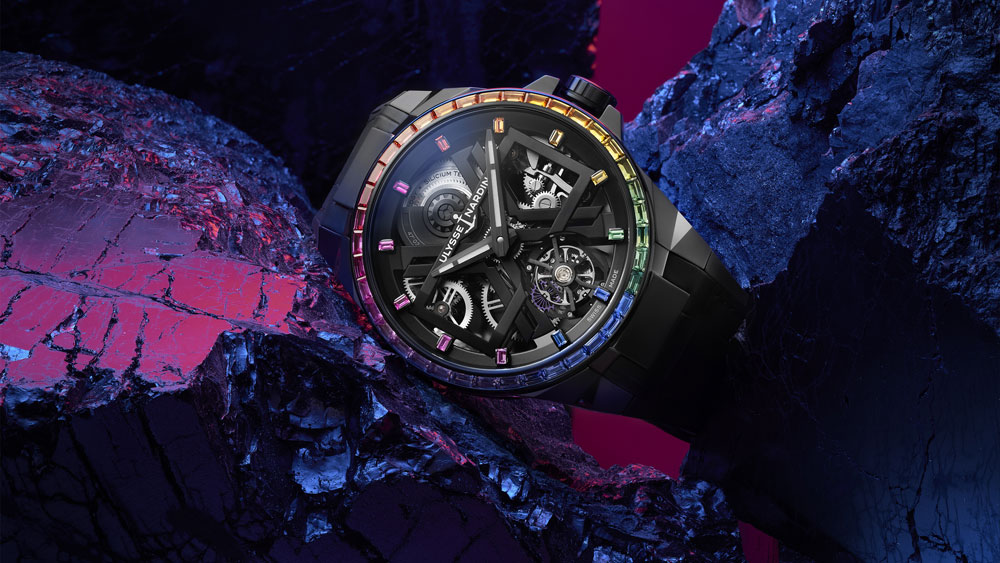 When you think of Ulysse Nardin, you most certainly conjure up an image of a bold watch. Perhaps you picture an oversized dive model drawing from the brand’s tenured history of marine chronometers or an all-black iteration of their iconic Freak housing a silicium escapement—bold from the inside out. At this year’s Geneva Watch Days, Ulysse Nardin is taking its bold aesthetic to a new level by jumping on the rainbow bandwagon with two models boasting full-spectrum color.

Ulysse Nardin was among the founding brands of Geneva Watch Days when the event launched in 2020. Here, it unveiled models including the Sparkling Blast, with its 211 diamonds, and the Blast Tourbillon collection, each with a fully transparent dial and caseback revealing the movement in its full glory. To outdo themselves would be a feat but again, bold is the only way Ulysse Nardin knows how to make a watch.

Enter the Blast Tourbillon Rainbow, combining the gem setting of the Sparkling Blast and the tourbillon technology of the original Blast Tourbillon. Like the debut Blast, the new Rainbow is instantly recognizable for its skeleton “X” dial, hefty 45mm case, and micro-rotor in platinum placed at 12 o’clock. The look is complete with a black DLC titanium case and the option of a waterproof velvet rubber strap or a black alligator strap. Ultimately, this all-black canvas creates the perfect backdrop for a total of 50 ruby and sapphire baguettes to pop on the bezel and indexes. Inside, you’ll find the UN-172 caliber movement with the brand’s legendary silicium technology extending to the escapement wheel, anchor and balance spring.

While silicon has become increasingly prevalent in watchmaking in the last two decades, Ulysse Nardin was one of the first to employ the material in its revolutionary Freak model in 2001. They began by using it in place of steel for two escapement wheels. With the UN-172, an automatic tourbillon derived from the manually wound UN-171, the use of silicon (which the company refers to as silicium) extends beyond the escapement wheel and to the anchor and balance spring. The result is the brand’s first automatic skeleton movement with a tourbillon function.

Like silicon, the rainbow color scheme has also become increasingly prevalent in watchmaking in recent years. What was once a polarizing novelty in models like the Rolex Daytona, whose rainbow roots extend back to the ’80s, is now employed by even the world’s most prestigious watchmakers. In the past few years in particular, it’s become clear rainbow watches are more than a passing trend. So it comes as no surprise that Ulysse Nardin, a brand known for its daring aesthetic, would be among those making rainbow a part of their collection.

In addition to the Blast Tourbillon Rainbow, Ulysse Nardin builds on its ladies’ line while sticking to the rainbow theme with the Lady Diver Rainbow. Offered in black or white, each adorned with 40 stones set on the bezel, this 39mm sport watch is available in a limited run of 300 pieces at a price of $13,600. The Blast Tourbillon Rainbow is even more exclusive with a limited run of just 50 pieces at a price of $89,700. Check out Ulysse Nardin’s website for all the details.