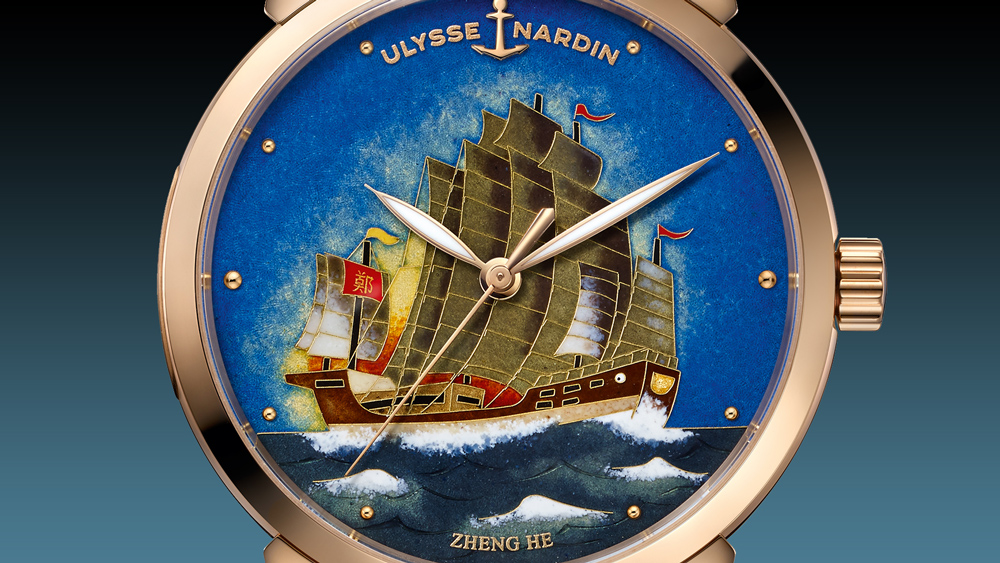 By turning to the skilled artisans of Donzé Cadrans—the enamel specialists workshop owned by Ulysse Nardin since 2011—the new limited edition Classico ($39,800) features an immense level of detail within its compact dimension. The vessel on its dial represents one of the many treasure boats (or Bau-Chuan) sailed by Chinese admiral Zheng He during his seven extensive voyages between 1405 and 1433.

The dial of the new Classico Zheng He uses the centuries-old technique of cloisonné enameling—a method requiring significant skill and patience, and requiring more than a week’s labor to complete. The 18-karat rose gold timepiece measures 40mm in diameter, and is powered by Ulysse Nardin’s in-house manufactured UN-815 COSC-certified automatic movement. Only 30 examples of the Classico Zheng He are slated for production.

This latest Classico release is one of four limited edition enamel-dialed models from Ulysse Nardin with a historic Nautical collection. The Classico Kruzenshtern from 2015 depicted the 1926 German exploratory vessel gifted to the USSR as part of war reparations in 1946. The Classico America that the brand unveiled last year, depicts the historic schooner of the same name who triumphed over 15 yachts of the Royal Yacht Squadron to win the Auld Mug—the trophy now known as the America’s Cup.