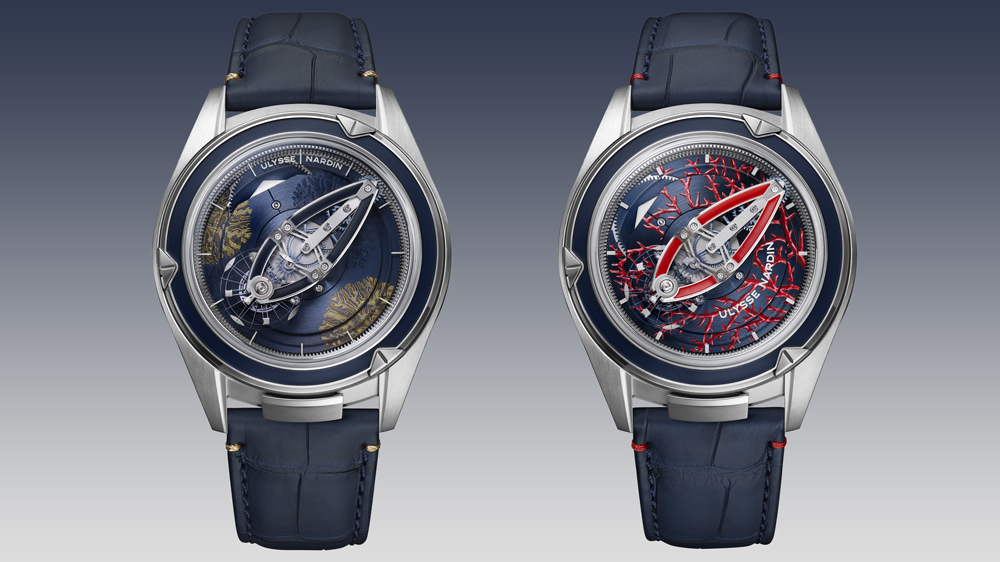 When it debuted in 2001, the Freak by Ulysse Nardin was considered one of Swiss watchmaking’s most horologically cutting-edge timepieces.

Famed for its lack of a crown, hands, and dial as well as its groundbreaking silicon escapement, the watch was aptly named. With its carrousel tourbillon movement displayed openly on the dial, it was far from conventional. The fact that it marked the first time a watch brand had used silicon in a movement nudged it into icon territory.

In the 17 years since, the model has inspired nearly a dozen references—including the Freak Vision, a onetime concept watch and the first automatic watch in the Freak series that the brand debuted as a regular production piece at Geneva’s Salon International de la Haute Horlogerie in January. Its chief claim to fame? A super-light silicon balance wheel with nickel mass elements and stabilizing micro-blades along with a thinner case design featuring a box-domed crystal.

Earlier this month, the brand announced two brand-new Freak Vision pieces that up the aesthetic ante on what Ulysse Nardin’s head of product and design, Jean-Christophe Sabatier, describes as “not only the most advanced Freak to date, but perhaps the most groundbreaking watch Ulysse Nardin has sold since the introduction of the original Freak.”

Those two unique pieces take the Freak Vision into a more decorative realm. Dubbed Freak Vision Coral Bay, after the snorkeling reef in Western Australia, the two watches are distinguished by intricate dial designs that evoke the organic look of the reef itself.

The design on the blue-gold model ($108,000) features gold threads on the hours and barrel cover created through a bonding technique that relies on thousands of 24-karat-gold threads. Typically used by the electronics industry for chip production, the bonding process has been co-opted here for dramatic aesthetic effect.

“The bonding machine squeezes gold thread on each side, one thread after another, to draw a coral reef motif on the watch movement’s barrel spring bridge,” says Sabatier. “Each thread is a different size, and each is tied only at the top and bottom of the thread [but not in its center]. To create blue and yellow-gold coral reef patterns, the watchmaker colors the component and the coral reefs with a chemical vapor deposition process in blue. The entire surface is colored except the departure and arrival points of the yellow-gold threads, which are laser cleaned. Then the yellow-gold threads are bonded to the component.”

The red model, with micro-painting on the hours and barrel cover, retails for $102,000. Both pieces are available on demand.