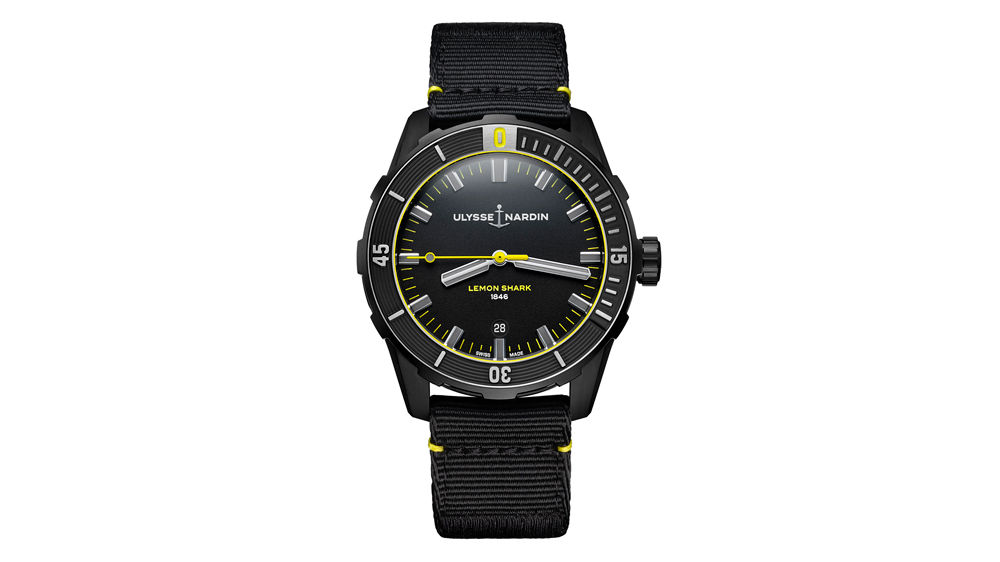 Just in time for World Oceans Day, Ulysse Nardin has released its latest Diver dedicated to the brand’s menacing mascot, the shark.

We had the opportunity to try on the Lemon Shark at a press event in Key Largo, Florida and the major takeaway is that, at 42 mm, this Diver is surprisingly suited to many wrists: It didn’t overpower those used to wearing smaller sizes and it had enough presence to satisfy one who favors a hefty 45 mm Panerai. Ulysse Nardin introduced the size in its Diver collection in 2018 as a welcome alternative in a genre known for bulkier cases. Thanks to this timepiece’s concave bezel and dome-shaped sapphire crystal, it wears smaller than you might imagine but is, nevertheless, designed for high-impact.

Just like its namesake, it’s powerful but subtle. “For those of us that handle them, one of the things you have to be careful of is that, while most sharks are fairly stocky, lemon sharks can fold in half,” says Michael Heithaus, the dean of the College of Arts, Sciences and Education at Florida International University. “That combined with the fact that they are a little bit testy, these are the sharks that I’m most wary to be around… They will look at you and say, ‘You’re messing with me. I’m going to ruin your day.’ They can be aggressive but if you’re out diving and see them, they are totally chill.”

A marine ecologist and scientist specializing in sharks, Heithaus and the FIU Medina Aquarius Program (the world’s only underwater research and education lab) have partnered with Ulysse Nardin in an effort to better understand and protect the ocean’s ecosystem. They’re joined by another research partner, Ocearch, a data-centric organization built to help scientists collect data from the ocean at an accelerated pace.

The seas have long been a focal point for the watchmaker, which traces its roots back to 1846 in Le Locle, Switzerland, where it established its name as a marine-chronometer expert providing highly accurate instruments to commercial ships and international navy fleets. Building on that heritage, Ulysse Nardin now focuses on giving back to the ocean instead of conquering it. It has centered its endeavors around Ocearch, which considers itself a groundbreaking company in its efforts to “Google-ize” the approach to ocean research, as its aptly named founder and CEO, Chris Fischer, puts it. The idea is to cut out the bureaucracy of academic research by pooling together scientists and their data for a more collaborative, speedy approach to learning that bypasses time spent trying to nail down tedious grants and fundraising.

“When you look at partners like UN, they have this ancient history with marine chronometers, but they are also a bit of a disruptor in terms of their design,” says Fischer. “They came in and found us and we were just thrilled to partner with them because of the disposition of the company.”

In keeping with its do-good seafaring ethos and commitment to ocean conservation, Ulysse Nardin paired the Lemon Shark with a fabric velcro strap made entirely from recycled fishing nets collected in Marseille, France. Inside is all the meat and jaws that power the luxury timepiece in the 42-hour power reserve Caliber UN-816 movement, including a silicium escapement—an efficient material widely adopted by the industry, but pioneered by Ulysse Nardin.

Water-resistant to 300 meters (984 feet) and limited to just 300 pieces, you will need move fast to capture the, relatively, reasonably priced $7,300 Lemon Shark.