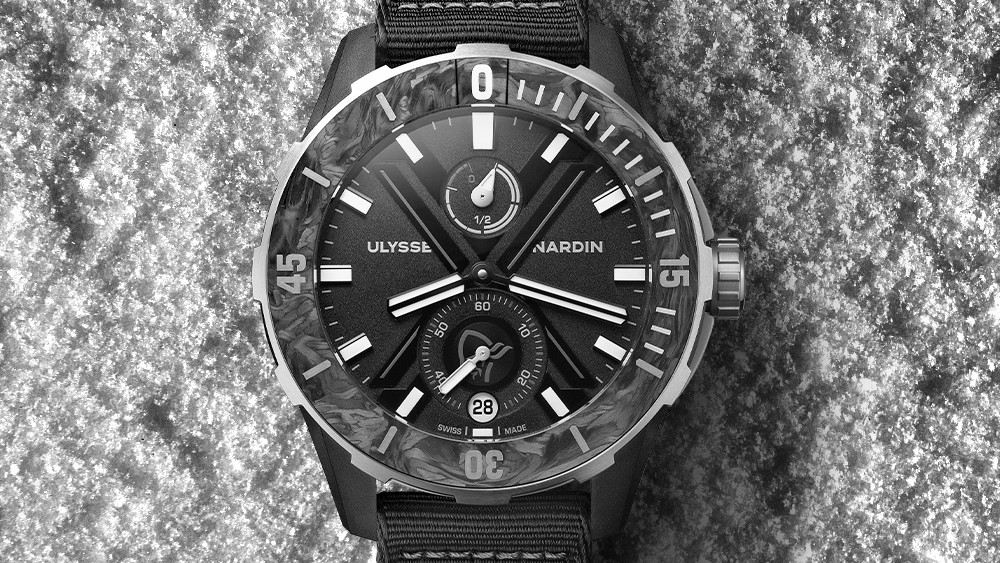 Ulysse Nardin has built a reputation for its commitment to the world’s oceans since it first began creating marine chronometers for explorers, sailors and navigators in 1860. In more recent years, the brand has extended its efforts to ensure sustainable management of the seas through key partnerships and by shifting to a more circular model using alternative materials to produce more sustainable creations.

Now it’s extending this work with the announcement of a new partnership with the Norwegian outdoor sportswear brand Norrøna, which is known for its sustainable premium outerwear. Together, the pair introduces their first collaborative timepiece: the Diver Norrøna Arctic Night.

Available in a limited run of 29 numbered pieces, the watch is the most sustainable piece in the brand’s portfolio to date. Inspired by the beauty of Norwegian landscapes, from the Fjords to its ancient volcanic rocks, its color palette is a moody black, gray and white. The watch is notably made up of recycled elements, and Ulysse Nardin is fully transparent in terms of its suppliers.

This is why we know, for example, that for the side-case and case-back, UN uses 40 percent Carbonium®, which it claims has a 40 percent lower environmental impact than other carbon composites, and 60 percent recycled fishing nets supplied by Lavoisier Composite and FIL&FAB in France. The 44mm stainless-steel case is made of 80 percent recycled automotive materials supplied by Voestalpine Boehler in Austria, and the strap is made from 100 percent recycled fishing nets supplied by JTTI in France. Inside, you’ll find the brand’s UN-118 automatic movement with parts almost entirely sourced within a 30 km radius of the Swiss manufacturer.

In addition, each watch is sold with an arktis Gore-Tex® Pro jacket from Norrøna. The coat was designed in collaboration with Norwegian polar explorer Børge Ousland, who is, frankly, a bit of a badass: He’s the first person to complete solo crossings of both the Arctic and the Antarctic, dragging sleds weighing up to 150kg as he did so. The former Norwegian Navy Seal is a longtime partner of Norrøna. You can pick up the watch and jacket at Norrøna’s flagship stores in New York, Munich, Oslo and Stockholm as well as on both Ulysse Nardin’s website and Norrøna’s website beginning November 2. The price for both will be $12,600.