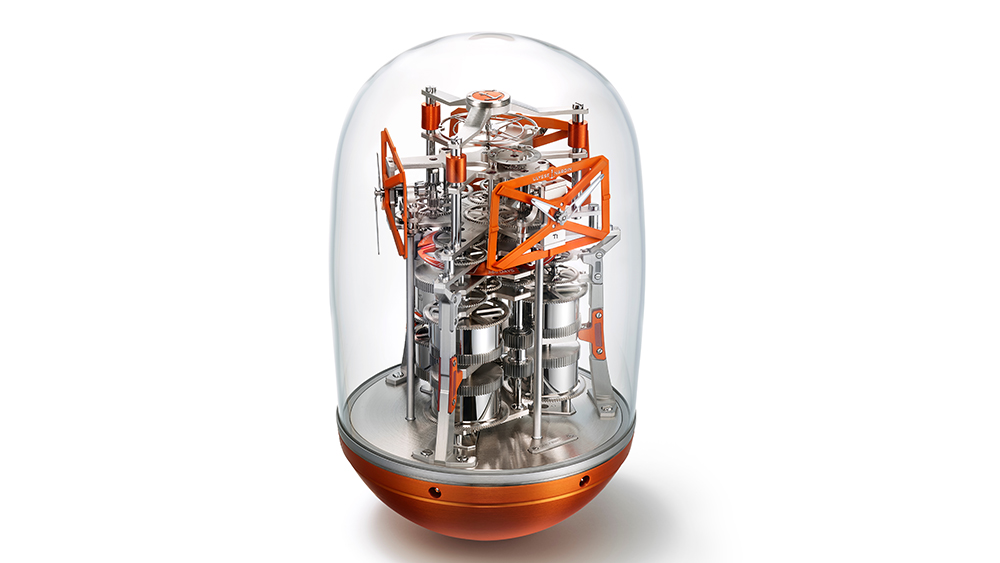 Ulysse Nardin’s latest timepiece is truly out of this world.

The unique UFO table clock, which was designed for Christie’s upcoming Only Watch charity auction, comprises some 675 components. The Swiss watchmaker classifies it as a mix between a wacky objet d’art, toy and clock. Suffice it to say, it’s sure to stand out on any table.

The design is a riff on the metallic blue UFO that Ulysse Nardin released last April. The original design was limited to just 75 examples, which were all promptly snapped up by collectors. As such, the new version, designed with a striking orange hue, is expected to fetch between $66,000 (CHF 60,000) and $88,000 (CHF 80,000) at this weekend’s sale.

Ulysse Nardin says the UFO is actually meant to be a futuristic interpretation of what a marine chronometer will look like in 175 years. This type of watch, which the house grew to prominence with in the early 20th century, was set on gimbles to counteract the effects of a ship’s constant rocking. The UFO does the opposite: It actually mimics the movement of the sea. The 16-pound clock is fitted with a heavy aluminum base that acts as a counterweight. It can swing or sway up to 60 degrees from its axis without toppling over or compromising the mechanics.

The clock’s complex inner workings can be viewed through a hand-blown glass dome that is secured by a bayonet system. Designed in collaboration with Maison L’Epée, the UFO features a manually wound UN-902 movement with six extra-large barrels and a balance wheel spanning 49 mm. The wheel moves slowly at a frequency of 3,600 beats per hour (0.5 Hz) to maintain a power reserve of one year and also give the clock a meditative quality.

The UFO is expected to fetch up to $88,000 at the Only Watch auction.  Ulysse Nardin

The UFO tells the time, too. It features three trapezoidal dials, which are so complex it takes 28 hours to manufacture just eight. This allows the you to display three different time zones at once that can be appreciated from three different angles.

The one-off UFO will go under the gavel alongside a number of other rarities at Christie’s Only Watch sale in Geneva on Saturday, November 6, to raise funds for research into Duchenne muscular dystrophy. Since 2005, the charity auction has raised more than €70 million ($59.5 million) in aid of research for the genetic disease that currently has no cure.