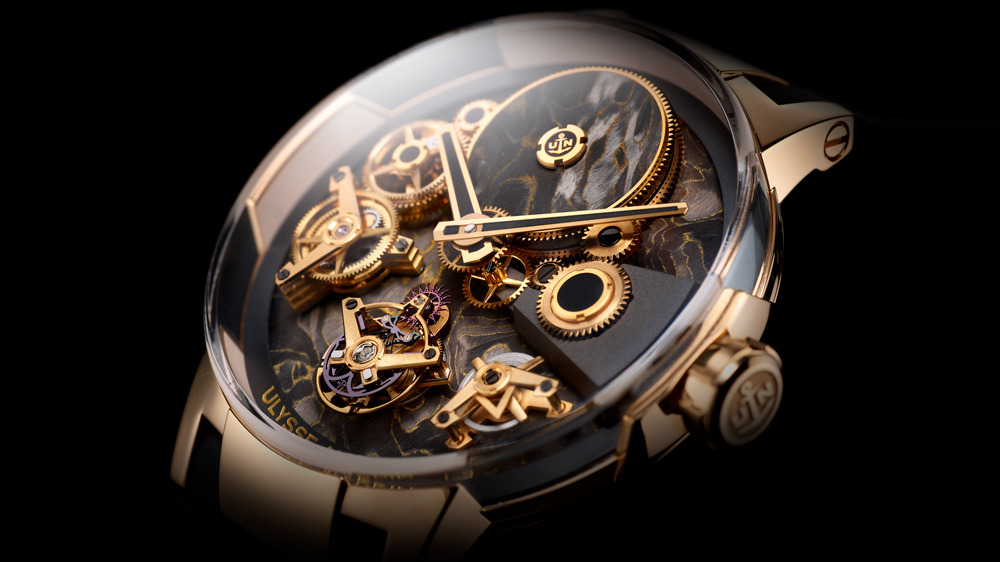 In an industry besotted with vintage timepieces, Ulysse Nardin stands out as something of a contrarian. The brand has nurtured a reputation for producing forward-thinking wristwatches since 2001, when it debuted the Freak, whose ground-breaking lack of a crown, hands and dial was in step with the watch’s pioneering construction; the piece marked the first time silicon appeared in a watch movement.

In 2018, the brand took that reputation to the next level with the Executive Tourbillon Free Wheel, a far-out looking timepiece distinguished by components that seem to free-float across the dial. Presented in rose gold and white gold versions, the model has been revived this month with four offbeat new dial iterations, manufactured in a limited edition of 18 for each design.

“The concept of flying components from the Free Wheel allows Ulysse Nardin to play with the background,” says a brand representative. “This ‘out of space’ timepiece needed to be magnified with special executions, to highlight the flying wheels. We wanted to use special materials for a special timepiece.”

Each of the four faces is radical in its own distinct way. One piece bears a dial made of osmium, a heavy, rare and dense platinum group metal found in trace quantities, mostly in ore ($102,000). Deep blue aventurine, a translucent form of quartz characterized by inclusions that lend it a shimmery appearance, graces the dial of a second edition ($99,000). A third piece features a dial decorated with shiny, black-dyed straw applied using a 17th century technique known as straw marquetry ($99,000). And a fourth piece is fronted by a dial composed of a space-age material called Carbonium Gold, a combination of aeronautical carbon fibers, a pre-pregnated resin composite and gold particles ($99,000).