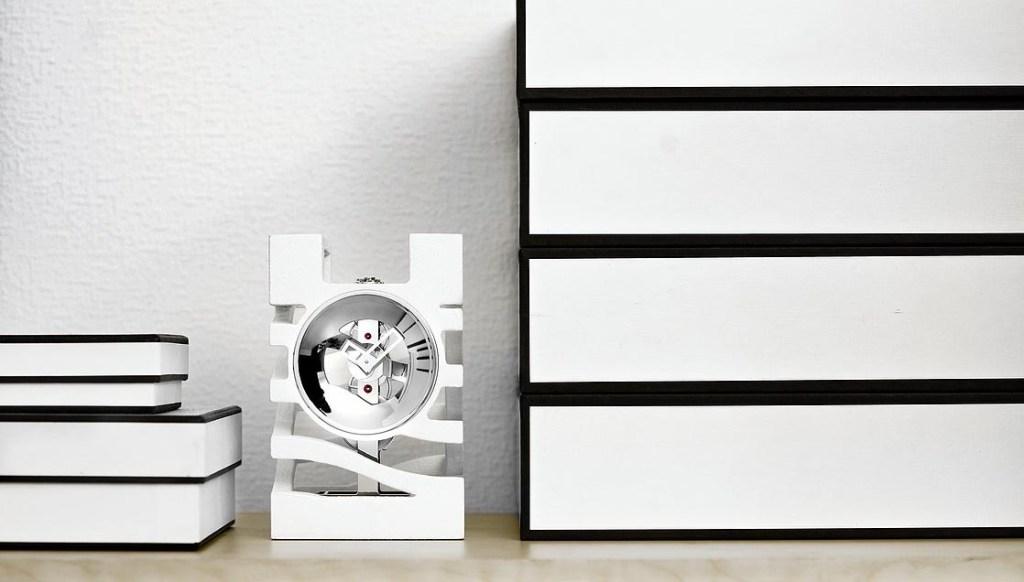 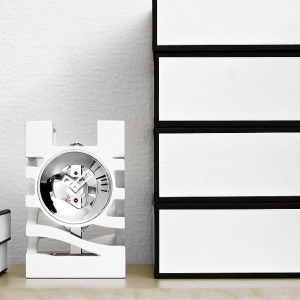 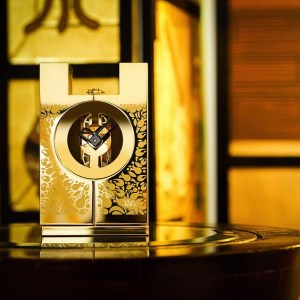 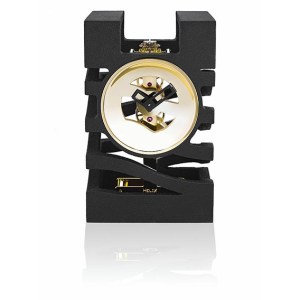 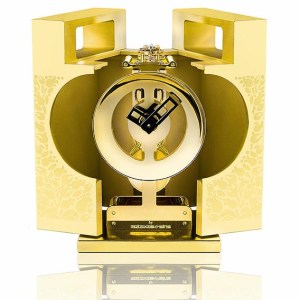 Kostas Metaxas and the watchmaking brand Matthew Norman have joined forces to create two unique objects that are tokens of their creative personality, reinventing the table clock.

Combining modernity and tradition, the pieces fall within a different but complementary perspective, whilst having the reliable Matthew Norman mechanisms in common.

Helix and Garden of Eden both offer a power reserve of 8 days and are wound manually using a single key, which is also used to adjust the time. Each houses the Matthew Norman 1754 movement adapted and redesigned for this collection.Helix and Garden of Eden have 17 jewels each which, among other merits, ensure the durability of the mechanical movement.

Each clock is produced individually, by hand, by master clockmakers. These artisans possess expertise that combines modern technology with traditional methods. Their excellence is the result of many years of experience in luxury watchmaking, in keeping with the brand’s high standards and its desire to offer avant-garde and exclusive objects to enthusiasts of moving sculptures.

With Helix and Garden of Eden, Matthew Norman writes a new chapter in the development of the carriage clock, renewing the genrethrougha contemporary interpretation of a traditional object with a rich history.

Helix is comprised of 148 hand-assembled pieces. With a movement made entirely from brass, Helix is a creation of refined lines and an ethereal futuristic design. The casing materials are die-cast, before the parts are slotted together, one by one, with the movement in the middle. Mechanical clockmaking enthusiasts will appreciate the technical properties of this carriage clock, which pays tribute to Swiss horology. Its dimensions (110x175x100mm) make this a chic and exclusive object.

The Helix carriage clock was worked from an ethereal and exceptionally modern angle. The lines of the object and its defined structure make it a very avant-garde piece. Above all, Kostas Metaxas wanted to play with the perception of the technology enhancing his work. Sometimes hidden, sometimes visible, depending on the viewing angle, the mechanism seems to be protected by its intertwined lines. It is also revealed to the attentive observer from a completely different perspective, evoking the origins of the brand by symbolizing the helix of a strand of DNA.

Available in a golden or black finish, this model is sure to appeal to aesthetes appreciative of pure and resolutely contemporary lines.

Garden of Eden: In the Beginning

Garden of Eden presents a more classic design and echoes the genesis of life thanks to its name and floral decoration. This carriage clock resembles a complex flower whose innermost beauty remains hidden until the doors are opened, revealing an ultra-sophisticated clock mechanism.The lines of Garden of Eden are intended simply to tell the beautiful story of life; a most poetic allusion to the creation of humankind,to the beginning and to the renewal of a genre.

Garden of Eden is the fruit of laser-cutting work, also used to create the floral decoration of the case. Comprised of 167 hand-assembled pieces, the clock is available in a golden or nickel-plated finish. This model also features a chased finish, which gives it a subtle sophistication.

Garden of Eden is perfectly suited to refined interiors, alongside other rare and delicate objects.

Timelessness combined with elegance, a focus on authenticity, a luxurious object which conveys and embodies values of aestheticism and exclusivity – these are the promises made by the new and revisited Matthew Norman clocks.

The genesis of a partnership

An invitation to reinterpret: While the clocks are objects inherited from another era, Garden of Eden and Helix offer a very contemporary look. The designer’s signature style and aesthetic ability, combined with the Manufacture’s expertise and heritage, result in clocks that are the surprising product of a rich and diverse world. Kostas Metaxas was an enthusiastic participant in this project, because, as he says: “horology is a very rich field with very few constraints, and therefore offers a great deal of creative freedom!”

An invitation to technological innovation: The brand’s guiding principle is the constant renewal of its lines. Adopting continually evolving techniques supports its creativity and flair for design. The partnership with Kostas Metaxas therefore came about naturally. It bears witness to Matthew Norman’s positioning and its desire to shake up established norms. The designer’s lines are powerful and original, in line with the direction that the brand has chosen for its new collections.

An invitation to travel: Imagined on the Greek island where Kostas Metaxas spends part of his life, these carriage clocks are intended to reflect our era and to stand the test of time. Having previously worked on watch collections, he appreciated this new challenge that presented a wider range of possibilities in the field of horology. The brand’s desire to develop a new interpretation of the carriage clock led Kostas Metaxas to breathe his unique exoticism, modernity and originality into these objects of great beauty and timelessness.

An invitation to pleasure: These contemporary clocks present a form of satisfaction that contrasts with their original purpose. Previously intended to serve practical purposes – to tell the time – they now have a new role: to bring originality and exclusivity to each interior. Giving rise to a veritable moving sculpture, technology enhances the designer’s work, broadensthe possibilities and paves the way for imagination.

Admirer of the exceptional: Kostas Metaxas is a magazine editor, film producer, and art and technology enthusiast. He draws his inspiration from various sources, and his wide-ranging activities complement each other to enrich his creative work. His career is unusual: from art to design, the step was self-evident to him. In his hands, he holds the means of speaking to the soul. It was with the eyes of a discerning and multicultural artist that he approached this all-new design. His creations are unique and he has won countless awards for his designing talents.

Ceaseless traveler: An Australian born to Greek parents, Kostas Metaxas travels the world from Darwin to London, the Greek islands to Germany. It was over the course of his travels that he found the inspiration for these two models, the fruit of his boundless imagination. A self-taught designer, he likes to approach the conceptualization of objects through different materials. He applies contemporary technology to them and uses metals in an entirely novel way to innovate and create – a philosophy compatible with that of the Matthew Norman Manufacture.

Inspired designer: For this unconditional enthusiast of luxury, perfection and new production technologies, creating beautiful objects is an endless source of satisfaction. He took a great deal of pleasure in designing these new clocks. From their overall lines to their details, he devised the entire production procedure in partnership with the Manufacture’s engineers. Modern forms of technology help to enhance his imagination and creativity with noble materials. Kostas Metaxas aims to create living objects that stand the test of time and are handed down the generations. Helix and Garden of Eden are therefore intended to please several generations of enthusiasts; they form part of a dynamic that bucks the trend of our fast-moving consumer society.

The history of Matthew Norman

“The art of experiencing time.”

Matthew Norman is abrand of much symbolism. Established in the 19thcentury, the Maison perpetuates a tradition of carriage clocks. Legend has it that Napoleon I – exasperated by the tardiness of his officers, which almost caused him to lose a battle – made the use of a carriage clock obligatory in the army. Indeed, the surge in popularity of these travel clocks dates from the 19th century. While the world has changed considerably since those times, Matthew Norman’s expertise is the fruit of more than 100 years of research and innovation, the result of a continual quest for perfection in which design plays a major role.

Switzerland has always been a vehicle for this highly technological form of craftsmanship, and itsexpertiseis incontrovertible. At Matthew Norman, the only Swiss Manufactureof mechanical clocks, the teams work together to create models that followa guiding principle of creativity and renewal. All the production stages take place onsite, ensuring continuity and monitoring throughout the production, finishing, assembly and inspection of the most delicate pieces.

Matthew Norman clocks symbolize the marriageof ancient and modern, brought together in a small object hailing from another era and constantly revisited by guest designers invited to reinvent it. Thanks to the technical innovations that serve their design, Helix and Garden of Eden will enchant admirers of beautiful pieces, horology enthusiasts and fans of technical accomplishments.

Matthew Norman aims to create unexpected objects intended to surprise and captivate. Its products therefore convey a genuine philosophy which endows them with richness, rarity and history.

In this age of multi-connected devices, the choice of a Matthew Norman clock demonstrates an admiration forancestral forms of expertise and anattachment tobeautiful objects. It reveals anappreciation ofthe use of technological innovation to enhance tradition. And also it means embracing a liberated attitude, by choosing an exclusive object designed to last.