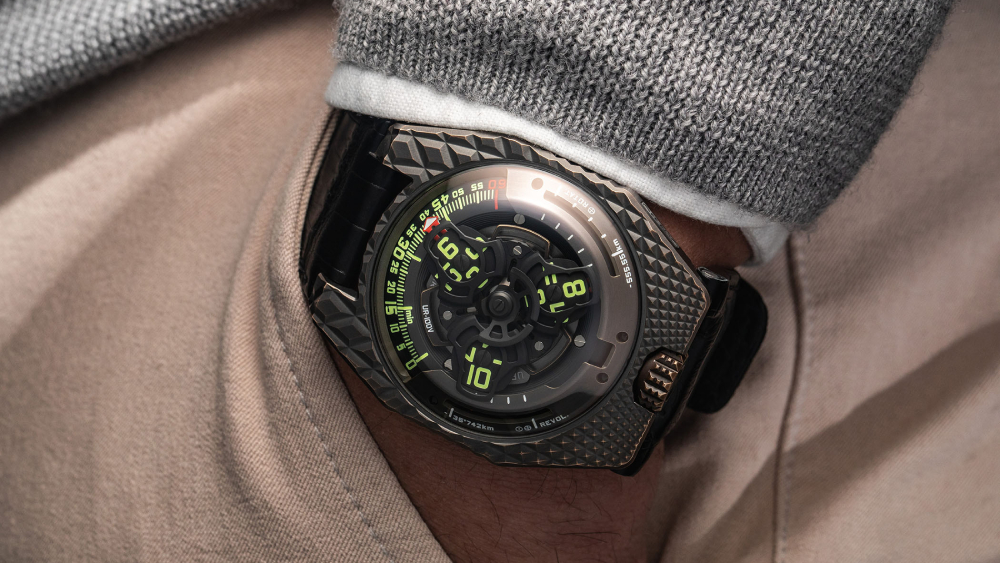 Urwerk’s new release has us pining for a new Bronze Age.

The Swiss manufacturer is known for its conceptual timepieces, but that doesn’t mean it abandons tradition in the process. A version of its UR-100 model, the UR-100V T-Rex takes inspiration from its namesake prehistoric predator to fashion a case as scaly as it is futuristic. To add to its primal feel, the case in question is formed from tough yet beautifully treated bronze.

Measuring 41mm, it has a unique claw-like shape that highlights the design’s textured surface. No ordinary bronze, the team decided upon a special allow that results in a darker, more evenly patinated appearance. Every diamond-shaped facet running across the exterior is precision milled by a computerized machine to lend it its namesake reptilian facade. It is then sandblasted and burnished to give it an aged appearance, as though it was unearthed from an archaeological dig.

The intricate case back of the textured timepiece.  Urwerk

Positioned beneath domed sapphire crystal, the face has a tonal look save for indexes rendered in neon green for both increased legibility and a necessary contrasting pop of color. The house’s proprietary satellite indications (of which there are three, each one representing four hours) rotate on a three-armed carousel with each satellite carrying a red pointer on a 60-minute scale that shows how far our planet has traveled through space during that period. Together, this mechanical ballet is meant to represent the orbit of celestial bodies in miniature.

The case back has a comparatively subdued aesthetic fashioned from PVD-coated titanium with a deep black finish and subtle engravings around the perimeter. This helps protect the UR 12.02 automatic movement with its 40 jewels, which has up to 48 hours of power reserve.