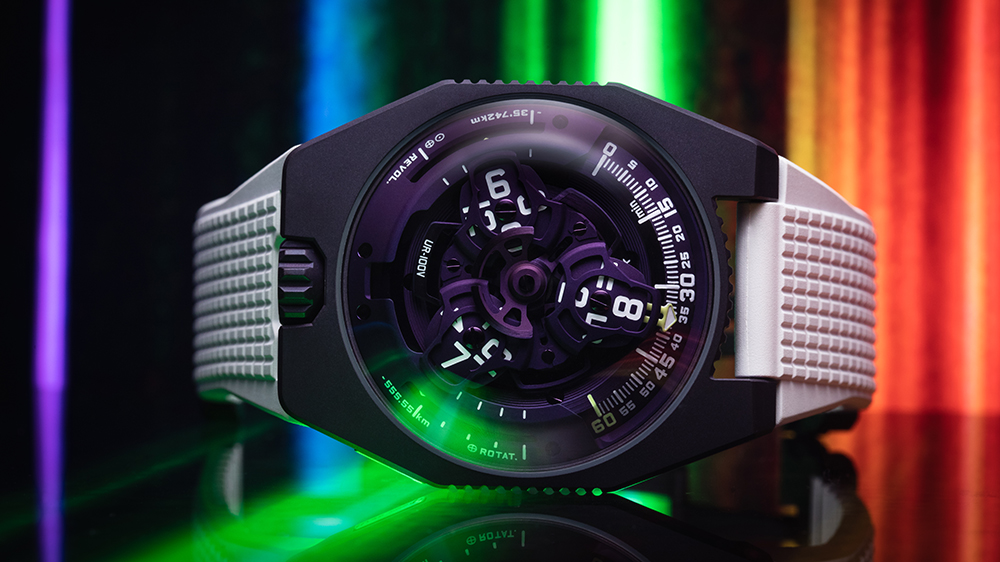 Indeed, the company has just unveiled the new UR-100V Ultraviolet at Geneva Watch Days. The brand’s latest over-the-top timepiece features a grape-colored titanium case that stands out even amongst its bold predecessors.

Why ultraviolet? Because violet is the last hue on the visible color spectrum that the human eye can perceive. Anything past that is a waveform that we can’t make out, called ultraviolet. What better name for a timepiece that attempts to push the boundaries of horological craftsmanship?

Urwerk’s latest is quite possibly the most striking version of the UR-100 yet. Its case measures 41 mm in width by 49.7 mm in height and is constructed from shot-blasted titanium that has been finished in violet diamond-like carbon. A domed sapphire houses the satellite-disc time display which is done up in a rich hue of purple. Its text and numbers are painted white, while the minute pointer and 60-minute mark are neon yellow. Contrasting with all of this is its white textured rubber strap which fastens with a titanium pin buckle.

The timepiece’s color isn’t the only thing that sets it apart from its other family members. It also houses the brand’s new caliber 12.02 self-winding movement, which features a redesigned forged aluminum central carousel finished in purple. This particular modification moves the hour markers closer to the minute scale, making it easier to read the time at a glance. It also has 40 jewels and a power reserve of 48 hours.

“The UR-100V Ultraviolet is about this exploration of the limits,” the watchmaker’s co-founder, Martin Frei, said in a statement. “Our Ultraviolet conveys something mystical, it’s a hue that sits on the border of a dimension we call color.”

The UR-100V Ultraviolet is available now from certified Urwerk dealers. The watch is priced at CHF 55,000 (around $56,300). The watchmaker hasn’t said how many examples it will produce, but Hodinkee reports that the number will only be restricted by production limitations.