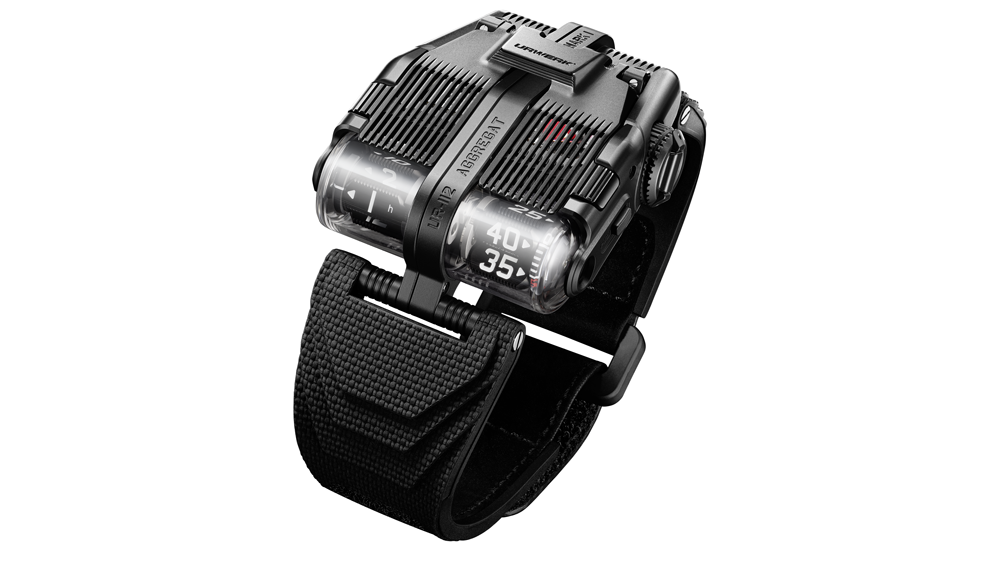 Urwerk’s UR-122 Aggregat may look like a spaceship for the wrist or perhaps what Doc might have dreamed up in Back to the Future but, in fact, its cutting-edge design was actually inspired by designer Ralph Lauren’s personal Bugatti Atlantic. You might be surprised to find out that the founder of America’s most iconic house of preppy style often wears his own Urwerk UR-210, gifted to him by his wife Ricky. Lauren is a well-known watch and car collector but Urwerk seems like an unusual choice for the archetype of classic American style. But when you see him pair it with a black workman’s jumpsuit, it surprisingly all makes sense.

“The inspiration for the 112 line came straight from the USA. Felix and I were lucky enough to discover the impressive car collection of Mr. Ralph Lauren,” says Martin Frei, co-founder of Urwerk, in a statement. “Amongst the rarest models was the Bugatti Atlantic. Wow! It was love at first sight. Its perfect lines, its spine running along its body, its Art Déco features. This Bugatti is a true wonder!  It was the muse that inspired my first drawings of the UR-112.”

While there have been two other iterations of the UR-112, the Aggregat (in PVD-coated titanium with matte grey and black finish) and the Aggregat Odysse (in titanium and steel), the new Aggregat Back to Black (in DLC-treated titanium and steel) is arguably the closest to Mr. Lauren’s Bugatti, which is an ultra-rare all-black vintage Atlantic. It also comes with a new fabric strap featuring some stepped details near the unconventional lugs that somewhat mimic the curvature of the vintage Bugatti Atlantic’s wheel covers if they were turned upside down.

Otherwise, its wild mechanics remain the same. Beneath its hood, which actually lifts up like a car, you can spot the power reserve indication of 48 hours on the left and the seconds indicator framed in red on the right. Time is told via a digital display with rotating aluminum hours and minutes satellite prisms, enhanced with SuperLuminova, operating within sapphire crystal cylinders and driven by two 90-degree bevel gears. In the middle is the transmission shaft which the brand says is likely the longest component in contemporary watchmaking. As such, it is crafted from titanium for lightness and ensures the coupling with the sapphire crystal display module.

“Once again we’ve let our guts speak for us in making a spaceship, a UFO that is a technical challenge,” says Urwerk co-founder, Felix Baumgartner (not to be confused with the guy that actually skydived in space). “This UR-112 is pure madness in terms of the mechanics and the finishes. The energy generated by the UR-112’s central engine is being distributed in four directions along no less than 12 axes. It’s actual mechanical lace. We will only be able to make a very limited number of them, but this is sheer unadulterated watchmaking pleasure!”

Start revving your engines if you want one. Urwerk is a collector’s darling for those that embrace its funky new-age aesthetics, and as such, new releases like this won’t be on the table for long. Past versions, of course, have sold out. While there is no word on how many will be made yet, there will likely be very few. And given that previous versions have retailed for $280,000, seeing one on someone’s wrist will be a rare spotting in the wild.