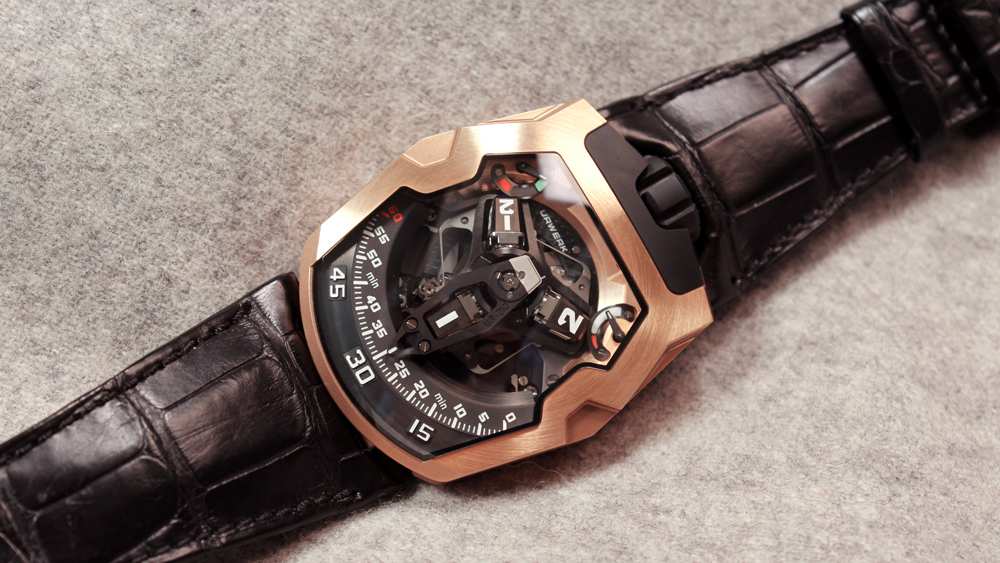 Of the many new-school independent brands on the market, few are as instantly recognizable as Urwerk. Edgy angular cases and out-of-the-ordinary time indications are all part and parcel of the UR experience, and for 20 years now, the brand continues to forge ahead. Its new UR-105 CT Streamliner broke cover this past week as the first of a few pieces coming to commemorate the brand’s two decades of operation.

Coinciding with this new release, we were provided the opportunity to spend a few weeks with one of the brand’s classics: the UR-210 in rose gold ($170,000)—part of the brand’s core collection for the last 5 years.

We’ll be the first to admit that Urwerk’s aesthetics are an acquired taste, but those not content with round cases may well jibe with the UR-210’s unconventional style. The sculpted, luggless, tonneau-style case looks to be quite large on paper, measuring 43.8 mm across and 53.6 mm from tip to tail. Once on the wrist, it certainly isn’t small, but even on 6.75-inch wrists, it doesn’t come across as being the least bit oversized. It’s worth noting that unlike most timepieces on the market, its case is milled from a single piece of rose gold, which, having examined the complexities of its inner edges (especially around the two upper corners), is no small feat.

The openworked dial of the UR-210—a staple seen throughout Urwerk’s Satellite collection—offers an unobstructed view of the brand’s trademarked movement design, which can appear daunting to those unfamiliar to the brand (more on that later). Aside from hours and minutes in retrograde, the 201 also displays both power reserve and winding efficiency.

Confusing as it may look to some, the function of the UR-210 isn’t as complex as it looks. The large pointer (currently surrounding the number two in the image above) is the wearer’s go-to for telling the time. The tip of the pointer sweeps across the minute scale from zero to 60, snapping back to zero at the top of the hour. Using our example above (currently displaying 2:25), as the time reaches roughly 3:10, the block that was used to display one o’clock will begin to rotate 90 degrees to display the number four in preparation for the start of the next hour. For a closer look, watch this video:

The self-winding-caliber UR-7.10 offers a modest power reserve of 39 hours, though it is equipped with a particularly interesting (albeit tricky to explain) feature known as an efficiency indicator. Put simply, a mechanism evaluates the self-winding action of the watch over the last two hours and provides an indication of how well your level of activity has wound the movement’s barrel. Furthermore, the wearer has the ability to select the level of winding, from full to reduced to stopped. In cases of rigorous activity, stopping/locking the rotor will theoretically protect the movement from potential damage.

The UR-210 is the kind of thing that simply can’t fly under the radar, so it’s best left as the only statement piece in your attire. Robert Downey Jr. hit the nail on the head wearing this gold UR-110 while dressed all in black. You could get away with a bold pair of sneakers, but otherwise, keeping it simple is definitely the key to the equation.

The UR-210 in rose gold (and its titanium and steel siblings) can be found through Urwerk’s retail network throughout the continental U.S., which includes locations in New York, Chicago, Los Angeles, San Diego, Miami, and Las Vegas.