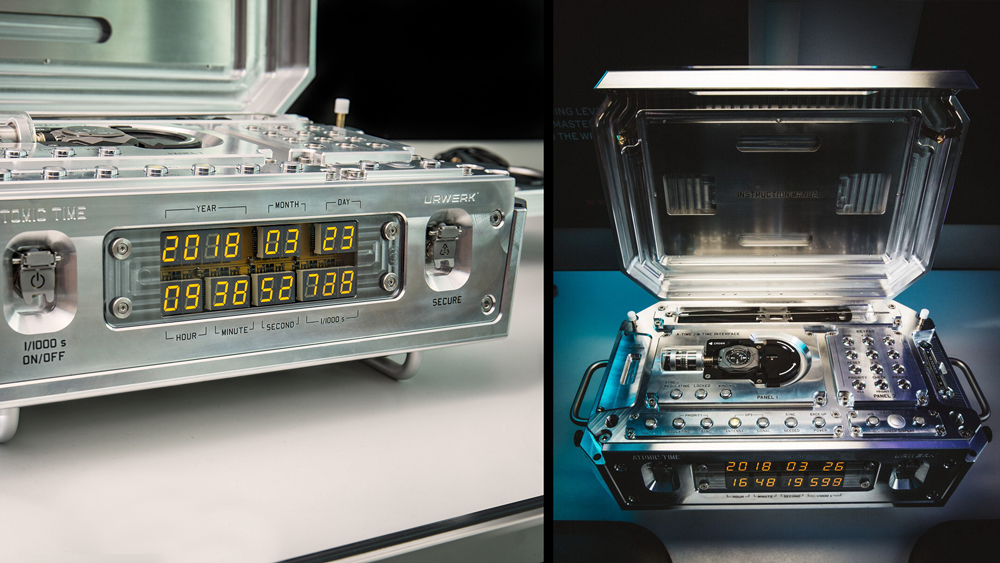 With a bulky stainless-steel body and constantly running digital milliseconds indicator, Urwerk’s latest timekeeping objet closely resembles one of the many atomic bombs James Bond has had to defuse on the silver screen. The comparison may be apt, because Urwerk’s AMC (Atomic Master Clock) is indeed, as its name implies, actually atomic. A high-precision rubidium clock inside AMC powers the display, and through a complex mechanical linkage, synchronizes, regulates and winds a removable Urwerk wristwatch attached to the top of the device.

The 81-pound clock extends a well-known horological legacy, one which company founder Felix Baumgartner, son of a restoration specialist, has been acquainted with since childhood. Abraham-Louis Breguet made a number of “Sympathique” clocks throughout his 18th and early 19th century career that similarly mated with a pocket watch.

“Breguet’s most advanced Sympathique was able to regulate, synchronize, and wind its watch,” says Dominique Buser, head of Urwerk’s R&D department that worked on AMC over a ten-year period. “This is really Urwerk’s modern interpretation.”

Urwerk has experimented with interactive links to the timekeeping vitals of its wristwatches for several years. The EMC (Electro Mechanical Control), released in 2013, used an electronic optical device to check the rate of a mechanical escapement that could then be adjusted. AMC’s functionality is a logical extension of those capabilities. The development team was able to place many of the key mechanisms inside the watch case itself, which can be removed from the clock and placed on a wrist-borne cradle. Nevertheless, the complexity of the atomic clock, which runs at a temperature of 80 degrees Celsius, means that the company will only produce two or three at most with delivery at the end of the year at the earliest.

Price has not yet been determined, but will likely run well into the seven figures. But for lovers of precision timekeeping, the clock may be the ultimate possession. “The rubidium element has a precision of one second every 317 years,” says Buser. “I think it’s enough for us.”