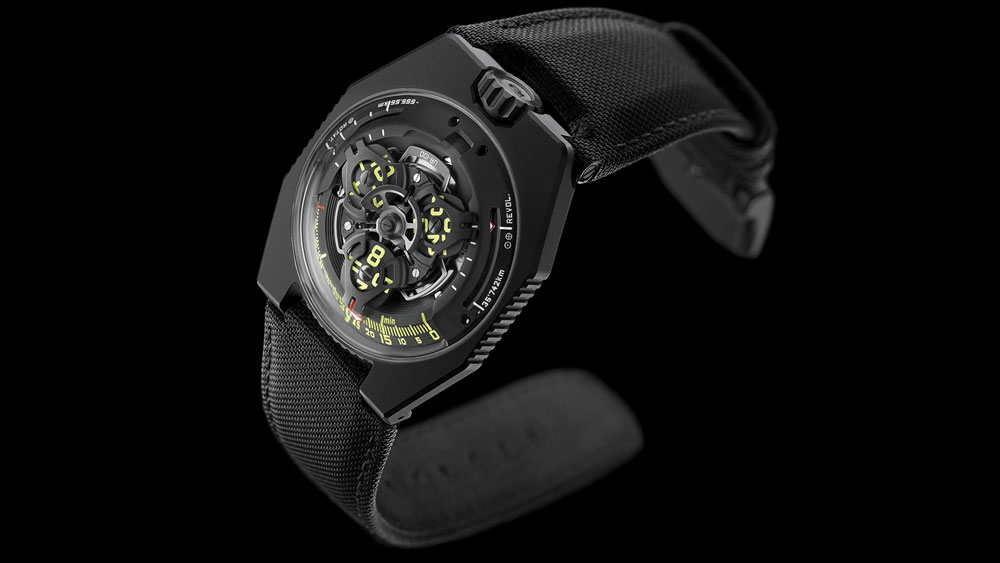 Urwerk has long been known for its unique way of telling time with watches that sit like spaceships on the wrist and tell time via spinning cubes or rotating discs. Even Sci-Fi action hero Robert Downey Jr. is a real life fan. Its latest watch, which is available starting today, packs all of the brand’s out-of-this-world watchmaking into a much slimmer, more wearable timepiece in the UR-100. Longtime Urwerk fans may also recognize somewhat similar design codes in the case from the company’s earliest watches like the UR-101. 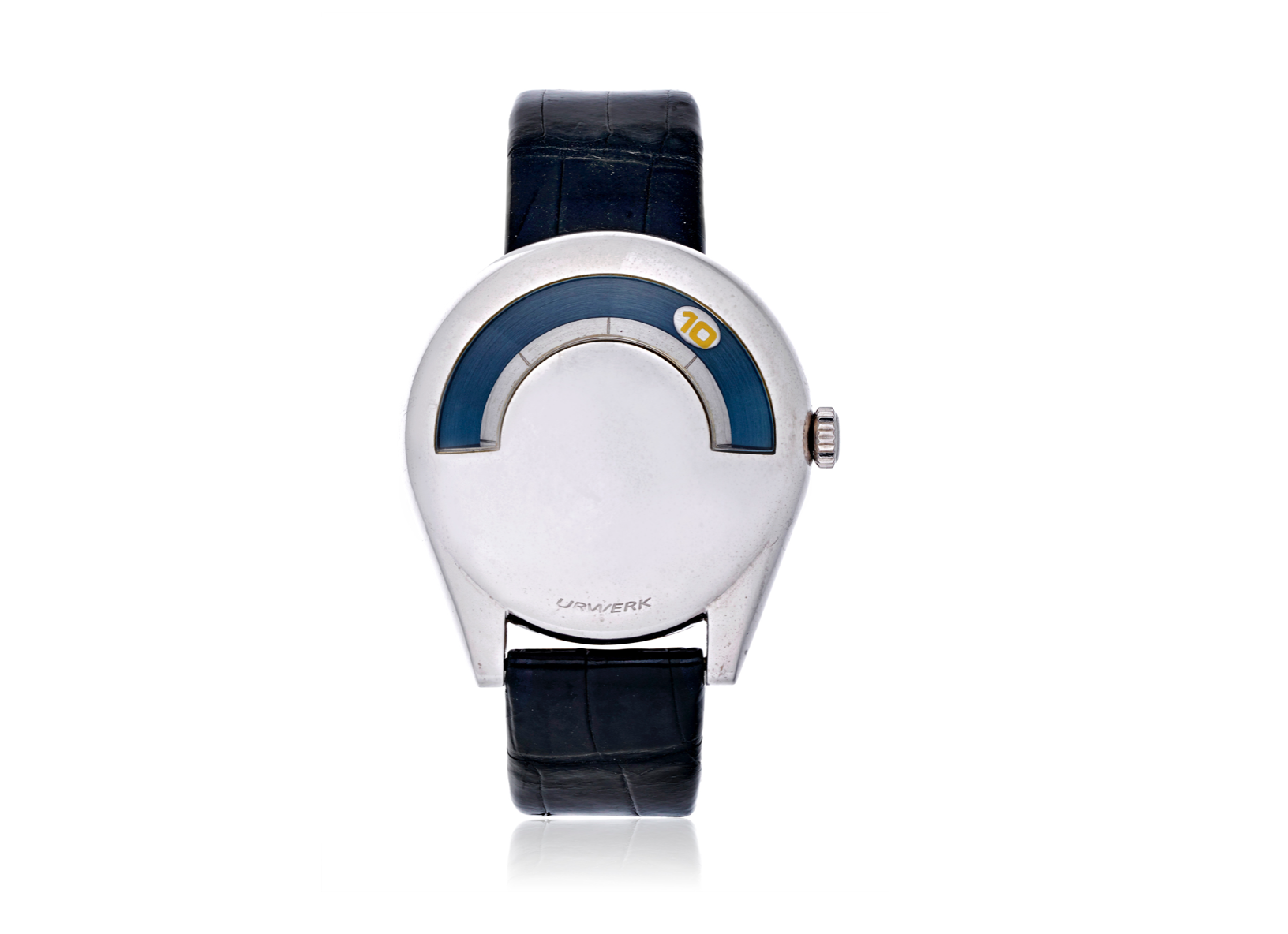 Urwerk UR-101/40 Sold at Christie’s  Courtesy of Christie's

The watch uses Urwerk’s instantly recognizable orbiting hours and minutes indication, but this time it measures just 41 mm x 49.7 mm and 14 mm thick. The UR-110RG watch worn by Downey Jr. in Ironman, while also just 14 mm thick, had a case diameter of 47 mm in comparison. Urwerk’s previous big release, the UR-111C, was only just a millimeter bigger in width and thickness, but still wears larger on the wrist than the new UR-100 SpaceTime. 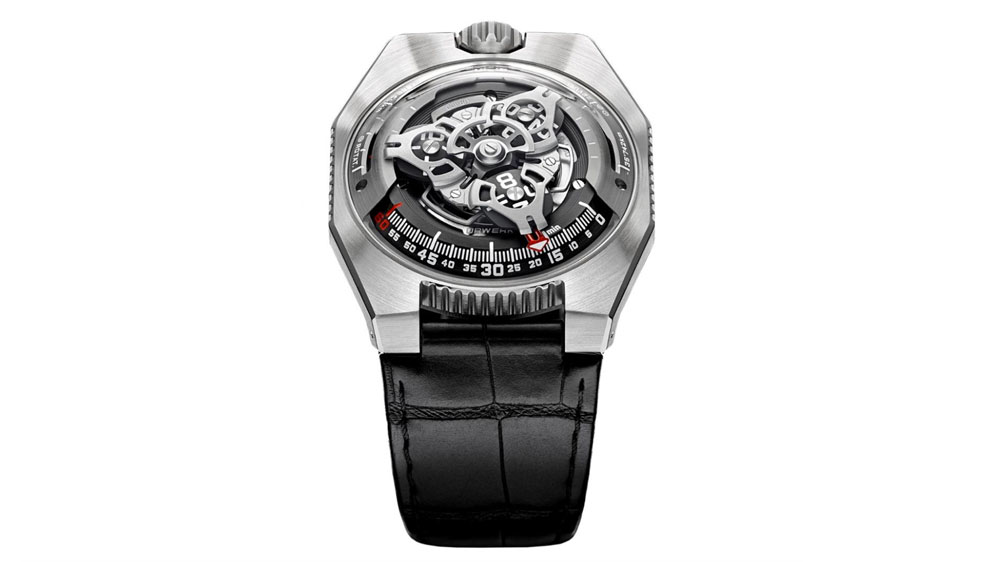 The slimmed down introduction is light on the pockets too—at $49,000 it’s considerably more affordable than the UR-111C, which was limited to 50 and priced at $135,000. But it doesn’t skimp on Urwerk’s radical timekeeping mechanics. What’s different with this piece is that instead of using the red-arrow-tipped minute pointers on the hour satellites jumping back after 60 minutes, like here in the UR-210, or disappearing under the “hood” with each hour completed on the UR-105, the new UR-100 minute arrow passes beneath and between subsidiary dials, reappearing to display intriguing new astronomical indications: distance traveled on Earth and distance traveled by Earth. 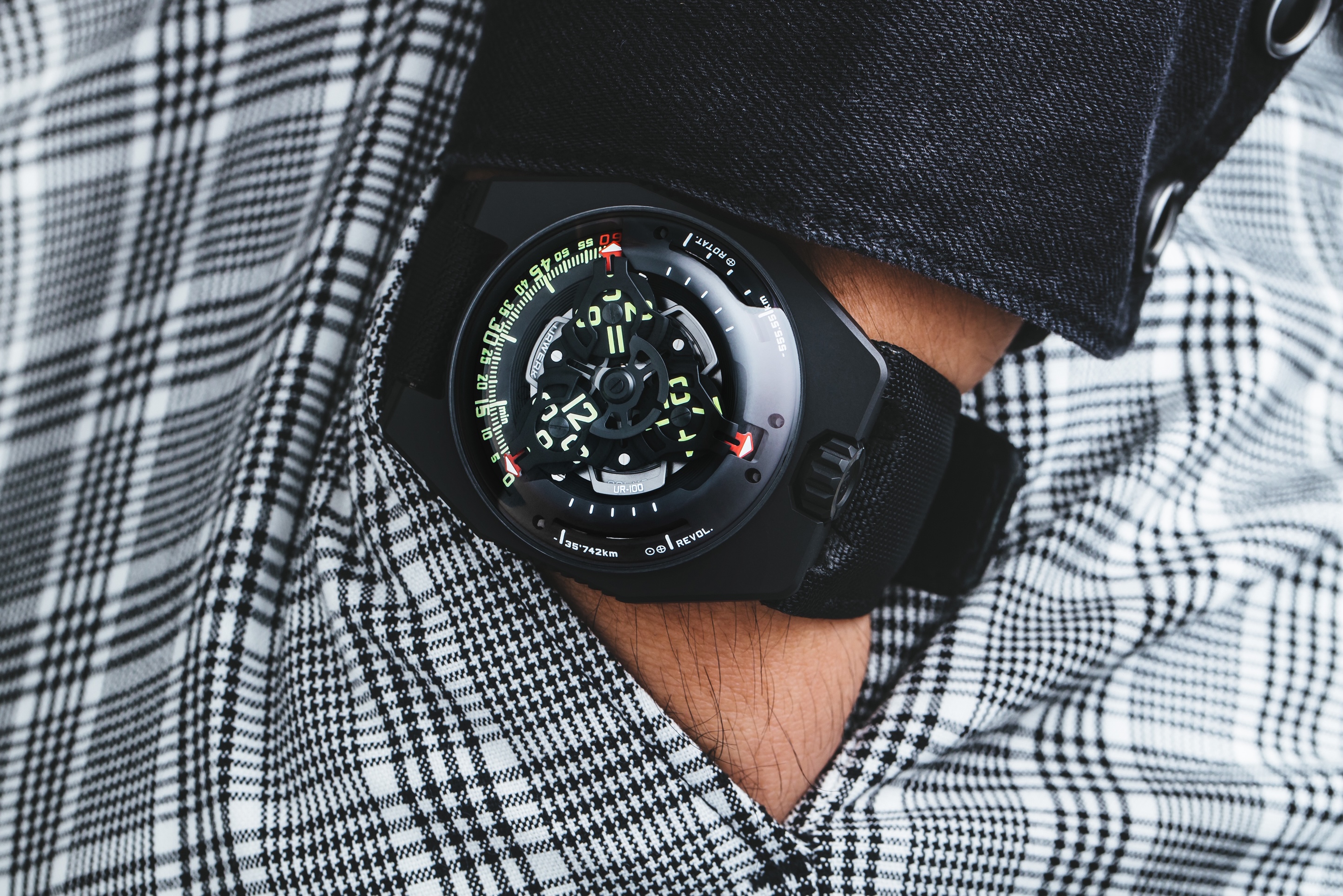 “We make the hand work again but it changes its job,” said Martin Frei, Urwerk’s co-founding partner and chief designer, when he dropped by Robb Report‘s office yesterday to show off the new watch. “That’s the fascinating thing about time. It has many qualities. But one quality that we know is the same as time is, in fact, space. When you look at the side of the watch, you will see the hand appears again to indicate the distance that we traveled around the axis of our planet in just 20 minutes.”

That indication, notated at 10 o’clock, shows the distance in kilometers that are traveled on earth as it spins on its axis at the equator in 20 minutes, covering a distance of 555 km or 345 miles. At 2 o’clock, another hand indicates the distance the Earth has traveled in orbit around the sun—35,740 km or 22,208 miles every 20 minutes. It’s a timepiece with philosophical functions, that reminds its wearer that time in space is not always how we perceive it here on earth. 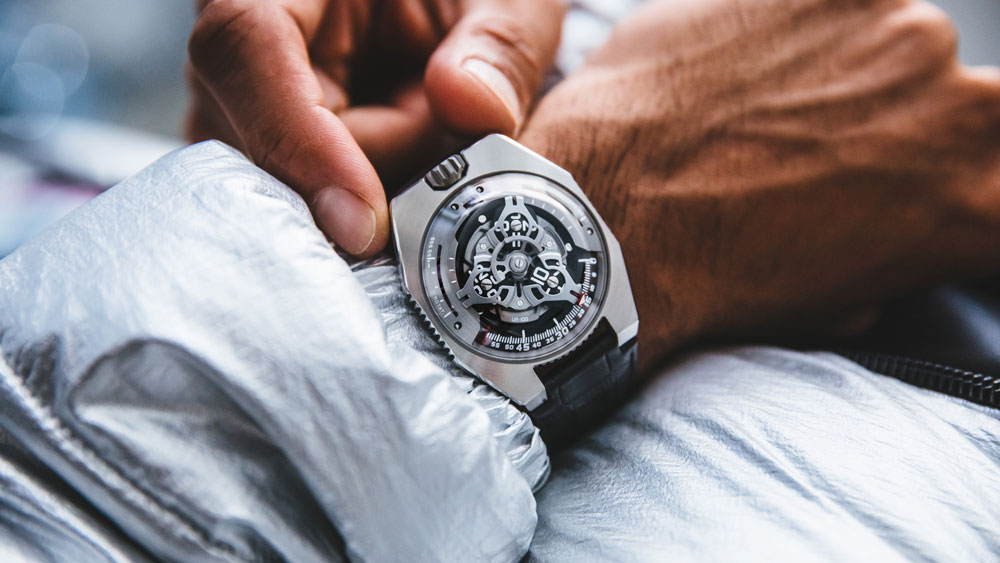 But it took plenty of time to make the UR-100—the watch has been in development for two years. And its new-age design actually takes inspiration from a 19th-century pendulum clock. “My partner, Felix [Baumgartner], the watchmaker, got a clock from his father, who is an antique clock restorer,” said Frei. “The story is that his father found this clock in an antique shop and didn’t understand it and he’s surrounded by clocks everyday and fixes old clocks. It was puzzling. But it indicates exactly the same as we were are doing here with the UR-100. The guy who made it, [Gustave] Sandoz, is the third watchmaker of the French king. First was [François] Berthoud, and [Abraham-Louis] Breguet, and then Sandoz. He created this clock for the 1893 World Fair in Chicago.” 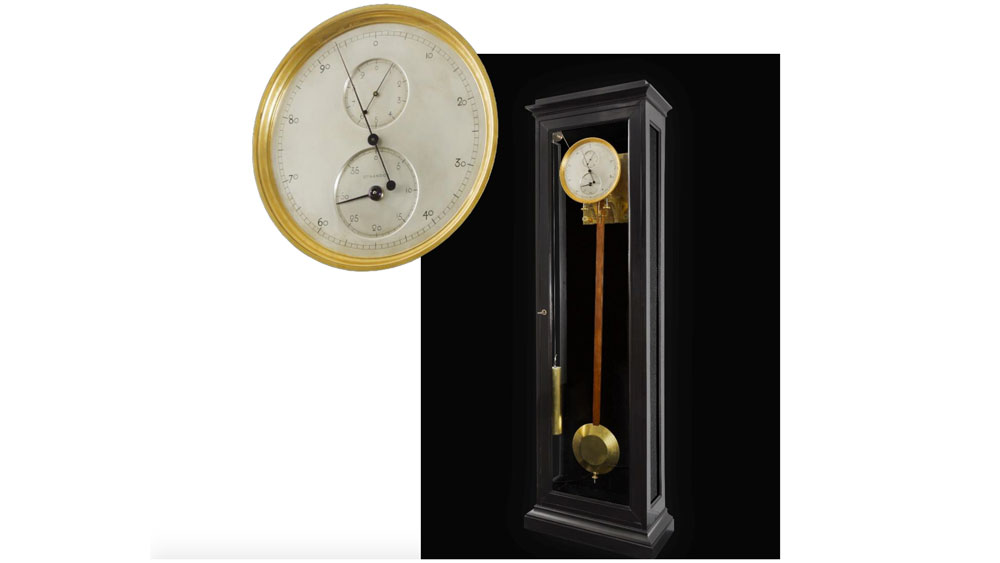 Incredibly, neither the shop owner or Baumgartner’s father knew the value of the clock and so it was purchased for a considerably good price. And when its UR-100 spawns, in a series of 6 editions of 25 watches each, hit stores that antique find will surely pay off. 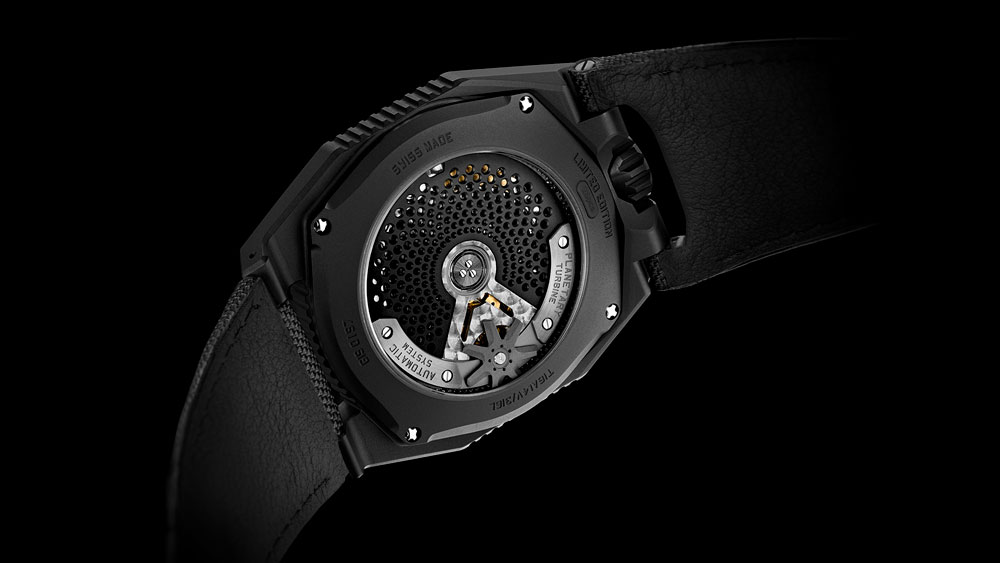 Urwerk UR-100 SpaceTime Back  Courtesy of Urwerk

The SpaceTime is powered by the automatic Caliber 12.01 with a power reserve of 48 hours, a frequency of 4 hz and an automatic winding rotor regulated by a flat turbine called the Windfäng or “air trap” that reduces shock to the rotor, as well as over-winding. It rotates 6 times for every rotation of the winding rotor.

The watch is available today in DLC-coated Titanium and stainless steel.