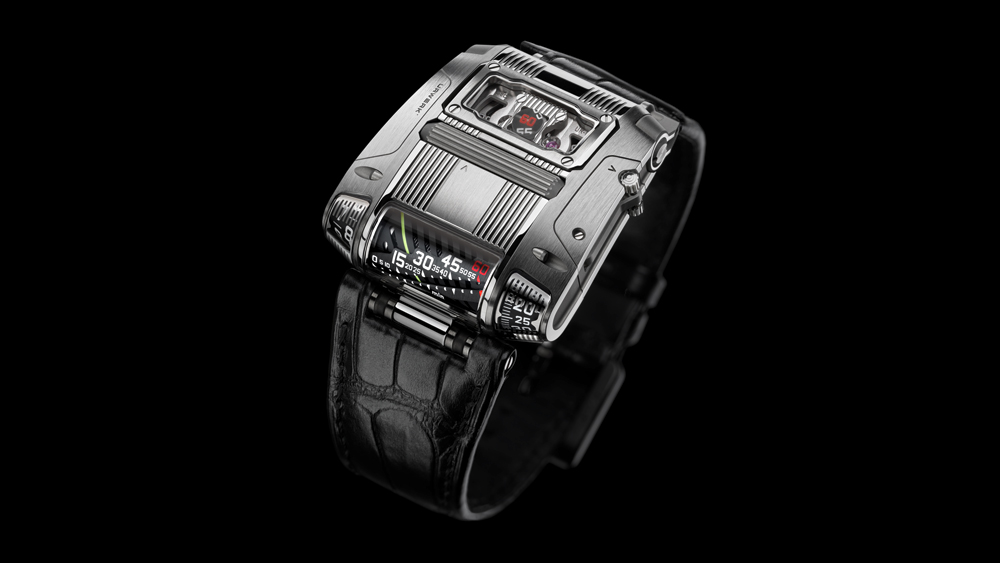 Get in line. Urwerk’s latest wild timekeeping device, the UR-111C (which follows this year’s incredible AMC atomic clock), will be harder to get than a Cabbage Patch doll on Christmas Eve in 1984. Just 50 pieces will be available with only three actually available now—one for the U.S., one for Asia, and one for Europe. And when we met with Urwerk cofounder Felix Baumgartner this morning, a client was already phoning in a purchase. Priority, of course, will go to Urwerk collectors that own at least five—and in some cases 15—from the brand. The $135,000 timepiece comes in a gunmetal, PVD-treated, sandblasted finish or in polished steel and has a unique new case construction, crown, and display of time.

Diverging from Urwerk’s recognizable satellite system for telling time that’s used in watches like the UR-105, UR-110, and UR-210, the new UR-111C uses a long roller crown on the top of the case to set the time. A lever on the side must be pulled out, allowing the roller to move in either direction to set the hour and minutes. The hours and two versions of the minutes are displayed in cylindrical glass sapphire on the right-hand side of the watch (if you are wearing it on your left wrist). That way, when you are driving you never have to lift your hand off the wheel to read the time. The minutes are read in the center of the cylinder and are shown on a linear scale that goes from 0 to 60, which are indicated by a helix marker on an interior cylinder that rotates over the course of an hour. It makes one rapid turn at the top of the hour to bring the minute marker back to zero—also known as a jumping hour.

The hours are shown on a conical drum on the left corner, with the seconds on the right. On the top of the timepiece is the seconds indicator, which is displayed on the left side if worn on the left wrist. “It’s a mechanical digital-seconds indicator, which is down pretty far in the movement in the middle of the case, so we’ve used optical fiber to bring the digital seconds to the top,” says Baumgartner. “Another complex thing in the case is that you do not have a typical case shape with a bottom on the back. There are actually three parts: the middle part, and the left and the right part which are screwed together like a hamburger. It’s a totally unique style of casing.” The movement must be slotted in from the side of the case once the panels are removed and the time-setting lever is dismantled.

To that end, production proved challenging, and the timepiece has been roughly three years in the making according to Baumgartner. The Urwerk manufacture, composed of 17 watchmakers, can only deliver three pieces worldwide per month.

The watch is big, and it should be—after all, a timepiece like this is meant to be a talking piece. However, at 42 mm wide, 46 mm long, and 15 mm thick, it’s surprisingly not as big on the wrist as one would expect (it can fit comfortably on a man or a woman’s wrist), but it still delivers all of the impact worthy of the creativity of the independent brand. The UR-111C, which features 48 hours of power reserve, is available now, with just one timepiece currently available in the U.S.