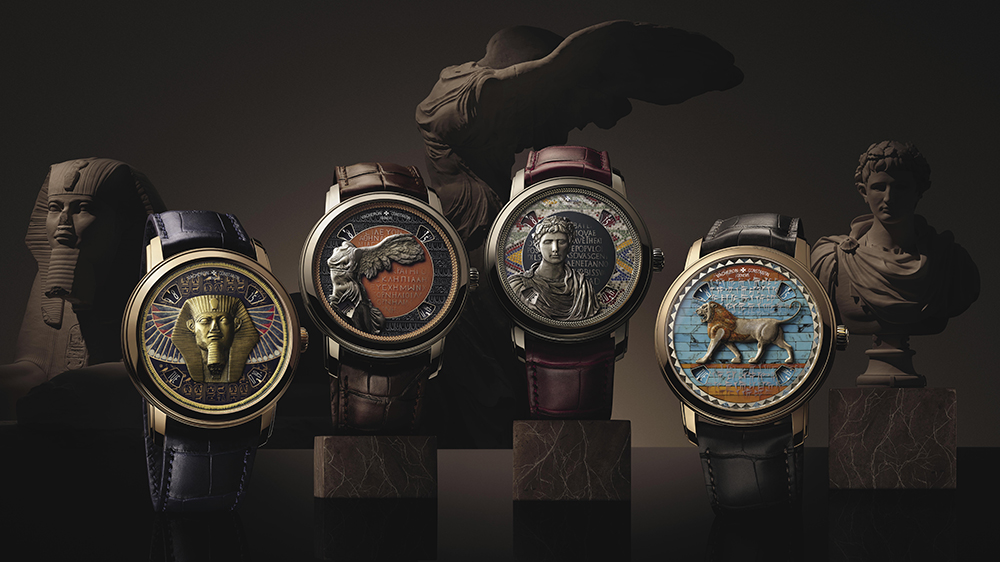 Time travel isn’t a reality yet, but Vacheron Constantin’s latest drop may be the next best thing.

The Swiss watchmaker has collaborated with the Louvre Museum to release four new Métiers d’Art watches that pay tribute to great civilizations of the past. Each timepiece references a different epoch, including the Persian Empire of Darius the Great, the golden age of Ancient Egypt, the Hellenistic period of Ancient Greece and the rise to power of Augustus. The face of each watch, like an artwork unto itself, reflects a major period-specific work inside the famed Paris museum, while other decorative elements reference its era.

The oldest civilization of the four is the Ancient Egyptian Empire that dates back to 2035–1680 BC. The watch aligned with that period is the Grand sphinx de Tanis, which features the sphinx, a royal symbol, in a carved gold applique. Next, the Lion de Darius spotlights the Persian Empire of the Achaemenids (559-300 BC), and is emblazoned with a bright blue glazed brick decoration topped by a roaring lion.

Marking the Hellenistic Greece of the Antigonid dynasty (227–168 BC), the Victoire de Samothrace timepiece features the iconic statue of Victory and grisaille enameling that depicts friezes taken from two Greek vases. Lastly, the Buste d’ Auguste is made to reflect the Roman Empire of the Julio-Claudians (27 BC–68 AD). It dons a bust of Octavian Augustus, Caesar’s adopted son, and has a colorful micro-mosaic composed of 660 stones.

The thematic watches, which will be limited to just five examples each, have 42mm case designs in 18-karat pink and white gold variations. Inside, meanwhile, Vacheron Constantin’s self-winding 2460 G4/2 calibre movement—which has four discs indicating the hours, minutes, days and dates—powers the timepieces and delivers 28,800 vph, alongside a 40-hour power reserve. For those that like to see the horological wheels in motion, a transparent sapphire crystal caseback offers a partial view the magic inside.

Of course, the ornate dials and their surrounding friezes are the real showstoppers for these pieces. According to the Swiss watchmaker, both were composed of decorative elements taken from various artworks of the same time period as the ones depicted in their sculpted appliqués. That feat is accomplished, in part, with special enameling that was applied to the watch’s metal surfaces. Stone marquetry, a rarely used watchmaking technique, helped form the watches’ ornate patterns using fragments of precisely placed colored stones.

To create the stunning micro mosaics on each piece, Vacheron Constantin’s artisans carefully assembled and glued tiny hard stones (0.55 millimeters each) down in formations that were inspired by each Ancient civilization referenced. The watch designs were then completed with hand engraving.

Prices for the Métiers d’Art tribute watches are available upon request. With only five examples of each, we expect collectors to snap them up fast. Visit the Vacheron Constantin website for more information.