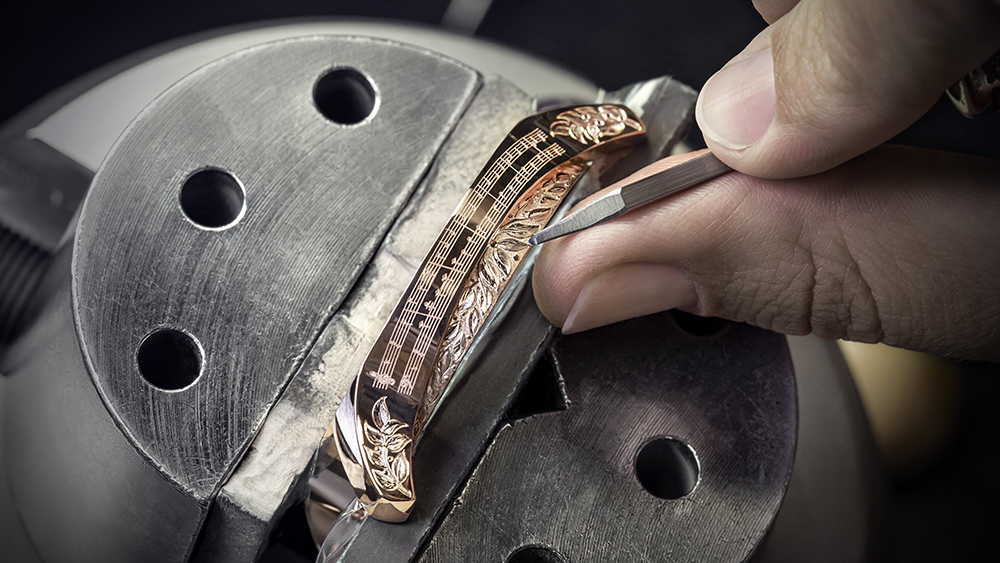 Vacheron Constantin style and heritage director Christian Selmoni is talking about horse pee. Definitely “pee.” I checked (twice) in case I’d misheard, and yes, in between talk of métiers d’art and pièce unique chiming watches dreamed up by Geneva’s oldest watchmaker and given six-figure price tags, our conversation appears to have strayed into the stable yard.

Not without good reason. Many moons ago, Selmoni explains, watchmakers used horse urine, specifically that of mares, to harden the steel gongs found in early minute-repeating watches. They’d heat the steel up to around 1,000 degrees Celsius and then cool it in the salty equine infusion, whereupon a crystallizing process would take place, hardening the outside of the steel without compromising its flexibility.

“We don’t use this technique anymore,” says the 60-year-old, a knowing smile curling quietly across his face. “But what I can say is that if you are a customer of Les Cabinotiers and you would like your minute repeater to be dipped in pee, we are more than happy to accede to your request.”

It’s mid-morning on a sizzling day in Singapore, and the longtime servant (30 years and counting) of the venerable Swiss maison has allowed himself the luxury of removing his jacket, but not his tie. Despite the heat and the jet lag, Selmoni is doing his best to offer up some temperate reflections on Vacheron Constantin’s latest Les Cabinotiers collection, dubbed La Musique du Temps. Although, as he’s keen to point out, it’s not a collection.

“It’s really not,” he says. “By definition, Les Cabinotiers is about pièces uniques. If we take our product offer like a pyramid, Les Cabinotiers is at the very top, the summit of Vacheron Constantin in terms of watchmaking and decorative crafts. I can’t compare it with the [core] collection. If we were a car manufacturer, it would be our Formula 1 team.”

The division behind Les Cabinotiers was founded in 2006. The idea, Selmoni explains, was “to reconnect with unique timepieces made to order in the past.” That tradition, he says, continued from the 18th century into the 20th and stopped not long after the Second World War.

At first, Les Cabinotiers was a commission-only service known as Atelier Cabinotiers. Much as a superyacht manufacturer could spec a boat to a customer’s tastes, so too would Vacheron create a personal timepiece to suit almost any whim. Selmoni describes the atelier as both “a small workshop dedicated to our clients’ desires” and “a laboratory to demonstrate what we are able to do in terms of watchmaking.”

One of its first watches, delivered for an unnamed client in 2011, was the Vladimir, an astronomical piece with 891 components and 17 complications. Despite being one of the most complicated watches ever made, it was merely a harbinger of what was to come. In 2015, conveniently coinciding with Vacheron’s 260th anniversary, the division delivered the Reference 57260 pocket watch, which, with 57 complications, remains by some margin the most complicated mechanical watch ever created.

“That was the first major order for Les Cabinotiers,” says Selmoni, noting that it was commissioned before the Vladimir. “It took us eight years to complete.”

After Louis Ferla took over as CEO of Vacheron Constantin in 2017, the atelier evolved. Instead of waiting for customer orders, the company decided to produce a series of one-off pieces and offer them to customers. In late 2017 it launched the concept in Kyoto; in 2018 it unveiled Les Cabinotiers Mécaniques Sauvages, inspired by the animal kingdom, in Paris.

Les Cabinotiers La Musique du Temps, being presented here in Singapore, is a 40-odd-piece collection—or perhaps a symphony?—of chiming watches, which couldn’t be more classical if they pranced around Salzburg in ruffs while trilling The Magic Flute. That they’re all one-offs—from the Minute Repeater Ultra-Thin, with its deceptively simple forward profile, to the gloriously complex Symphonia Grande Sonnerie “The Sixth Symphony” (which has grande and petite sonneries and a case engraved with part of the score from Beethoven’s Sixth Symphony)—beggars belief. All that effort—and for just one of each watch! Commensurate with their rarity, prices start around $150,000, and from there, says Selmoni, “the sky’s the limit.”

The 2015 Reference 57260 pocket watch is equipped with 57 complications.  Courtesy of Vacheron Constantin

Vacheron Constantin’s expertise in the field of watches that sound the hour or chime the time on demand needs no introduction, but by amplifying those skills, the company has invited questions about its ambitions to advance chiming-watch technology. In recent years, loudness has become a new battleground, and Audemars Piguet and Ulysse Nardin have been turning up the volume.

Is Vacheron sounding its intentions to join the fray? “The answer could be yes, if we want to compete with the [Audemars Piguet] Supersonnerie, for example,” says Selmoni. “But I wish good luck to anyone who tries. No, our purpose is to be loud enough to be heard in a noisy environment, crystal clear and harmonious.”

To illustrate the difference, he produces a pair of watches: one of Vacheron’s ultra-thin minute repeaters powered by caliber 1731 (which is just 3.9 mm thick) and one with the larger caliber 2755 QP (which has a perpetual calendar and is 7.9 mm thick). I’m no Mozart and the room is full of chatter, but to my ear, the latter is richer, clearer and perhaps even louder. “It’s much more difficult to tune a minute repeater when the movement is so thin,” he says. “I think we can improve it.”

That development process will take place at the manufacture in Switzerland, but records of Vacheron’s aural achievements will be logged in the UK. The company now records the chimes of every minute repeater it makes in Studio 2 of London’s Abbey Road Studios, which still echoes with the sounds of the Beatles and Pink Floyd.

“We’ve actually been recording all our minute repeaters since 1992,” says Selmoni. “Because when the watches come back for service, we have to make sure that when we deliver them back, they sound the same.”

The Symphonia Grande Sonnerie features a treble clef tracking 20 hours of power reserve for the strikework.  Courtesy of Vacheron Constantin

Les Cabinotiers pieces, especially those with grand complications such as minute repeaters, have been popular with Asian buyers, thanks to an increase in spending power in China and elsewhere. To be sure, it’s no coincidence that the company has held two of the three collection previews in Asian cities. But given the current environment, the watches may have a hard time finding a home on the other side of the world. Luca Solca, a Geneva-based luxury analyst at Sanford C. Bernstein, says that, as a result of the novel coronavirus, he expects Chinese spending to fall 50 percent in the first quarter of 2020, compared to the same period last year, and 30 percent in the second quarter, before rebounding by 10 percent in the second half of 2020. This forecast applies to wherever Chinese nationals spend money in aggregate, including mainland China, Hong Kong, Macau, Japan and Europe, which is to say everywhere. And those predictions operate on the assumption that the pandemic resolves swiftly.

Despite evidence suggesting Vacheron is heavily reliant on China (39 of its 89 boutiques are there), Selmoni insists that Les Cabinotiers isn’t targeted at the Chinese and that customers come from all over the world. (At press time, Covid-19 had become a global pandemic, and Chinese cases appeared to have peaked.) He also says anyone can buy or commission—that service continues—a Les Cabinotiers piece. The only qualifying criterion is being able to afford it.

“It’s a very simple, very natural process in which the client meets the brand and we do something together,” he says of the commissioned timepieces. “In 80 percent of cases, our clients don’t know exactly what they want. They want a unique piece, they want something complicated, something special, but they have no real idea of what they want. We say the sky’s the limit, and we can prove it, because we did the 57260.”

The company does not reveal quantities of these one-offs—fuel for the mystique—but it appears likely there are now around 100 Les Cabinotiers pieces in circulation.

“I bought my Les Cabinotiers piece from a collector in Asia,” says Robert, an East Coast collector who runs a philanthropic-strategy company. “He offered it to me directly because we had met before and he knew I was a serious Vacheron Constantin collector. It’s a rose-gold watch with a grand feu enamel dial from 2008 and is a [custom] time-only version of a Historiques Chronomètre Royal 1907. It’s the only version with indigo-blue numerals and writing on the dial. It also has Vacheron’s signature Maltese cross on the dial just under the 6, which wasn’t included on the production model.”

Exchanges like this one almost always happen behind closed doors. Rebecca Ross, a Christie’s watch specialist, describes Les Cabinotiers as auction rarities. Only one has landed on the block in recent memory: a platinum double-faced perpetual-calendar minute repeater, which sold for $435,000 at Christie’s Important Watches auction in March 2019 in Dubai.

Alex Ghotbi, head of watches for continental Europe and the Middle East at Phillips and a former Vacheron Constantin employee, says the reason for their scarcity on the open market is twofold: “Because Les Cabinotiers started off as bespoke pieces, they’re not necessarily easy to sell. But also, the owner doesn’t want to let go of it. They have a personal relationship with the watch.” Ghotbi attributes the lag in the non-custom pieces to the fact that the company has been making them for only a few years. “Vacheron isn’t one of these brands where people just buy a watch and flip it to make some cash,” says Ghotbi. “It’s not that kind of clientele and it’s not that kind of brand. Most of the people who buy these watches are buying them for the love of the mechanics and design. They want to hold on to them.”

The commissioning client is also, literally, investing in a huge amount of time. When the watch is six figures or more, executing it can take years of patience, according to Ruediger Albers, president of Wempe Jewelers, one of New York City’s most important boutiques. “It’s usually an existing customer that inquires about Les Cabinotiers timepieces,” says Albers. “It’s a very exclusive little club, and they fall in love with all the different aspects of the artistry.”

“It’s a big responsibility to create Les Cabinotiers pieces,” says Selmoni. “These watches incorporate all our skills at Vacheron Constantin. The watches are very high value, but we have to make sure they’re not bling—that they embody all the qualities you would expect from Vacheron Constantin.”

Even if that means a dip in horse pee.