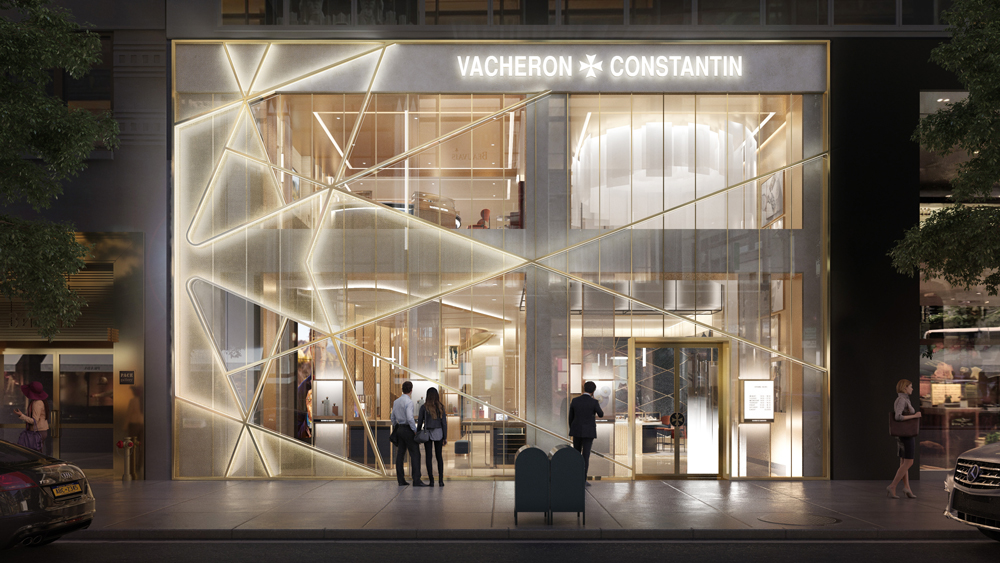 Vacheron Constantin has not been resting on its laurels during the pandemic. As the world begins to emerge from over a year in seclusion, the watchmaker has revealed two immense projects it’s been keeping up its sleeve.

First was the exacting historical remake of one of the first American 1921 watches, made exactly as it was crafted a century ago—a painstaking project that took approximately 15 months and showed off not only the skill of its in-house watchmakers but also the enormous depth of its heritage department and archives. Now, the brand has unveiled a brand-new two-story flagship at 28 East 57th Street in New York City. It’s the largest Vacheron Constantin boutique in the world, and at 4,500-square-feet, it’s also four times the size of its previous (and now-shuttered) Manhattan boutique at 64th and Madison.

So, what do they have in store? For a start, the one-of-a-kind American 1921 remake will be on display at the boutique through October before going on a world tour. Vacheron Constantin hasn’t said whether it will offer it up for sale to a collector, but it certainly wouldn’t hurt to ask if your pockets are deep enough. According to the company, it’s been fielding numerous inquiries already.

What is for sale is the first permanent collection of the company’s “Les Collectionneurs” vintage watches, ranging in price from approximately $15,000 to $300,000, and located at the top of the stairs on the second floor. A highlight is an 18-karat yellow-gold dual time “Prestige de la France” wristwatch with an asymmetrical case and a gilt vertical satine dial ($58,000). Another first comes with the arrival of its elite and one-of-a-kind “Les Cabinotiers” pieces. Reserved for VVIP collectors, they have never been available to purchase or view within a boutique until now. Kept off the floor and available to view only upon request, there are currently four on hand in the new flagship. According to the brand’s CEO, Louis Ferla, only 25 are made each year.

But for those on the hunt for the latest series-produced models, the Patrimonie, FiftySix, Égerie and high-complication timepieces are located at the entrance, while upstairs plays host to the Traditionelle and American Historiques 1921 collections. Also on the second floor is a rather nifty custom strap bar—something the brand has offered by order or at special traveling exhibitions and events, but the first in-store of its kind—which allows clients to customize straps on-site by color and material, as well as monogramming and embossing. In some instances, you can even have your signature or a special drawing put on the inside of a strap. The bar sits next to the in-house watchmaker, who works in an open space in an effort to encourage interaction. Just behind that setup is a soundproof VIP lounge for clients that need extra attention. This space will also be used for private dinners and events.

But New York isn’t the only city that is getting first-class treatment from Vacheron. CEO Louis Ferla told Robb Report that the new boutique is part of a broader brick-and-mortar plan. “We will have, probably, three or four other flagships around the world over the next three to four years in key cities like London—and we are opening another one in Tokyo before the end of the year,” he says. “Those will also be very strong statements. And we will potentially open one in China as well. But New York will remain the largest in the world in terms of scale.”

Ferla also emphasized that each boutique will play to the characteristics and culture of each city. To that end, the 57th Street location greets guests with bronze renderings of lit-up skyscrapers interlaced with tracks and mobile cars that zoom around their exteriors. The art installation was inspired by late American artist Chris Burden’s Metropolis II (2010) and is the first brand collaboration executed by his estate since he died 2015. A larger version will be built for the façade of the store this summer. Other installations will follow.

Thanks to the experiential nature of the store, there are more reasons to make the journey than just to purchase a watch. To the right of the entrance is a giant touch screen called the Chronogram, which allows visitors to dig around the archives for various countries from the U.S. to the Netherlands. You can even read old letters from clients dating back to the days when one had to ask for a price tag via a handwritten letter. In the back right of the store is a room dedicated to its heritage pieces that will change displays every three to four months.

And, if you need an excuse to convince your family to let you drop in with the little ones in tow, upstairs behind a bar-shaped watch display and roomy and lengthy lounge couch, the brand has wisely stocked games for children to keep them occupied while you consider the family heirloom.

The boutique is currently open by appointment only with an official opening slated for September. When we dropped by clients were already perched in front of salespeople inspecting their next purchase. No time like the present.