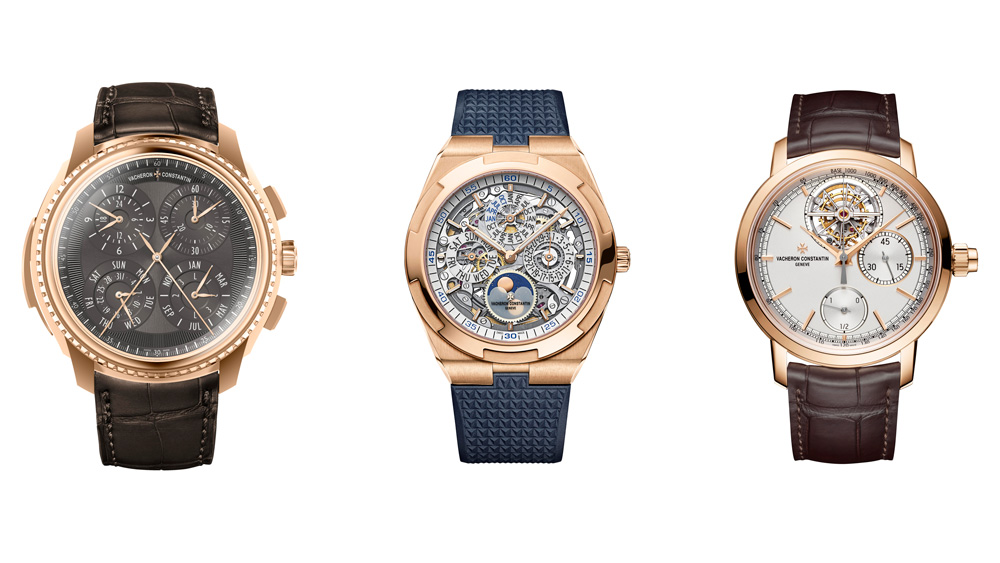 Vacheron Constantin is clearly bullish on the demand for ultra-high-end watches in the coming year. The brand’s 2020 launches, introduced today as part of a virtual Watches & Wonder show, fall mostly into the realm of exclusive high watchmaking. All of the new pieces are gold, and most are complicated.

Vacheron Constantin knows a thing or two about chiming watches, having created its first example in 1806. It has moved on from there to incrementally higher levels of complexity and refinement, culminating this week in the Grand Complication Split Seconds Chronograph Tempo, Vacheron Constantin’s most complex wristwatch yet. The Tempo presents the minute repeater at its most impressive, combined with a split-seconds chronograph and perpetual calendar, which, together with a minute repeater officially constitute a grand complication. The Tempo goes beyond that for a total of 24 complications displayed on two dials, front and back.

The movement, caliber 2756, has 1,163 components, and was developed by the same team that created the Reference 57260, the world’s most complicated watch. One of its unique technical features is something called a split-seconds lifting lever, which is designed to save energy used for the power-hungry chronograph, resulting in a 65-hour power reserve, lasting up to 40 hours even with the chronograph activated.

On the front dial, the split-seconds chronograph counters share space with timekeeping and perpetual calendar functions on four large subdials of equal size. Upper left indicates hours and a 24-hour second time zone; upper right shows minutes and the chronograph 30-minute counter; lower left is for the day and date; lower right is the month and leap year indicator. The split-seconds chronograph hands are at the center, and the minute repeater is activated by a lever on the left case side.

The back dial (which can be swiveled to face the wearer) displays the astronomical complications, including solar time, running equation of time, sunrise and sunset, day/night indication and moon phase. This multitude of indications is surprisingly easy to read, partly because the dial is so big (50 mm), with room to spare on the outer edge for a guilloché pattern. The central hands indicate solar time, symbolized by a sun motif on the minutes hand. Sunrise and sunset is positioned at 3 o’clock, and the duration of day and night are shown at 9 o’clock. Age and phase of the moon occupy the 6 o’clock position – and it’s one of those ultra-accurate moon indications that needs correction only once every 1,000 years, so basically, never. The tourbillon dominates the 12 o’clock position, with a serpentine shaped hand running across it to gauge power reserve.

The case is 18-karat pink gold, with a brown alligator strap. Like all pieces in the Vacheron Constantin Cabinotiers collection, the Tempo is one-of-a-kind. It is part of La Musique du Temps series ofexceptional chiming watches. The unique sound of each is being recorded at London’s famous Abbey Road Studios.

In its new Overseas Perpetual Calendar Ultra-Thin, Vacheron Constantin exercises Vacheron exercises more subdued feats of micro-engineering in the skeletonized version. The movement, caliber 1120 QPSQ, consists of 276 components and an automatic winding system, yet measures a mere 4.05 mm thick with a case measuring just 8.1 mm thick. Its base was used previously in the Traditionelle Openworked model of 2009, minus the perpetual calendar function, and it has a 40-hour power reserve and a 22-karat gold rotor. The skeletonized version is delivered on a gold bracelet but comes with two additional straps in blue alligator leather and blue rubber.

A new tourbillon/monopusher chronograph combination in the Traditionelle collection takes the gentrification of the sports watch to a new level. The watch has the familiar classic elements of the Traditionelle collection, including the etagé (stepped) case and lugs, fluted caseback, railway minute track and dauphine hands, but now there is a chronograph function and a sporty tachymeter scale. There are also a couple of neat engineering tricks on this watch.

First, a new carriage configuration means the tourbillon carriage is set in motion by an intermediate wheel of the running seconds display instead of being driven by the pinion of the fourth wheel, which in layman’s terms means there is a much wider opening in the plate and thus a more spectacular view of the tourbillon in action. Secondly, an activation system known as “all-or-nothing” prevents the chronograph mechanism from engaging when insufficient pressure is exerted on the pusher, which could damage the movement. The watch revives the spirit of the vintage pocket chronographs that inspired it by using a single pusher for start, stop and reset functions. The manual-wound chronograph caliber 3200, first introduced in 2015 in the Harmony chronograph, is low frequency (2.5 Hz), which makes the beating of the tourbillon visually easy to follow.

The Traditionnelle Tourbillon is the brand’s first tourbillon for ladies, and given the carat count, there is no question this is a watch intended for women—although it will likely appeal to male consumers in certain markets. The bezel, case and tourbillon diadem are set with 291 diamonds totaling 3.57 carats. A full jewelry version is set with 559 brilliant-cut and baguette-cut diamonds totaling more than 6.5 carats.

The movement, automatic caliber 2160, is a slender 5.65 mm thick thanks to a peripheral rotor, while the case,  is 39 mm wide and 11.22 mm thick—a sizable showpiece for a woman’s wrist while still being large enough to suit a man should he want an iced-out Vacheron. It has an 80-hour power reserve and a small seconds display that is so discreet you could easily miss it—a small blackened screw on the front bar of the tourbillon carriage counts the seconds as it rotates. You won’t know the exact second, since instead of an index, there is a row of diamonds set into the flange on the periphery of the tourbillon opening, but if you need to know the exact second, there is a nice monopusher chronograph tourbillon in the same collection (see above). The version with a mother-of-pearl dial and 291 diamonds is priced at $142,000. The jewelry version, in white gold with 559 diamonds, is boutique-only, priced at $197,000, and delivered on a blue satin strap and a second blue strap in alligator leather.

For those with a taste for something more everyday and slightly more accessible, the vintage-inspired Fiftysix has been given a new sepia brown dial in both automatic and complete calendar versions. These revisited versions of the 1956 model from Vacheron archives both have 18-karat red gold cases and are priced at $18,700 for the automatic and $33,700 for the complete calendar.