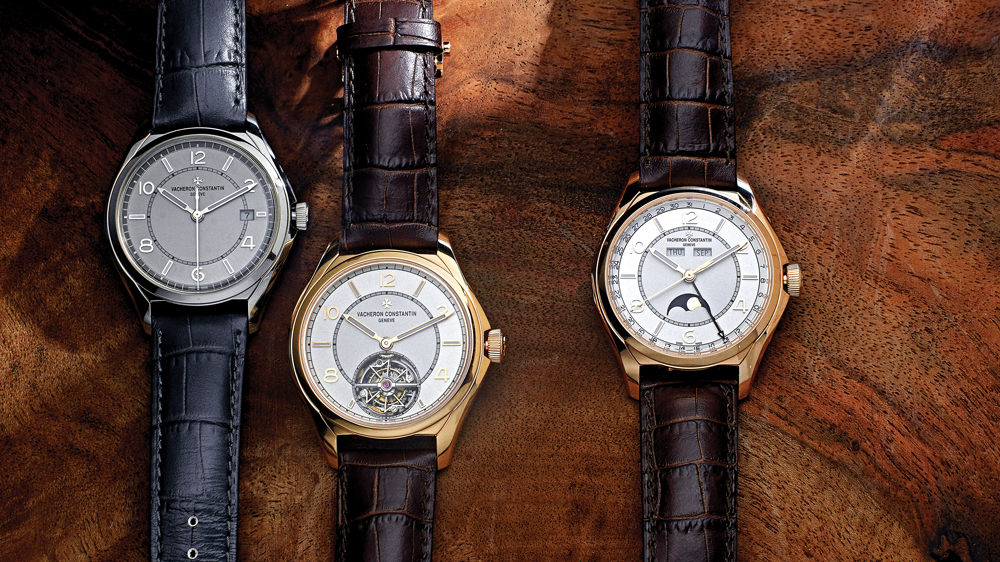 There was very little talk of newness at the recent launch of Vacheron Constantin’s Fiftysix collection. Held over a two-day period in London, company executives discussed tradition and the historical roots behind the design of the watch. There was perhaps a hint of protesting too much, which did not disguise the fact that many of the executives are new, as is the scope of the Fiftysix watch project and the reason behind it. Fiftysix is, in fact, an important transformational milestone for the company, whether Vacheron Constantin execs want to admit it or not.

The trouble is younger buyers continue to favor sporty models over formal dress watches, making traditional a much less positive adjective for watchmakers. With some of Vacheron Constantin’s most recognizable designs tied to the shrinking dress-watch category, one can imagine the pressure in company product meetings to find a model that’ll stem the demographic tide. Enter the Fiftysix.

“We realized we didn’t have a classic, elegant round watch that could be worn every day,” explains Laurent Perves, Vacheron Constantin’s chief marketing officer and a key member of the company’s product development team. “Such a watch should correspond to a modern lifestyle where you wear your watch during the week but also with your jeans when you go out for a drink.”

Both Perves and Vacheron CEO Louis Ferla represent a new generation of management at Vacheron Costantin, one that is increasingly corporatized (like many of the brands controlled by ownership groups like Richemont). In contrast to the period of former artistic director Christian Selmoni, who now heads up the heritage department, product-development committees are large entities with input from a variety of trained experts. And while a large amount of market analysis undoubtedly went into the creation of Fiftysix, the company took an atypical look inward.

“We asked ourselves which period in history fitted the objectives of the watch,” explains Perves. “As we looked in the archives with Christian and the team, we thought the ’50s seemed to be a good match because they were a golden age for Vacheron. Our bicentennial was in 1955. It was a very creative period with the rise of automatic movements and Luminova.”

The designers found a starting place in Reference 6073 from 1956. It’s a relatively straightforward round design, which like many Vacheron Constantins of the era possessed flamboyantly designed lugs. In this case, the tips of the company’s Maltese Cross angled inward to hold the strap. The designers then shifted to both the 1940s and the 1960s to extract two-tone dials from watches of that period.

That said, Fiftysix is not a vintage-​inspired collection or even a vintage-​inspired mash-up. The Maltese Cross from the 6073 has been ghosted away to little more than a line, and the sector dial and numerals, while vintage in shape, are colored and finished in modern fashion. If you look closely, a subtle box crystal—a vintage detail that is once again popular in watches—can be detected. In other respects, Fiftysix is a very modern collection, rounded where it counts for comfort and sized at 40 and 41 mm to fit a wider variety of customers.

In fact, approachability may be the most sterling quality of Fiftysix. The designers have scrupulously avoided dramatic touches that could narrow its appeal. It is also adapted to a wide variety of complications and priced aggressively for the brand. The rose-gold Fiftysix Tourbillon with peripheral rotor is just $113,000, one of the brand’s lowest prices to date for such a complication. Vacheron has been able to offer a self-winding model in steel for less than $12,000 through the use of a supplied movement without the Geneva Seal hallmark.

Each model has an excellence of finish on case, movement, and dial, which is probably the most important thing people expect from Vacheron Constantin. As is customary for the brand, movement finish quality increases with the level of complication, but the simpler models will not suffer in comparison unless it is made with a loupe. The brand has created a sense of contemporary classicism, particularly with the complete calendar model, with its perfectly proportioned display windows that evoke so many great watches of the 1950s.

“We wanted to find something that would exist in between our Patrimony and Overseas [sports] lines,” says style and heritage director Christian Selmoni. “It’s a kind of relaxed way to wear a watch, which is not something so easy to design. I think for many watch owners, fans, and collectors, this watch was unexpected.”

But as he took off for another event, Selmoni left an unintended counterpoint to the Fiftysix by pulling out of his bag another Vacheron Constantin calendar watch—this one from the 1950s. It had a silvered dial and white-gold case with a set of gadroons, or decorations, around its outer edge and flamboyant reverse-teardrop lugs. It had the streamlined flair typical of the great industrial designer Raymond Loewy. True, it wasn’t something most men would wear on the weekends or out for a drink, but it was art.