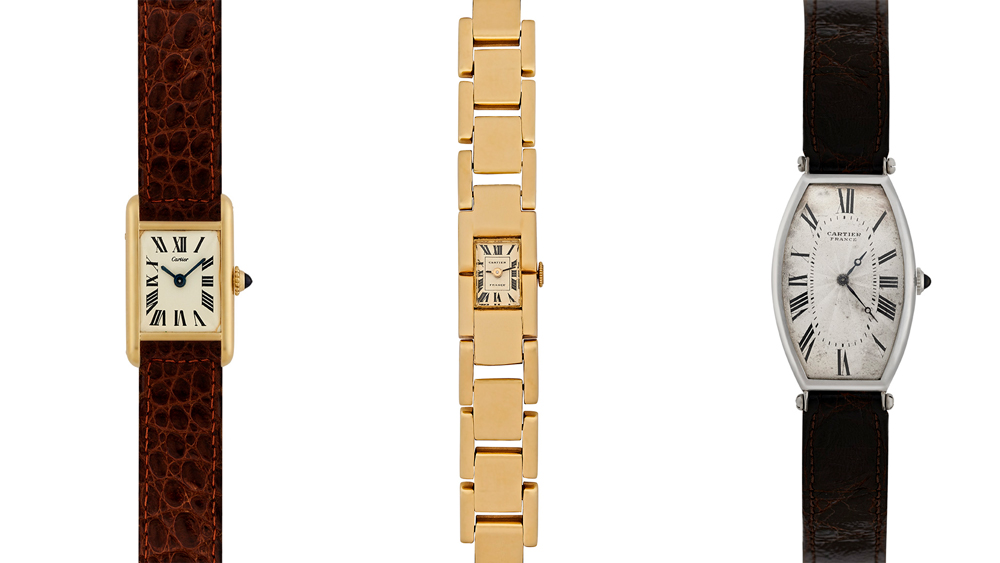 Of all the icons of 20th-century watchmaking history, the Cartier Tank is the oldest, and, arguably, the most influential. Designed by Louis Cartier in 1917 to recall the Renault FT-17 tank used in World War I, the wristwatch, which went on sale two years later, was a radical departure from the pocket watches that ruled the day.

Modern production of the Tank likely figures in the hundreds of thousands. Until 1960, however, Cartier only produced about 2,200 models, making vintage Tanks extremely rare and highly sought after.

The rectangular—or occasionally square—model was so well-received that Cartier quickly spun off a number of variations, including the curved Tank Cintrée in 1921 and the more rounded Tank Louis Cartier in 1922.

The pieces on display at Dover Street Market range from about $13,500 for a simple ladies’ style to slightly over $100,000 for one of the rarest pieces in the collection, a 1990 Cartier Crash, originally designed in 1967 by London-based Jean-Jacques Cartier after he witnessed a car accident and wondered what a Cartier Tank would look like “completely mangled,” Fane says.

Fane attributes the model’s enduring appeal to its inherent simplicity.

“Look down on the Tank from above and what you see are two big symmetrical thick tracks on either side—the basic form of the watch,” he says. “In this world of excess, the simplicity of the design has proved to be lasting. There were no gimmicks. No excessive decoration. It was just something very simple and very elegant.”

The Los Angeles outpost will be the fourth Dover Street Market location to host a Fane-curated Cartier watch exhibition.

“The juxtaposition between the cutting-edge fashion and these extremely elegant old watches—wow, these old watches really hold their own in this environment,” Fane says. “I could do this in a more traditional area, but I like my association with Dover Street. It keeps me young and permanently astonished.

“There is a romance to owning these watches,” Fane concludes. “Muhammad Ali, Katherine Hepburn, Duke Ellington, Jackie Onassis, Andy Warhol had these watches. When you have one, you are buying into that history.”