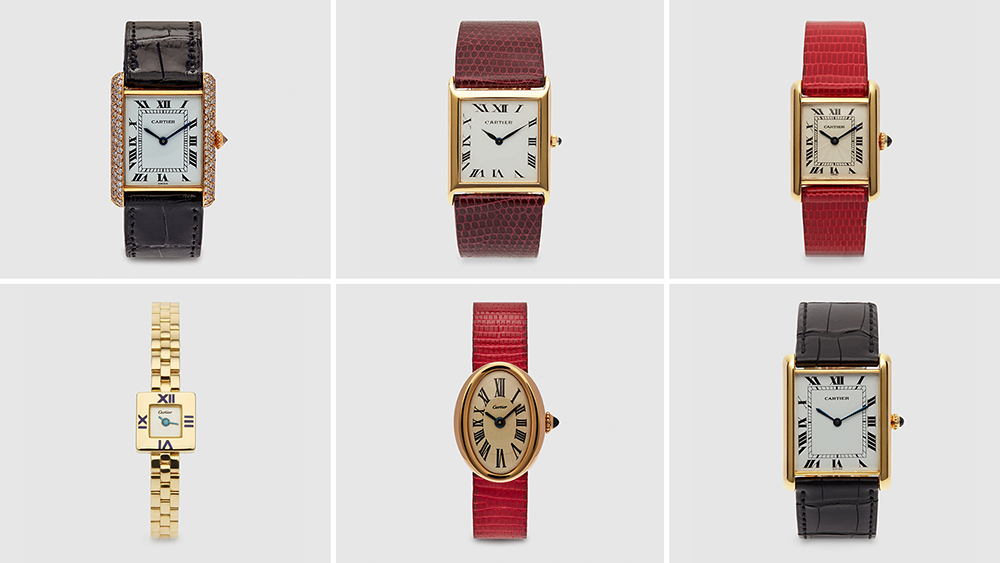 Is there such a thing as too many Cartier timepieces? Dover Street Market doesn’t think so. After holding an exhibition of vintage Tank watches at its Los Angeles outpost last year, the high-end retailer is offering a haul of collectible Cartier wrist candy via its online store.

Harry Fane, the London-based gallerist considered the world’s foremost expert on Cartier, has again curated the retro rarities. This time, however, there are only six statement watches rather than 36, making them even more elusive.

The half dozen set comprises both men’s and women’s styles from the ‘60s, ‘70s and ‘80s. The standout is a Diamond Tank wristwatch from 1980 that’s priced at approximately $17,950 (£12,840). For the unversed, the Cartier Tank is the oldest, and, arguably, the most influential timepiece of 20th-century horology. It’s been donned by legendary cultural figures ranging from Muhammad Ali and Katherine Hepburn to Jackie Onassis and Andy Warhol.

This particular example is characterized by an 18k yellow gold case that features elegantly rounded corners and sparkling stones. Cartier began incorporating gems into its gentleman’s watches in the late ‘60s and this timepiece is even equipped with a diamond winder. The striking 23.6 mm dial is fitted to a dark brown crocodile-embossed leather strap.

Another highlight is a Tank Automatique from 1975, which will set you back about $26,000 (£18,600). Also known as the Tank Jumbo, this timepiece was first introduced in 1974 and made in limited quantities throughout the ‘70s. It was the first Tank to sport an automatic movement, which explains the bump on the back of the case that houses the watch’s inner workings.

Staying in the same decade is a Baignoire wristwatch from 1972 that’s priced at $17,950 (£12,840). A clear outlier, it is the only one of the selection to feature the oval-shaped face synonymous with Cartier’s Baignoire series, which launched in 1956. Made by Cartier London, it sports a 19 mm case crafted from 18 kt yellow gold, along with the brand’s trademark blued Èpée hands and a beaded winder with a sapphire cabochon.