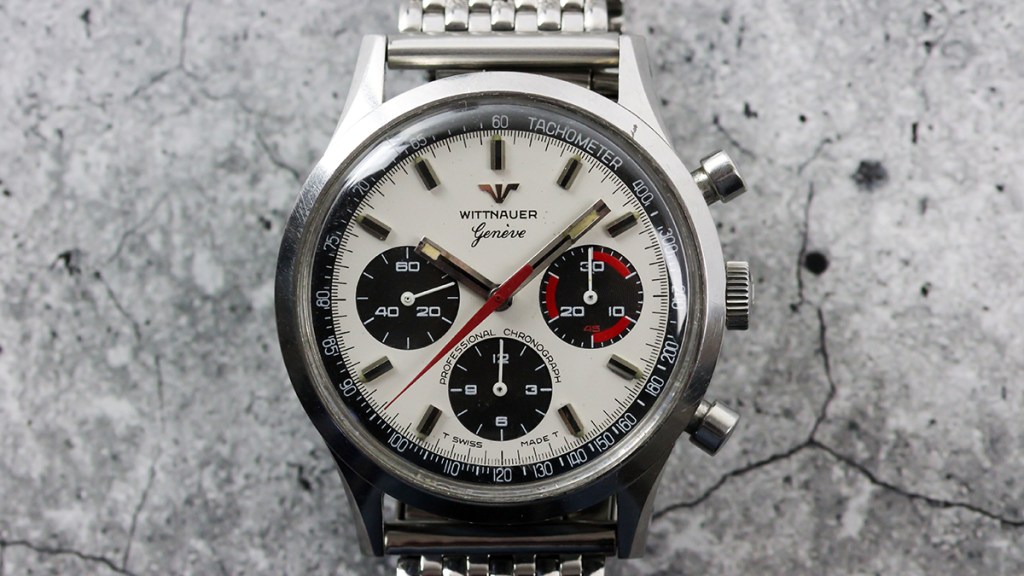 Vintage chronographs are continuing to see a significant increase in value as we creep toward another round of auction sales in 2017. With the Rolex Daytona at the top of the pyramid and vintage Heuer chronographs trailing not far behind, collectors are turning their eyes toward the next big thing. Over the next few weeks, we’ll be taking a look at different brands on the rise and selecting a handful of unique and exceptional examples available for sale.

This week, we’ve chosen Wittnauer. Originally the distributor for Longines based out of New York, they were bought out by Longines in the ’50s, triggering a successful line of chronographs, alarm watches, and the like before succumbing to the quartz crisis. The ’60s and ’70s yielded a great number of desirable pieces from the firm, including the four references we describe below.

Of our selections this week, the 242T is truly the brand’s one real “claim to fame.” Prior to the Omega Speedmaster’s adventure in outer space, Wittnauer Professional Chronographs were used by NASA with relative frequency. The 242T—powered by a hand-winding Valjoux 72 movement—was actually tested as an option for the Apollo missions. Of course, eventually, that honor was bestowed upon Omega.

This example of a rare Paul Newman–esque “Panda dial” configuration is in very fine condition—a slight justification of its slightly steep $8,500 asking price. As always, we’d recommend employing your best negotiation skills on this one.

With a black dial of slight similarity to the Omega Speedmaster Mkii “racing dial”—cased in a chunky 42mm diver’s-style case with a roulette wheel bezel—this 246T chronograph is the epitome of the weird and wild creations of the 1970s. Safely the most pristine piece on our list, this chronograph, with its bezel fully intact, is rare—bezels made from enamel or Bakelite frequently end up cracked or destroyed over the course of their lifetimes.

Though the 242T tells the best story, this 7004A Professional Chronograph is easily the most identifiable Wittnauer out there—not to mention the one where similarities between Wittnauer and Longines are easiest to spot. Longines had a very similar model in its catalog in the late ’60s as well, and it even created a reissue model of the piece in 2015. Unlike its siblings, the 7004A is powered by a Landeron Calibre 248 manually wound chronograph movement, and it measures a very reasonable 38mm in diameter. It’s not the most pristine example we’ve ever seen (though we’ve seen much worse), and its pricing ($3,200) is commensurate to this.

We suspect that this late addition to our list (yes, a second 242T) is a much earlier example of the 242T Professional Chronograph, given the more utilitarian font choice and downright confounding 100-increment scale replacing a conventional 60-minute track. This decimal track was primarily used by efficiency engineers for tracking productivity (percentage of an hour taken to accomplish certain tasks, etc). Its this kind of obscurity that will continue to drive up its value in the long-run.