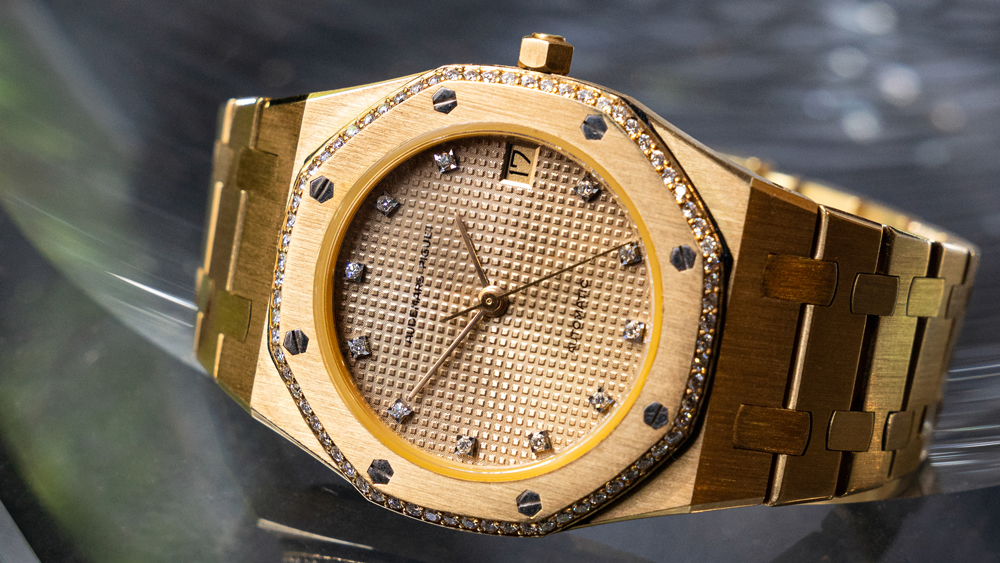 In the market for a retro-fabulous 1970s gem-set gold watch made by one of Switzerland’s most storied firms? Material Good, a watch and jewelry retailer with a chic second-floor showroom in Manhattan’s SoHo neighborhood, recently acquired an unusual and highly collectible vintage Audemars Piguet Royal Oak on a yellow gold bracelet that has Studio 54 written all over it.

“It’s such an interesting timepiece,” says Yoni Ben-Yehuda, head of business development for the store, an authorized retailer for Audemars Piguet.

Purchased from a collector, the c. 1979 18-karat yellow gold automatic model comes in a 35 mm yellow gold case accented with diamonds. It offers a very early example of diamond-setting on the Royal Oak, which the brand began in 1977, according to Michael Friedman, head of complications at AP.

“It has 10 small diamonds on the hour markers and a factory-set diamond on the bezel,” Ben-Yehuda says. “The thing I love most about this piece is how avant-garde and uniquely odd it is. It has a wonderfully patinaed yellow gold with this bezel that’s the design language of Audemars Piguet, but also this early gem-set experimentation when they were still finding the voice and tone of gem-setting Royal Oaks.”

On sale for $22,000, the piece was probably designed as a men’s model—“The Royal Oak was a little more industrial in its design language,” says Ben-Yehuda—but given its size and diamond detailing, it feels more feminine today.

“The other thing: The tone-on-tone makes it look like jewelry,” he adds. “It has this beautiful yellow on yellow. And the dial is patinaed really lovely and it’s so warm. Sometimes yellow gold can read very bright, but yellow gold that’s 30 years old has a sweet patina to it.”

Ben-Yehuda emphasized the diamonds on the Royal Oak were factory-set, as opposed to placed on the watch by an after-market seller. “It’s a moment in the history of not only AP but also of gem-setting watches,” he says.

“If you want a shiny new yellow gold watch, this is not the piece for you,” Ben-Yehuda concludes. “It’s for someone who wants something with a little bit more character.”