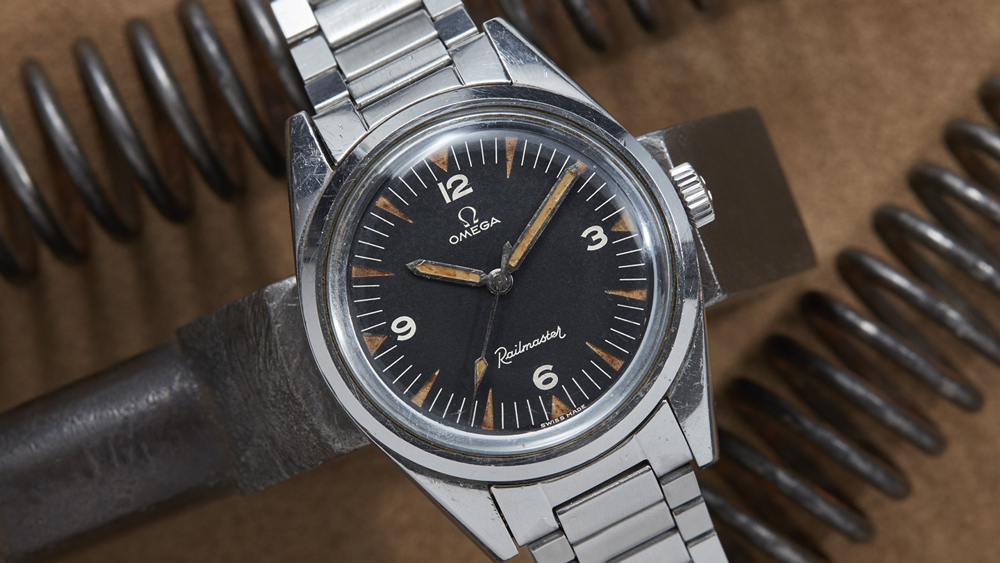 It’s been a bumper year for Omega thus far, thanks to the arrival of several new Speedmaster models—all launched to celebrate the iconic watch’s 60th anniversary—as well as the reissue of the Railmaster. With this added attention to the brand, Omega’s vintage pieces are seeing further increases in value, making them prime candidates for this week’s Vintage Finds segment.

To narrow the pack, we’ve decided to focus on three vintage Omegas that have now been reissued in varying forms: the Railmaster, the “Big Blue” we covered previously, and, of course, the Speedmaster. Though we had no luck finding an original Speedy from 1957 this week, the lovely pre-moon example we tracked down will certainly satisfy any discerning collector.

Though reissued in name this past spring, Omega’s latest iteration doesn’t particularly resemble this chunky diver chronograph from 1972. The Big Blue was one of the first chronographs capable of handling a 120M dive, and given its rough-and-tumble nature, finding an example as pristine as this one from Piretti Watches in Bologna can be quite the challenge. Its crystal and dial appear effectively mint, with faint and even aging present on its indices and hands. We aren’t 100 percent certain that its mesh bracelet is original to the piece, but that shouldn’t impact its sale price significantly given its condition.

Though it launched the same year as the Speedmaster, the Railmaster never garnered nearly as much attention as its moon-bound brother. Much like the Rolex Milgauss, the Railmaster was specifically designed for railway employs, though it also found favor with engineers and scientists whose daily tasks involved significant exposure to magnetic fields. This particular example has seen some wear and tear over its 60-year lifespan, though not in a way that detracts from its vintage charm. At 38mm across, it’s a solid vintage candidate for daily wear, as well.

Your average run-of-the-mill Speedmaster can be easily tracked down for a few grand on any given day, though earlier references like this pre-moon 145.012—the same reference worn on the surface of the moon by Buzz Aldrin himself—are becoming harder and harder to come by. This example, complete with a flat-link bracelet, is a solid example of the ultimate icon from Omega. Keep this bad boy from dropping to the floor or being run over by a truck, and it’s unlikely you’ll ever lose a cent on it.