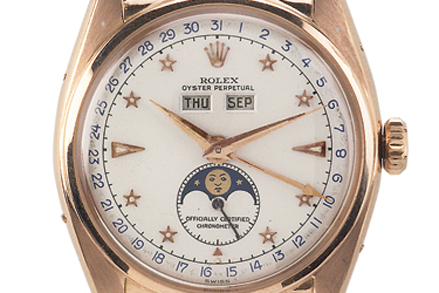 Davide Blei, an Italian business executive who has collected more than 100 rare and important Rolex timepieces from the 1940-1980s, is putting his collection on the auction block March 22 at the Grand Hotel in Milan with simultaneous bidding online. Organized by the Geneva-based auction company Patrizzi and Co., the sale will offer 114 watches that were acquired for their aesthetics rather than complications, says Blei, who focused on intricate dials and cases. Highlights from the sale include a 1951 pink gold Stelline chronometer, estimated between $190,000 and $255,000, and a 1970 Paul Newman Cosmograph Daytona, featuring the red Daytona logo and round-button chronograph, registers, and black bezel, estimated from $50,000 to $75,000. The watches will be on display at Patrizzi’s New York showrooms March 5-7. (www.patrizziauction.com)