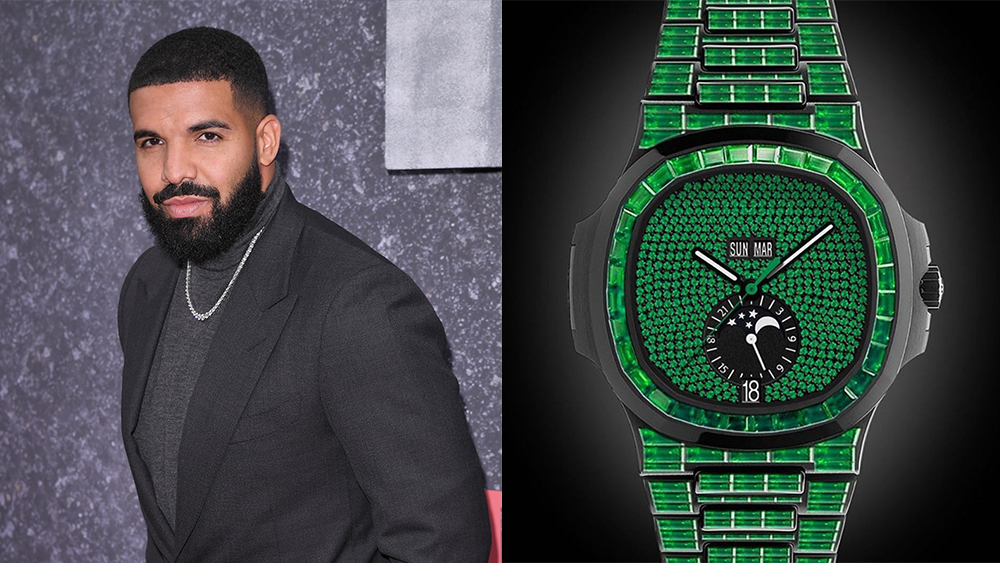 Namechecking luxury brands is nothing new in hip hop, but it’s not often you get to see the actual piece referenced in a rap song. On Friday morning, Drake changed all that.

Mere hours after dropping a new new song collaboration (and accompanying video) with Future titled “Life Is Good,” the rapper took to Instagram to show off the custom Patek Philippe Nautilus featured in its lyrics on three different occasions. And this is no ordinary Nautilus—in fact, owning one at all is considered extraordinary due to the model’s massive waitlists. Drake’s version, Ref. 5726, has an even more exclusive pedigree: It just so happened to be customized by Off-White founder and Louis Vuitton Menswear Director Virgil Abloh.

Covered in what we can only assume to be hundreds of faceted emeralds, it is a mesmerizing symphony in green. What’s so unusual is not its customization––the practice is common enough in circles with the right kind of bank account––but this particular custom job largely obscures Patek’s design and, more surprisingly, its logo. In fact, the maker’s name itself is no longer visible at all. Unlike some other brands which embrace alterations (Tag Heuer, Bulgari and Zenith allow Bamford Watch Department to alter their timepieces), Patek Philippe has always drawn a hard line against this kind of radical change.

Designed by Gérald Genta, the Nautilus has been a modern classic since its introduction in 1976, a sports watch made distinct by its horizontally embossed dial––something entirely covered up in Drake’s edition by round-cut gems––and a case with groundbreaking porthole construction. The very hallmarks of style that helped reinvigorate high-end Swiss watches during an influx of battery-powered models are no longer recognizable.

Whatever purists may think, Drake is no stranger to extravagant Nautiluses. While attending a Toronto Raptor’s game, the rapper was seen sporting a rare rose gold iteration encrusted with over 1,000 diamonds which cost a staggering $600,000.

One thing is sure: These two Pateks will make quite the twinkling duo in his collection. Life is good, indeed.