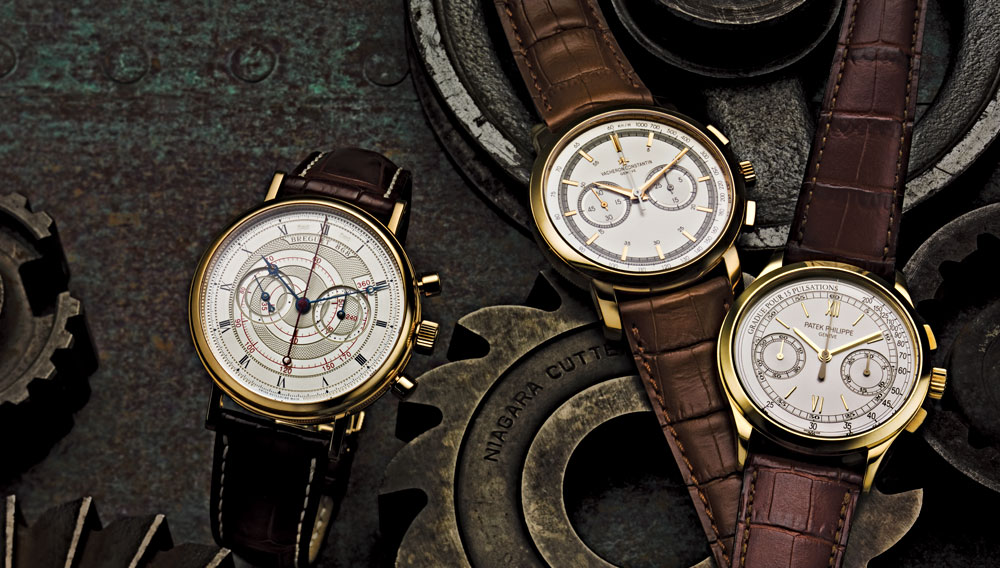 A shoal of herring may be an apt metaphor for Swiss watch companies, which can turn their designs on a dime in unison at a sign of an approaching threat. Thus, when the financial crisis of 2008 struck, wheels were set in motion in product development offices across Switzerland, and the results are seen in this year’s new watches. Lovers of vintage timepieces may wish to thank the fallen potentates of subprime derivatives for the sudden return of fondly remembered mid-20th-century watch styles, no more perfectly illustrated than by the recent blooming of classic, two- register chronographs, the look with which this complication came of age.

“Pocket watch chronographs were often configured with registers at twelve and six o’clock,” says Paul Boutros, a collector with a particular interest in vintage watches, including period chronographs. “The early wristwatch chronographs had their registers at three and nine o’clock, which gives them a simple, elegant balance. The look is timeless.” Auctioneer Geoffroy Ader of Sotheby’s is even more specific. “The first wristwatch chronograph we know of is a split-seconds model made by Patek Philippe in 1923,” he says. “It was very influential and achieved a record price when it was sold in 1999.”

s chronographs entered larger production in the following years, suppliers such as Valjoux and later Lemania sold movements to a variety of companies. The layout of these movements, which dictated the position of the registers, typified the signature look of these early chronographs. By the late 1940s, more modern designs in three-register configurations began to appear. Nevertheless, the original design, which had established the wristwatch as a professional instrument and had been adapted to military service in World War II, had already acquired a certain romantic quality.

That quality may be the most valuable commodity in modern watchmaking. In the most recent batch

of vintage-styled chronographs, many have been designed to capture that romance, regardless of the modernity of their innards. The latest iteration of Chopard’s Chrono One, for instance, contains an ultramodern vertical clutch movement. The third register has been subtly obscured to produce a vintage look. In a similar vein, the modular system employed by Audemars Piguet can easily be configured to produce almost any look desired by the designers. Both it and the Chopard model are self-winding, a feature that was not applied to chronographs until years after the classic period.

ome of the most collectible models, like the Breguet Classique Chronograph and Vacheron Constantin’s Patrimony Traditionnelle Chronograph, still employ the Lemania 2310 (now made by Montres Breguet), a manual-wind, lateral-clutch movement with direct ties to the vintage era. This movement, until recently, also was modified for use in Patek Philippe chronographs.

Patek Philippe is the latest company to release a similarly designed new movement, which, despite several improvements, essentially captures the spirit and architecture of the original era. Montblanc’s Villeret facility and Roger Dubuis (with the addition of a self-winding microrotor) also have released movements with the same flowing architecture that pays tribute to a past period that mechanical watch enthusiasts undoubtedly will continue to revisit for the foreseeable future.