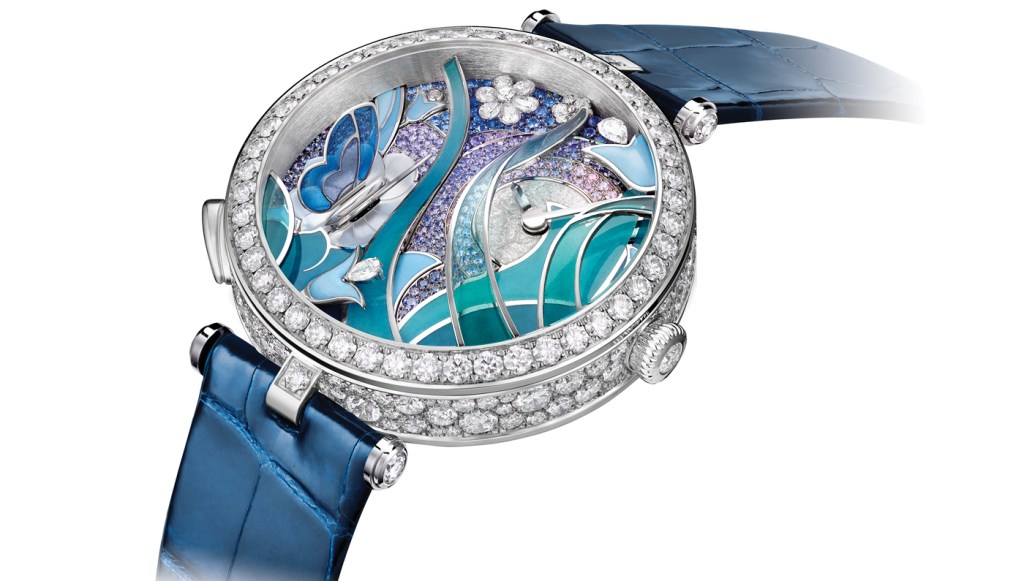 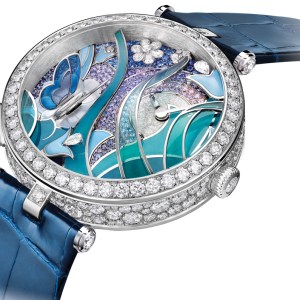 The new limited-production Van Cleef & Arpels Lady Arpels Papillon Automate ($290,000, vancleefarpels.com) reflects the personality of its owner in a very physical way: The translucent wings of a butterfly automaton on the watch’s jeweled and enameled dial beat according to the wearer’s activity level. “Our intent was to make nature come alive, and the butterfly was an obvious option,” says Raphaël Mingam, the brand’s timepiece marketing director. “The idea of trying to mirror the movement of nature with a butterfly that is actually moving came later in the process.” At the press of a pusher on the case, the gold-and-enamel butterfly beats its wings, but even without manual activation, the wings flutter seemingly at random every 2 to 4 minutes—even when the watch is immobile—as governed by a 19-sided sequence wheel. The wings flutter more when the watch is being worn. The automaton mechanism links to the watch’s automatic winding system in two ways: A high rate of energy transference from the winding rotor, which is powered by both the winding mechanism and the wearer’s natural arm movements, results in more activity from the automaton; and the amount of power in the mainspring controls the number of times the wings flap. So the more active the wearer of the watch is, the more her butterfly will be too.

The Lady Arpels Papillon Automate’s mechanism is all the more impressive because it was developed entirely using the internal resources of Van Cleef & Arpels’ parent company, Richemont. Likewise, the dial, which features elements of curved plique-à-jour enamel, is made completely in-house.