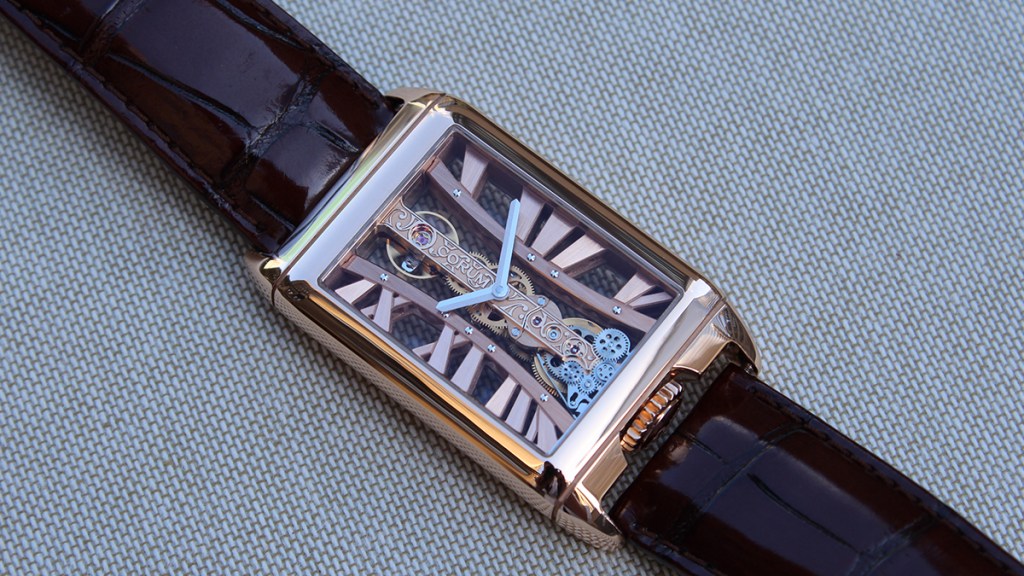 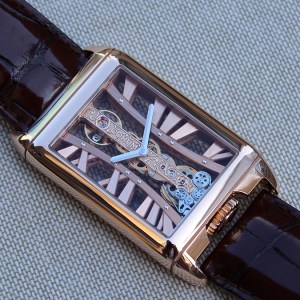 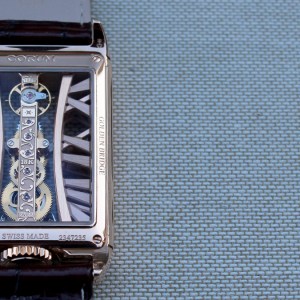 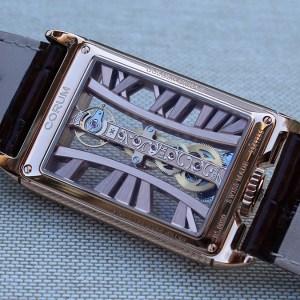 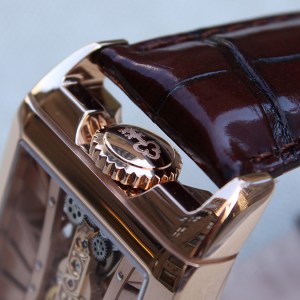 Corum’s Golden Bridge collection has been around the block a few times now, receiving an initial refresh in 2016 with the Golden Bridge Round. New for 2017, Corum has swung the pendulum in the opposite direction to offer the elegant movement in a modestly sized rectangular case—the Corum Golden Bridge Rectangle.

Our first meeting of the new release proved promising, drawing instant (and positive) parallels to the wearing comfort of Jaeger-LeCoultre’s Reverso. Built of rose gold from stem to stern, the GB Rectangle is by no means subtle, but would its sheen wear off after a week on the wrist?

Corum remains one of the few brands in the industry which isn’t afraid to be playful with design (remember the Corum Bubble?), and the Golden Bridge Rectangle is no exception. Filling the void along either side of its movement, Corum’s renowned designer Dino Modolo loosely interpreted the ironwork of the only other iconic Golden Bridge—that’s right, the Golden Gate Bridge. The 18 carat gold structures take the form of abstract roman numerals featuring a brushed finish and pronounced chamfers.

As noted above, the short-lugged rectangular case is reminiscent of the Reverso in a big way, though not in a way that compromises the GB Rectangle’s credibility. The proportions of its case are just right, making them the perfect pairing to the linear nature of its exposed movement. It is paired with a very supple brown alligator trap and tri-folding deployant clasp—also in rose gold. With the crown at 6 o’clock, winding the manually-wound caliber is an easy task that does not require taking the piece off one’s wrist.

Visually the Golden Bridge has seen a reasonable amount of change over the years, though its CO 113 hand-wound caliber remains relatively unchanged since its inception in 1980. Originally conceived around 1975 by the self-taught watchmaker Vincent Calabrese (whose design was acquired by Corum in 1977), the caliber beats away at a frequency of 4 Hz, and has a moderate power reserve of 40 hours.

Unlike many other options out there, pairing the Golden Bridge Rectangle can be tricky. Dress too casually and you’ll find yourself feeling a little too Miami Vice. Any shade of blue suiting will be your best bet hands down, though if you’re feeling more adventurous the earthy tones of Ermenegildo Zegna’s Latest Runway Show would also fit the bill. If you’ve got a getaway on the horizon, the hardware and python leather of this Frank Clegg weekender bag would also provide a fair match, though you’ll also want to tailor the rest of your weekend attire accordingly.

Priced at $36,900, the new Golden Bridge Rectangle models have started arriving in authorized Corum retailers throughout the country.