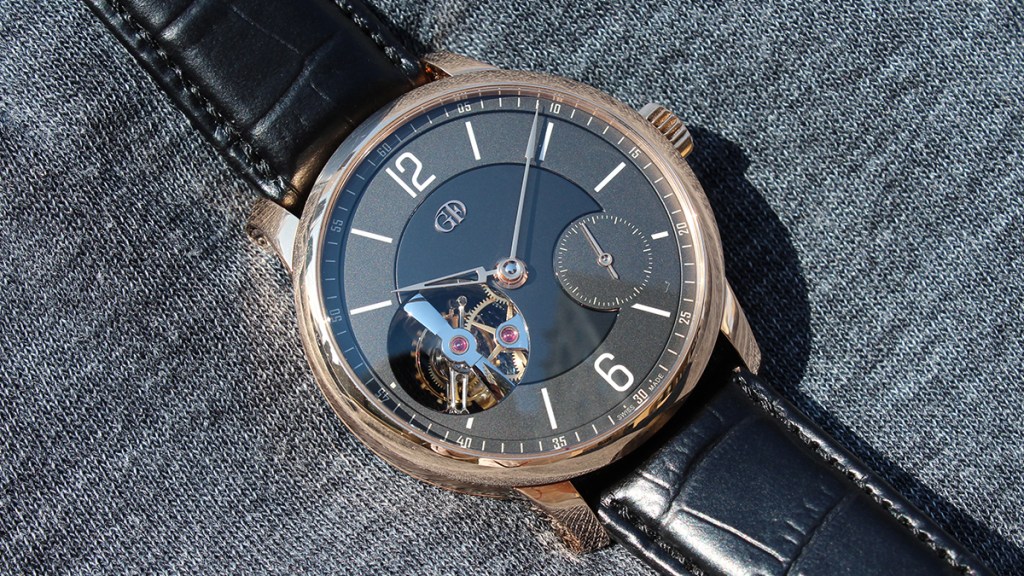 If you really know watches, you by now know the name Greubel Forsey. Their complex creations have garnered international acclaim over the years—including recognition in our 2017 Best of the Best awards for their Grande Sonnerie—and Robert Greubel and Stephen Forsey continue to push the boundaries of modern watchmaking every step of the way.

The Tourbillon 24 Secondes Vision ($325,000) originally launched in 2015, winning the coveted Aiguille D’Or at the Grand Prix D’Horlogerie de Genève, and has since been issued in a handful of different dial and casing combinations. Erring on the subtler end of the spectrum, it is one of the most understated and daily-wear friendly of the brand’s growing line, and we couldn’t wait for the opportunity to take a closer look.

Though simple and elegant in its execution, this is still a piece that will stop someone in their tracks. The crisp three-piece gold dial finished in anthracite shifts from monochromatic to significantly contrasting depending on how the light strikes it, and of course the mix of polished and brushed finishing of its 5N red gold case is second to none. The launch of the Tourbillon 24 Secondes Vision was Greubel Forsey’s first step to a more approachable case size, and at 43.5mm in diameter and 13.65mm thick, it wears quite comfortably.

On their own, these traits are enough to get our attention. However, this is Greubel Forsey and there’s still the matter of the significant tourbillon resting prominently at nine o’clock. In a market where an exposed tourbillon has become almost pedestrian, the duo consistently manages to create some of the most visually enticing tourbillons on the market. The level of expert hand-finishing throughout the movement—visible via a sapphire exhibition caseback—is beyond compare, and what’s more, each bridge is discreetly signed by the movement finisher who completed it.

Design DNA and finishing capabilities aside, what you’re buying with a $325k Greubel Forsey is a jaw-dropping movement. Entirely conceived and produced in-house, the Tourbillon 24 Secondes Vision—a name that references its fast-moving tourbillon that completes one full rotation in 24 seconds—is powered by a manually wound movement good for a 72-hour power reserve (which is indicated on the movement’s back). While you’re checking the reserve, don’t be surprised if you find yourself distracted by one of the Vision’s other unique characteristics.

When Greubel Forsey set out to build this piece, they did so with two conflicting goals in mind. On one hand, the goal was to create a watch that’s smaller and thinner than their past creations. On the other, they wanted to showcase their technical prowess, allowing clear visibility of its 25-degree inclined tourbillon. And that requires space. Their solution—simple as it sounds—came in the form of the small sapphire dome on its caseback. This allows the case to maintain a slimmer profile, as well as allows for additional light to shine in below the tourbillon while wearing the watch. I’ll admit I had concerns about comfort at first, but the location and size of the dome made it barely (if at all) noticeable even after hours of wear.

Subtle as it is in some respects, the Tourbillon 24 Secondes Vision is a statement watch (especially in red gold), and needs to be paired accordingly. For the best impact, we’d suggest taking a dressier approach with an evening jacket by Kiton or one of these subtle Italian blazer options, and incorporating other equally eye-catching accessories to pull it all together. Among other things, this collection of statement shoes, and these new sunglasses from Blake Kuwahara would complement the Greubel Forsey perfectly.

The 5N red gold Tourbillon 24 Secondes Vision, as well as the new blue and chocolate versions in Platinum that launched earlier this year, are available now through Greubel Forsey authorized retailers—though they won’t be easy to come by. With an annual production capacity of roughly 100 pieces for the global market, their timepieces remain scarce, only adding to their significant collectability.

Follow @RobbReportWatchCollector for images and updates from the world of watchmaking.