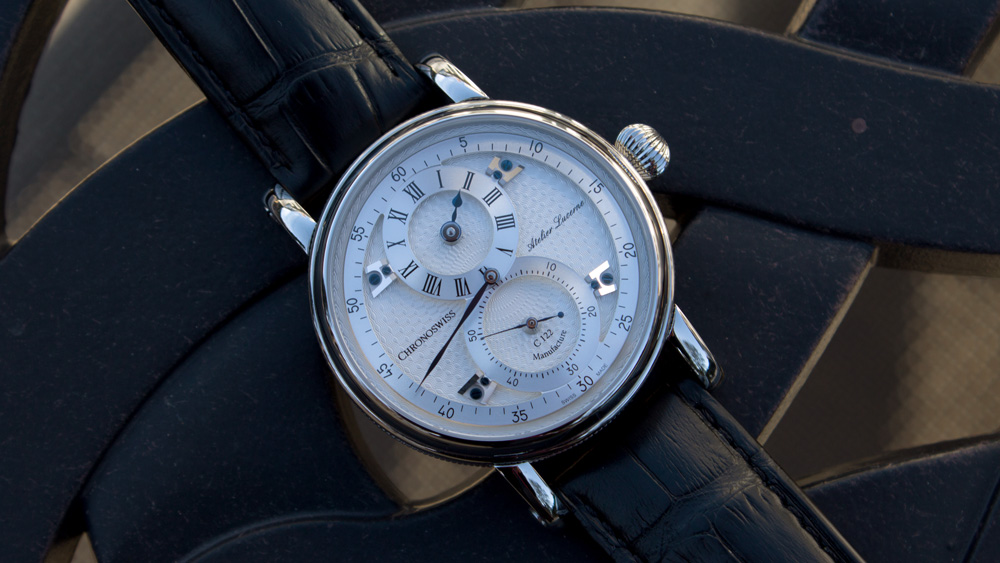 There was a time—a few years ago—when you couldn’t have a conversation with watch enthusiasts without hearing the name Chronoswiss. But more recently, the brand has sadly faded into the background. In 2012, Chronoswiss found new ownership at the hands of Oliver Ebstein and his wife, Eva. Their first mission was to reunify the brand’s manufacturing—previously split between Biel, Munich, and two facilities in Lucerne—by bringing it all back into the heart of Lucerne in order to streamline processes. Since then, the brand has been working at updating the brand’s aesthetic codes in a manner that remains true to Gerd-R. Lang’s original vision when he founded the brand in 1983.

Fast-forward to 2017, and the brand has come a long way. The Sirius Flying Regulator Manufacture ($8,190)—originally launched in 2016—is instantly recognizable as Chronoswiss, and its design is packed with an intricate level of detail. Given the opportunity, we couldn’t help but take a closer look at the Red Dot 2017 award-winning model in this week’s Watch of the Week feature.

The aesthetic execution of the Flying Regulator is hands-down the most interesting and thoughtful execution we’ve seen from the brand in ages (if not ever). Its knurled-edge case and onion crown are direct descendants of past models, though even there we see a certain level of refinement. Rather than a full coin-edge bezel, only a faint detail appears below the polished bezel as well as on the edge of the caseback.

On its dial, it’s easy to see why the name “flying regulator” was chosen. At its base level, machine guilloche is applied to the main dial layer upon which the manufacture’s name, Atelier Lucerne, and “C122 Manufacture” are stamped (more on this caliber denotation later). Raised a number of millimeters above the main dial, a pair of subdials appear to float and are supported by small, architecturally structured bridges. They display both running hours and seconds, while a central regulator hand displays running minutes. In this particular configuration, a light silver was used for its dials, which is complemented by blued hands and screws.

For those more acquainted with the long history of the brand, the dial configuration of the Flying Regulator is of course familiar. The manufacture caliber C122 beating at its heart is the same that has been used by the brand since it unveiled the first self-winding variants of the Régulateur in the early ’90s. Based on the Enicar Caliber 165, Gerd R. Lang stockpiled a number of these calibers back in the early days of Chronoswiss, and it seems that the current direction found enough remaining calibers to finish the Regulator Manufacture.

The 30-jewel caliber is a relatively simple one, operating at 3 Hz and delivering a power reserve of approximately 45 hours. That said, its display configuration is quite unique while still remaining incredibly simple and easy to read. Chronoswiss also offers a fairly similar piece with a jumping-hours indication that is equally legible in its own right. But in terms of design execution, the Regulator Manufacture is easily the champion of the current collection.

Certainly airing on the dressier side of the spectrum, the Regulator Manufacture can seem a little out of place when worn casually if you’re not too careful. This is not a polo-shirt-and-shorts sort of watch, though with a polished, casual look (especially for an evening out), it can be up for the task. If you’re sporting dark denim and a casual crewneck shirt and jacket, the Regulator Manufacture will be right at home. That said, it will also tuck perfectly well under a shirt cuff for days at the office and provide a nice complement to a dark sport coat as you transition from office life to post-work refreshments.

After its recent changes, Chronoswiss has a small handful of stateside retailers; however, shoppers in the U.S. can also order via the brand’s online store.