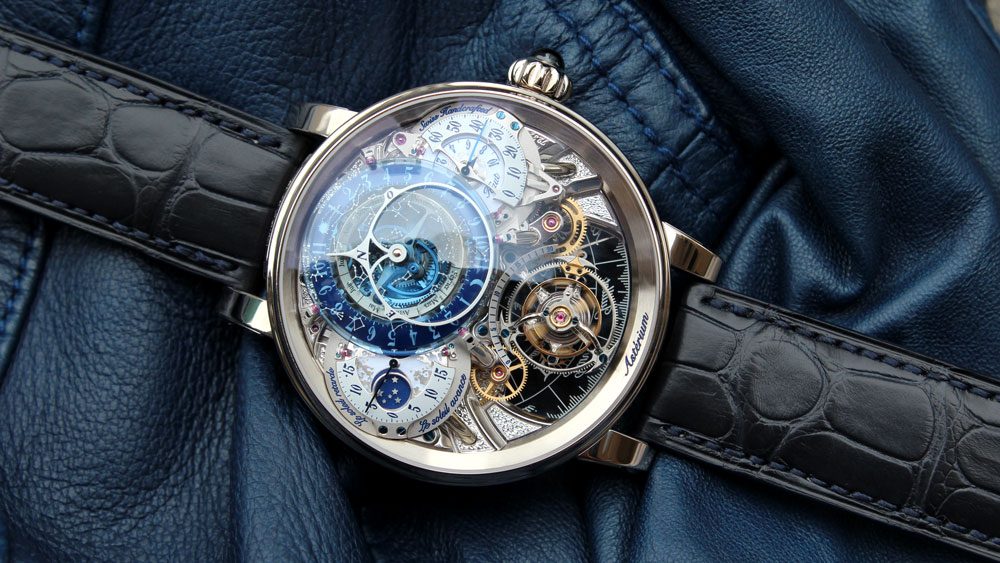 Though a true master of complex watchmaking, Bovet remains a brand that often garners less attention than it should. The brand saw a proper revival in 2001 at the hands of Pascal Raffy, a French pharmaceuticals executive who happened to have a passion for fine watchmaking. From day one, Raffy’s vision was to forge Bovet into an exceptional manufacture, and within a matter of years, all its manufacturing demands were being handled in-house.

Fast-forward to 2017, and we’re presented with yet another magnificent creation: the Récital 20 Astérium. Unlike its sibling—the Shooting Star we covered last November—the Astérium’s complications focus in on our night sky above all else (pardon the pun). This astronomical wonder is one of a few unveilings in 2017 that display sidereal time. (An in-depth explanation can be found here, but it’s a measure of time based on Earth’s orbit in relation to the stars instead of the sun, which yields a 364.25-day year without leap years.) Moreover, it can accurately display the position of constellations on its dial. While anything but practical, this latest Bovet instantly grabbed our attention, and we couldn’t resist a chance at a closer look for this week’s Watch of the Week.

From every angle, the Bovet Récital 20 Astérium will stop you in your tracks. First and foremost is the watch’s translucent blue quartz dome. Laser-engraved with a constellation map and coated in Super-LumiNova, it is flanked by a pair of white enamel subdials with blue indices and hands. From there, the movement progresses downward as if to emulate a pair of grand staircases descending into the entrance of a stately manor. Resting proud at the center of said staircase is the movement’s flying tourbillon, making a rotation every 60 seconds. A series of eight pillars provide support for the varying layers of the caliber as well as add to its visual complexity.

Unlike most Bovet timepieces, the Astérium’s case is a touch more traditional than its siblings, relying on a conventional curved lug design and 3 o’clock crown position. That said, the overall design of the case is still on the unconventional side. The stepped profile of its caliber is mimicked by its case, tapering significantly from top to bottom. Not only does this provide a better viewing angle for its wearer to appreciate its inner workings, but it also makes a cursory glance at the time a touch more effective.

As you may have noticed, there’s a lot going on when you look at both sides of the Récital 20 Astérium. Starting with the main translucent subdial at 12 o’clock, we are presented with not one but three different indications. Its white, circular hand points to the hour indication, displayed digitally on a disc below. The circular element itself shows the visible constellations when the tip of the hand is pointed north. Another disc rotates below the hour disc at a separate rate, and a point at this hour disk (located at the 12) indicates the current month.

To the left, we have a subdial that displays both the current moon phase as well as an Equation of Time indication —see the extensive explanation here—which shows us how much longer or shorter the day is when compared to a solar day (a 365.25-day year). To the right, a much more practical minute indication is present in retrograde, with a power-reserve indication displaying how much of its 10-day reserve remains.

Visible via the once again laser-engraved sapphire caseback of the Astérium, we have a single-handed calendar indication with demarcations for each day, month, astrological sign, equinox, and solstice. From this side, the rear face of its flying tourbillon, the chamfered bridge supporting its mainspring barrel, and the vibrant blue-textured detailing on its mainplate are also exposed.

The Récital 20 Astérium is being produced in a run of 60 pieces by Bovet in either platinum, red gold, or white gold with a starting price of $350,000. Clients can have cases and other details customized by the Bovet manufacture upon request.