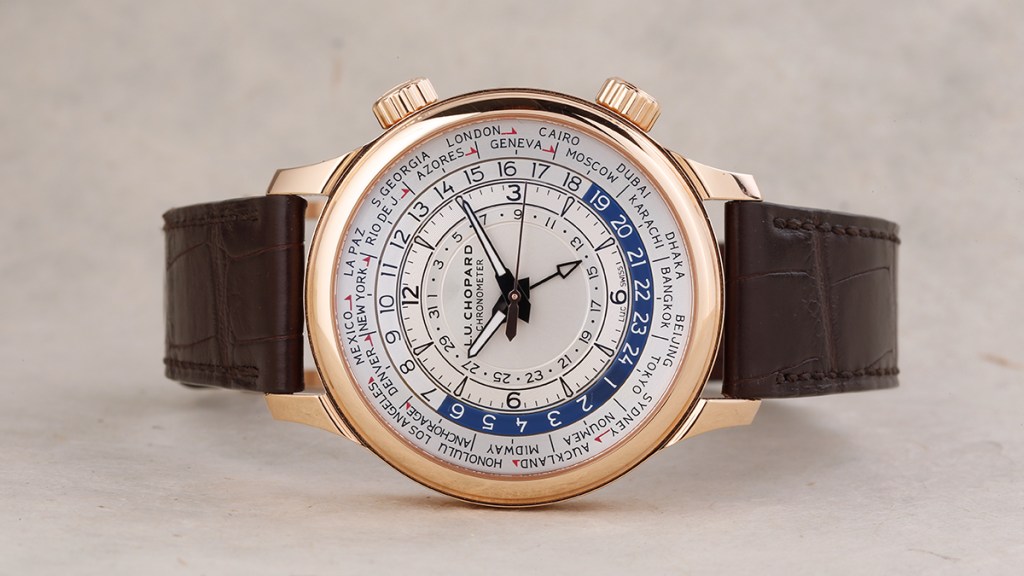 First announcing its plans in late 2016, Chopard has finally added a world-time watch to its repertoire with the unveiling of the Time Traveler One, available in steel, rose gold, and platinum. The new travel-friendly pieces are part of the L.U.C line—named after founder Louis-Ulysse Chopard—which means they are entirely designed and manufactured in-house at Chopard’s facilities in Fleurier.

World-time watches are a particular breed, and unlike chronographs or annual calendars, they exist in somewhat limited numbers. At the top of the food chain, the legendary Patek Philippe world timers boast exquisite enameled or guilloché dials, whereas offerings from Vacheron Constantin and Jaeger-LeCoultre use etched sapphire or lacquer to portray the earth on a two-dimensional plane surrounded by time-zone indications. Girard-Perregaux, Montblanc, and even the more entry-level Frederique Constant also have compelling offerings in the category, leaving us to wonder where in the world-time pecking order the new Time Traveler One would land.

Two specific details on the L.U.C Time Traveler One won us over almost immediately upon its arrival. First of all, its compressor-style case—usually reserved for dive watches with an internal rotating bezel—adds a unique and practical detail to its design, as the second crown is used for quick adjustment of the piece’s home time. As you can see in the image below, the crown at 4 o’clock is marked with a representation of a globe, eliminating confusion during setting.

The Time Traveler One’s dial design, albeit a busy one, also caught our eye. Four separate indication tracks—which include the 24 time-zone cities, a corresponding 24-hour scale, hour and minute indices, and a date indication—all use an array of different finishes that maintain a great level of legibility, especially considering the amount of information the piece provides. This design detail lands the Chopard right in the middle of the pack, with the extremely minimal Girard-Perregaux 1966 WT.TC at one end of the spectrum and the Vacheron Constantin Overseas World Time (which lists all 37 time zones) at the other.

As with other models in the L.U.C collection, the Time Traveler One’s in-house caliber—the L.U.C 01.05L—is COSC-certified and is finished with Geneva stripes throughout (visible via a sapphire display caseback). The self-winding caliber is good for a power reserve of 60 hours, running at a fairly standard 4 Hz (28,800 vibrations per hour).

Thanks to its previously noted dual crown configuration, setting the Time Traveler One is quite painless. The crown at 2 o’clock uses the standard two-position  model for the setting of the date and current time, whereas the crown at 4 adjusts the home city. This configuration is both smart and efficient, not to mention fairly uncommon. Most other brands either use a pusher for unidirectional adjustment or rely on a single crown to control all adjustment.

Even in rose gold paired with a chocolate-brown alligator strap, this new Chopard is hardly difficult to pair. On the casual end of the spectrum, the looks from Zegna and others in our recent “Office Casual” feature would be a good jumping-off point, with pieces centered around shades of denim and brown that would complement the piece flawlessly. If you’re heading for the skies (as one does with a world timer in tow) it would also be a fitting match to the Rucksacks and other luggage from Böle that we featured in our July issue.

Chopard boutiques and retailers are now receiving stock of the Time Traveler One, priced at $13,060 in steel, $22,950 in rose gold, and $35,910 in platinum. That said, Chopard’s annual production of its L.U.C timepieces is roughly 4,500 a year, meaning these world timers could likely be in short supply.