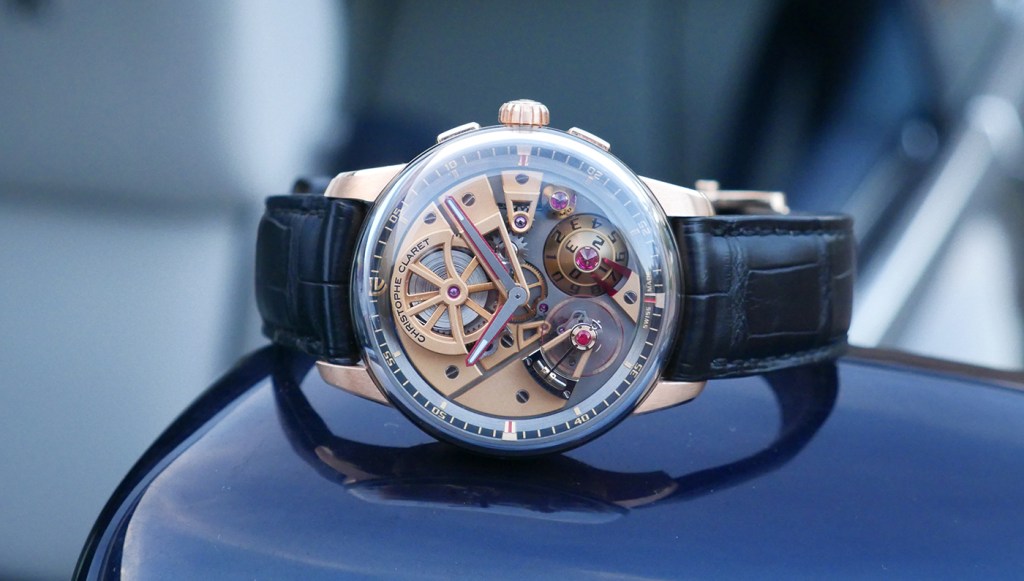 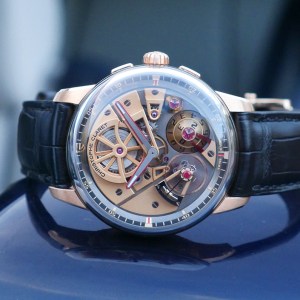 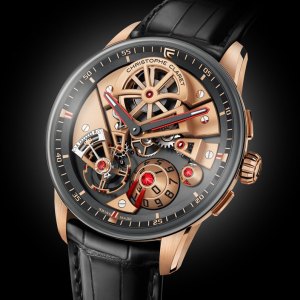 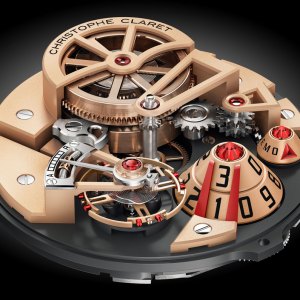 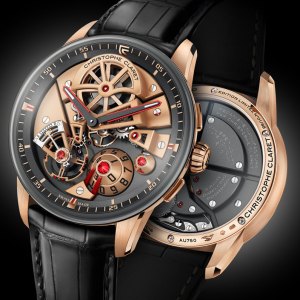 When we first saw the Christophe Claret Maestro’s spec sheets, specifically its 42 mm case and sub-$100,000 price of entry, we were smitten. Available in both titanium and red gold (seen here), the new release follows the trend of top-tier watch brands releasing more approachable models, and as with others in the category, the Maestro is by no means a “dumbed-down version” of anything else from Christophe Claret. The brand has a long legacy of innovative engineering and boundary-pushing design, so there is little surprise there. This new piece stays true to the Claret DNA while hitting a wearability sweet spot that opens the brand up to an even broader collector base. All this, of course, meant that we absolutely had to get a closer look at Maestro when it finally landed stateside.

No matter the angle of approach, there is a lot to take in here. A number of raised bridges—including a cage-like structure that contains its stacked pair of barrels—take up real estate on the upper half of its would-be dial. Down in the southern hemisphere, there is another raised bridge that supports the movement’s balance wheel and power reserve indicator, as well as its date indicator and “memo” function (more on that later). The conical design of the date display is one of the most interesting we have seen in ages, taking a three-dimensional approach to the idea of a big date indicator where both halves of the cone rotate independently to display the current date between a pair of PVD-coated red arms. Turned to its side, you’ll come to realize that roughly half of the Maestro’s thickness is occupied by its crystal. There is no bezel to the piece whatsoever, allowing an unfettered view of the architectural landscape that rests below.

The way Claret presents it, think of the Maestro as a sleek and technologically advanced Post-it Note of sorts. It does not have an alarm, but instead, a smaller cone displays a memo function, where a small natural ruby (or sapphire in the case of the titanium version) is visible when its wearer has set the piece to remind them of a duty or task they need to look after that day. A quick press of the pusher at two o’clock is used to set the memo function to either on or off. Though nowhere near as complex as some of Claret’s other complications, it’s easily one of the most practical we have seen of late. Adding to its practicality, the Maestro delivers a healthy seven-day power reserve thanks to its series-mounted pair of barrels.

Unlike other haute horlogerie creations we’ve highlighted for Watch of the Week where color pairings were the name of the game, the Christophe Claret Maestro is best suited to a “less is more” approach. All but the subtlest patterns should be avoided to not detract from the Maestro’s impactful presence—solids and neutrals will provide the best background. Its reasonable proportions allow it to slip under a shirt cuff when in a business setting, which is where the red gold variant is most well suited. In titanium and blue, on the other hand, we’d be more tempted to dress it down a little, but business casual is about as far as we would go.

The Christophe Claret Maestro is just starting to arrive in North American retailers. Pricing has been set at $76,000 in red gold, and $68,000 in titanium. (christopheclaret.com)