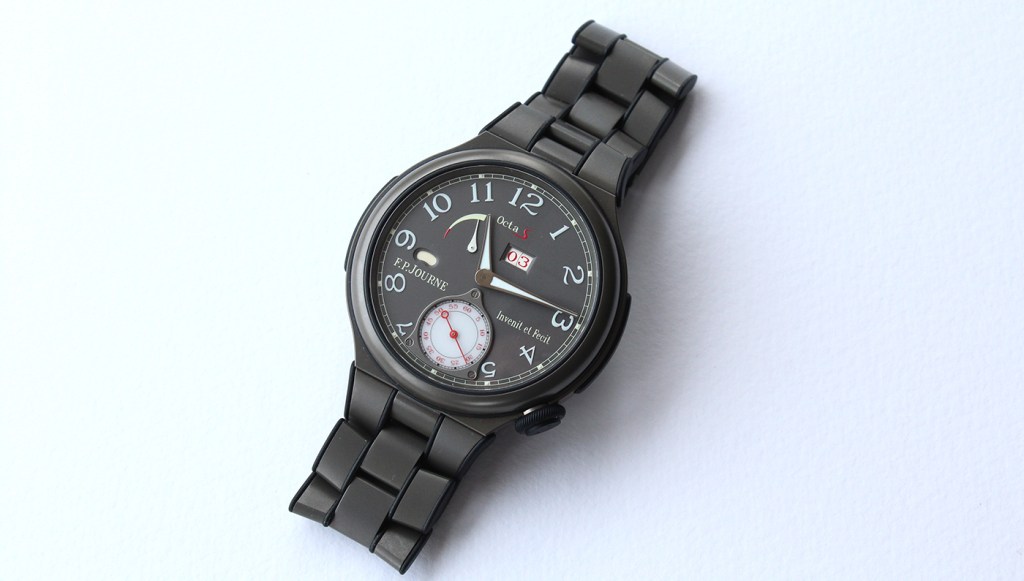 It has been quite a busy beginning of the year in the watch world, and though there is no shortage of new releases to discuss, there is more to our Watch of the Week series than focusing solely on all things latest and greatest. This week, we’re hopping back a few years to this casual gem from the F.P. Journe archives—the Octa Sport ARS Titanium. Viewed by some as the horological equivalent of Bentley’s recent foray into the SUV segment, the idea of a Journe sport watch originally came as a bit of a shock. Unlike the usual chunky diver options out there, Journe’s sports watch was designed with lightness as its absolute focus. In its original guise, the Octa Sport was built primarily out of aluminum—not only in its case and bracelet, but the material was also heavily used for components of the moment itself where possible. This updated variant (launched in late 2014) now uses titanium for its case and bracelet, adding to its overall durability without packing on additional mass. The featherweight piece has since been overshadowed by more recent unveilings including but not limited to the technically astounding Vagabondage III we saw in Geneva last month, but even now it remains a compelling option for those hunting for something casual that doesn’t sacrifice or cut any corners when it comes to quality in execution.

Visually, the Octa Sport ARS Titanium is a little polarizing. The combination of its dark gray (almost green) titanium and the stark white indices and subdial—along with its white and red day/night display and power reserve indicators—keep the piece remarkably legible even in low-light conditions, while the red subdial numerals, second hand, and date display add to its casual, sporty vibe. Arguably one of the most interesting elements to its design, the heavy use of rubber throughout the case and bracelet, was actually included for protection and not aesthetics. Much like the bumpers on your car, Journe wanted to ensure that the Octa Sport could be bumped and banged around without fear of damage. By adding these rubber details to the bracelet, case sides, crown, and even at the crystal’s perimeter, the watch has a particularly robust appearance considering its lack of heft. Given this rather unique detail, the brand also opted for a fully integrated bracelet, meaning you won’t have the option of swapping straps on a whim. With other more generic-looking sports watches, this limitation would be to the piece’s detriment, but on a uniquely executed watch like this, that is hardly the case.

As mentioned previously, this piece is pure, unabashed F.P. Journe, so there is a lot going on under its skin. Both the mainplate and the bridges of Journe’s Caliber FPJ 1300-3 self-winding movement are made from aluminum rather than the brand’s usual 18-karat rose gold. This change, along with the its sapphire-and-aluminum dial, makes the watch come in at a feather-light weight of only 2.5 ounces (2.1 ounces if you choose to order it on a rubber strap). Beating away at 3 Hz, the Octa Sport’s movement boasts a power reserve of five days—an extended length that is far from common at the more casual end of high watchmaking. In the spirit of sticking to the company’s motto of “Invenit et Fecit” (Latin for “he invented it and he made it”)—a phrase found on every timepiece that leaves the atelier—this caliber, as well as the case, dial, and other components, are all crafted in-house. As expected, the movement itself is beautifully finished, and can be seen via a smoked sapphire exhibition caseback.

This was an interesting piece to evaluate; on paper, the Octa Sport comes across like more of a denim-to-the-lounge and shorts-to-the-tennis-court sort of watch, but in practice, it is capable of much more. With its svelte 11.6 mm thickness and oh-so-comfortable fit (thanks in large part to its integrated bracelet), the Octa Sport can safely sneak in under a shirt cuff—especially when monochromatic or grayscale attire is the look of the day. Although it would look significantly out of place paired with a black suit. From a comfort and wearability standpoint, the Octa Sport is definitely your best friend when it comes to any exertive activity, as it is one of the lightest and most comfortable options out there. Of course there are still people that prefer to go sans-watch on the tennis court or golf course, but if the one thing holding you back has been the weight or movement of that heavy gold or steel watch, we would strongly recommend giving this one a go.

The Octa Sport ARS Titanium—priced at $32,000 with a bracelet or $25,900 with a rubber strap—can be purchased through F.P. Journe boutiques around the globe as well as through select authorized dealers. (fpjourne.com)