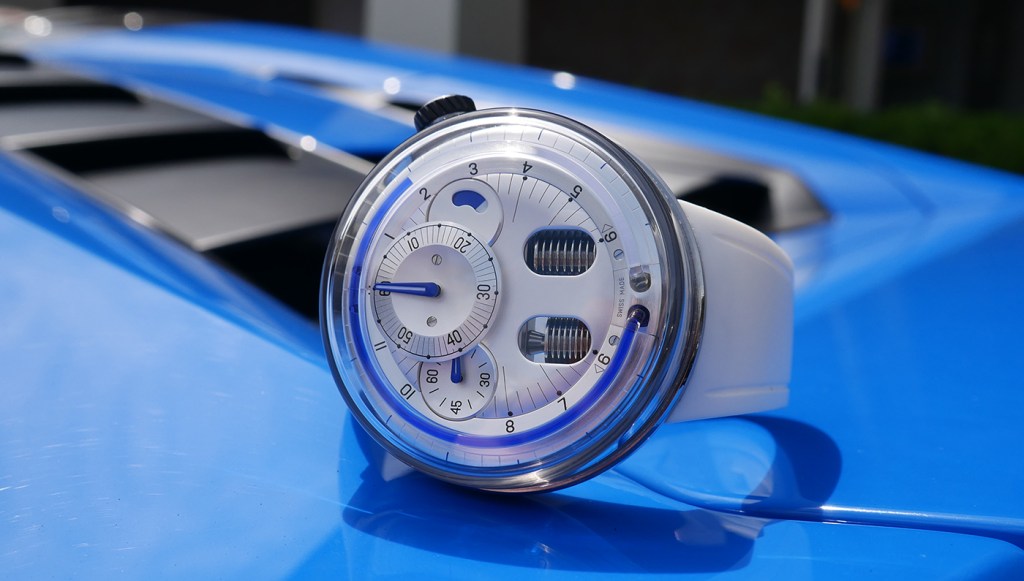 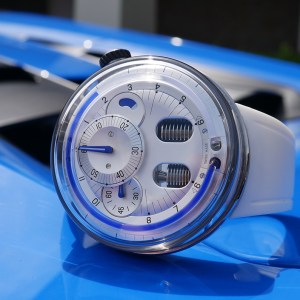 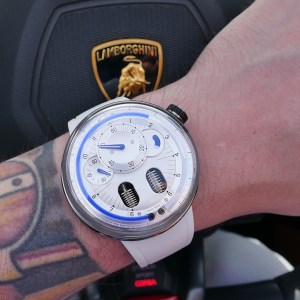 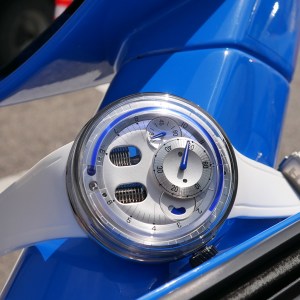 Our choice for Watch of the Week this week was the first piece that we saw and laid hands on in Basel, and between its bold yet minimalist design and more approachable price, the HYT H0 ($39,000) remains one of our favorites of the show. The brand remains the only player in the game when it comes to using fluid to indicate time in such a fashion, and with this latest redesign, HYT is poised to draw in even more fans. Aside from its new design language, the aggressive pricing  that undercuts its siblings by $16,000 came as a bit of a shock. The H0’s case is by no means cheaper or easier to manufacture, and its inner workings are on par with other models from the brand that command a price of $55,000, positioning the H0 as quite the bargain, relatively speaking. Having just finished a brief stint of hands-on time with the new piece, we found ourselves equally smitten with HYT’s new “entry level” offering.

The biggest change from past HYT models is definitely in the dial and case design of the new H0. It uses the same movement architecture as that found in the H1 and H4 models, and the positions of its minutes, seconds, and power reserve subdials are the same as well. From there, the landscape changes drastically. Instead of the usual partly skeletonized industrial design approach, the H0 uses a three-dimensional multi-layered dial with indices reminiscent of the graduations seen on medical equipment or scientific instruments. Of the pieces to arrive in the HYT collections, the H0 speaks directly to the medical research connection that led to the company’s inception.

The design of the H0’s case and crystal are yet another significant departure from past designs. Though it sticks with the same massive 48.8 mm case diameter of its siblings, the new piece has a lugless case design that makes it infinitely more wearable for those with smaller wrists. Last fall I had the pleasure of spending some time with the HYT H1 Colorblock Red, and though I wouldn’t qualify it as too big, it certainly pushed my boundaries. The lack of lugs allows the H0’s strap to curve down and hug a smaller wrist, and in an era where other brands are dropping to smaller and smaller proportions, this was a smart move by HYT to help reach a broader audience. Last and certainly not least, practically half of the case is made up of a massive domed sapphire crystal that not only gives the illusion of more restrained case dimensions, but also provides its wearer with an unobstructed viewing angle of its dial and fluid track.

As we previously noted, nothing has been altered at a technical level with the launch of the HYT H0 compared to other models in the range. A mechanical hand-winding movement running at 28,800 vibrations per hour provides a power reserve of 65 hours. This mechanism is linked to a set of bellows (visible through two cut-outs in the lower portion of its dial) which precisely pumps fluid around the outer track in retrograde from the six o’clock indication. Once the blue fluid reaches six o’clock, it is then drawn back to its starting point in order to continue its travel past the seven o’clock mark and beyond. Though its indications for hours and minutes are separated in such a way, the H0 proved to be quite straightforward and easy-to-read during our stint with it on the wrist.

Much like a few of our other Watch of the Week candidates, the H0 is another piece where going bold is never a bad thing. As we truck along towards Memorial Day, the option of all white attire becomes a consideration, however shades of denim with white accents would be the most logical play in our books. Those of you looking to push boundaries a little further may even want to consider going down the path of a blazer and sneaker pairing, though the sneaker of choice would need to be equally attention-grabbing to be up to the task. In addition, the H0 will also be available in orange and black in case a different color pallet is preferred.

The new HYT H0 is expected to land in select retailers in the United States and abroad later this year. (hytwatches.com)