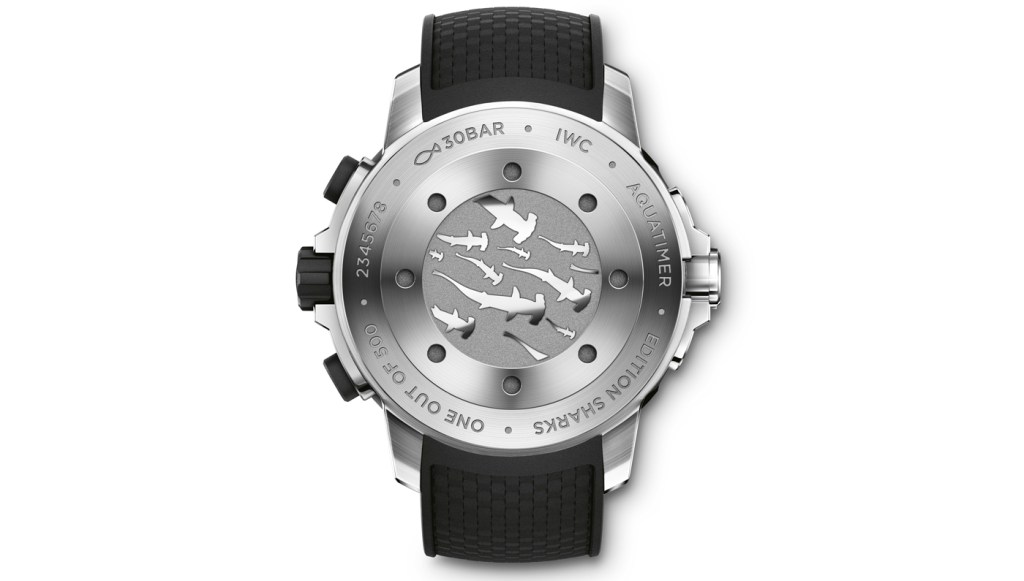 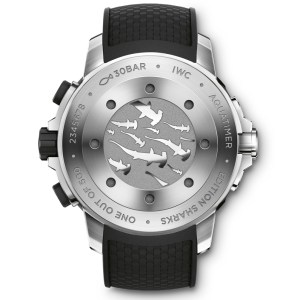 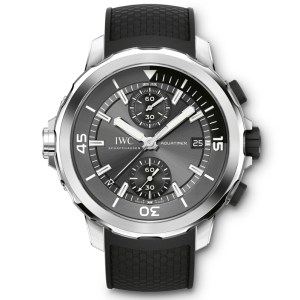 An estimated 100 million sharks are killed every year for their meat, fins, liver, or gill rakers, according to researchers. IWC Schaffhausen is drawing attention to their plight with its new Aquatimer Chronograph Edition “Sharks.” The limited-edition dive watch comes bundled with a copy of TASCHEN’S Sharks by Michael Muller, an extra-large coffee-table book depicting all species of sharks in hundreds of breathtaking photographs. The photographer, best known for his celebrity portraits, has traveled the world to shoot the predators—capturing them with a 1,200-watt underwater strobe lighting rig—without the protection of a cage. The watch-and-book combo is a fitting milestone in IWC’s seven-year-old collaboration with the Charles Darwin Foundation, which has helped focus its charitable efforts on ocean conservation.

How It Looks: The Aquatimer special edition comes in a 44 mm stainless-steel case on a black rubber strap with a stainless-steel pin buckle. Its sleek gray dial, which includes a dusting of luminescent coating to optimize readability, mimics the color of most sharks. The caseback, however, is what sets the timepiece apart from other dive models; it features an engraving depicting a group of hammerhead sharks swimming.

How It Works: “This is a true functional instrument,” IWC creative director Christian Knoop said during an event promoting the Sharks edition at the IWC boutique in Beverly Hills, Calif. He singled out the model’s IWC-manufactured 89365 calibre, a mechanical movement featuring a date display, a stopwatch function, a flyback function, and small hacking seconds. “It’s one of the most proven and reliable movements we have in our range,” Knoop added. Designed to withstand dive depths greater than 1,000 feet, the watch is equipped with a patented system consisting of an inner and outer bezel; the inner bezel can only be adjusted in an anticlockwise direction. The model’s power reserve lasts 68 hours.

How to Get It: Limited to 500 pieces, the Aquatimer Chronograph Edition “Sharks” comes with a collector’s edition of Michael Muller’s Sharks that is signed by the photographer and packaged inside a metal cage designed to evoke the iron cages used by divers swimming with sharks. It retails for $12,200. (iwc.com)