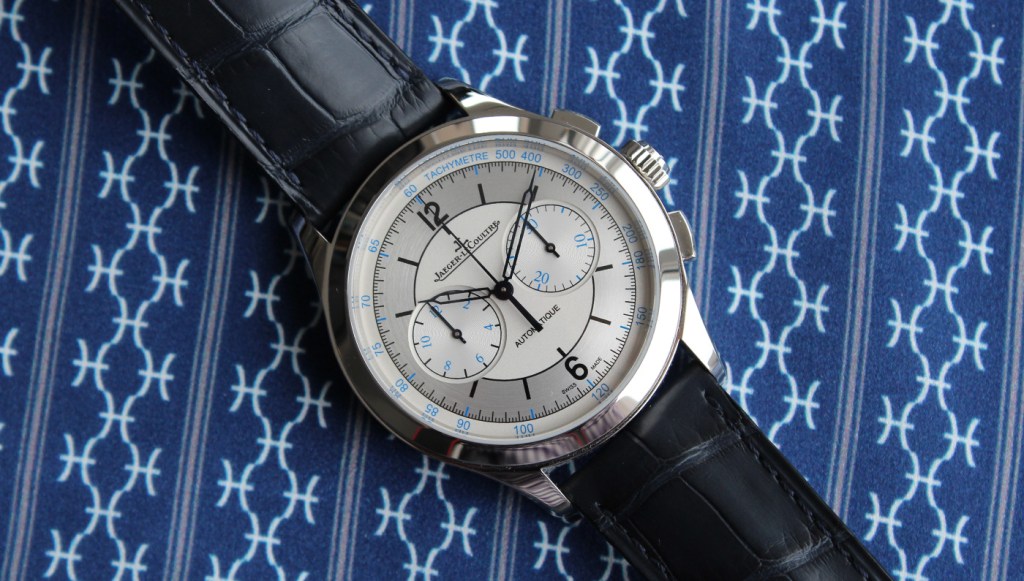 Once the “oohs” and “aahs” over SIHH’s bank-breaking technical marvels had subsided and the search began in earnest for the watch that collectors and enthusiasts will actually want to wear on a regular basis, many eyes quickly turned back toward Jaeger-LeCoultre. The Master Control line was due for a bit of a refresh (the current chronograph dates back to 2010 and has not undergone any significant changes), so in celebration of the 25-year anniversary of the ever-popular line, the brand launched three new models—the Master Control Date, the Master Geographic, and the Master Chronograph—with more vintage charm than past models in the collection. Given their superb case proportions, stunning sector dials, and clever skeletonized hands, the new releases gave us plenty to drool over. So as soon as they landed in New York, we had to go hands-on with our favorite piece of the trio—the Master Chronograph.

Aesthetically speaking, this version of the Master Chronograph is a home run. The new piece retains the same fonts, case proportions, and pusher design as the outgoing model, but is otherwise vastly different from its siblings. Clearly looking to capitalize on the ever-growing popularity of vintage reissues—as well as the hot vintage market as a whole—Jaeger-LeCoultre opted to use sector dials for the series, which came as a bit of a surprise considering this design feature never appeared on its vintage pieces. Historical anachronisms notwithstanding, the two-tone silver dials used throughout the new collection are attention grabbing without being obnoxious, and the addition of light blue accents for the subdial numerals and tachymeter scale help the chronograph feel a touch more casual than past models from the line. Jaeger-LeCoultre chose to forgo a running seconds subdial and date window, which makes the chronograph appear more period correct as well as frees up more space to appreciate its new dial. The choice to use blued skeletonized hands could not have been more adroit and rounds out the look nicely. A very select group of collectors might be disappointed that the watch lacks any sort of luminescent indices, but when the piece is considered in its entirety, this deficiency is not a detail that should hold back many (or any) buyers.

As the new watch is based on the existing Master Chronograph, there isn’t much new from a technical standpoint. The timepiece is powered by the brand’s Caliber 751G automatic movement—a derivative of the 751A/1 found in its predecessor. The in-house caliber has been stripped of its running seconds subdial and date window, but otherwise remains unchanged. It still offers a respectable 65-hour power reserve, and beats away at 28,800 vibrations per hour. Given that the calibers are identical in so many ways (including their 5.72 mm thickness), we aren’t quite sure why the new chronograph’s case measures 0.4 mm thicker than the standard version at 12.1 mm.

It really doesn’t get much easier than this. Navy suits, black suits, beige chinos, denim—the list goes on for days. Its adaptability is one of the chronograph’s biggest draws (other than the fact that it is only $8,000, compared to the standard version at $9,000). Think of this as your Chelsea boot of the watch world—it is about as versatile as they come. It will be right at home at the office, but it isn’t so dressy that it would look out of place while grabbing a Sunday morning coffee or wandering around playing tourist on a sunny afternoon. Collectors hunting for a classic piece that can do double (or triple) duty won’t be disappointed here.

Jaeger LeCoultre boutiques are already taking pre-orders for the new Master Chronograph, and the first examples are expected to arrive in stores in June. (jaeger-lecoultre.com)