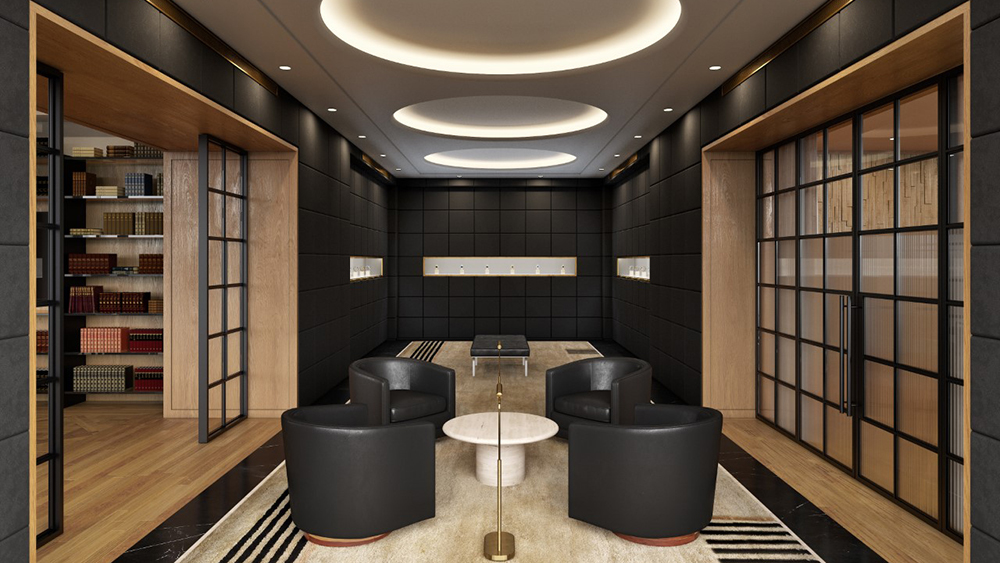 WatchBox is bringing an extravagant new concept to the Big Apple this fall.

On Tuesday, the platform for pre-owned luxury timepieces unveiled new renderings of its posh New York Collector’s Lounge that will open in a few months. The space will span up to 5,000 square-feet on the fourth floor of the landmark Fuller Building at 57th Street and Madison Avenue in Midtown, Manhattan. More than just a retail shop, the immersive lounge will offer watch obsessives access to a hands-on “watch lab” where you can examine and learn more about the watches available, including pieces by Patek Philippe, Rolex, Audemars Piguet and Blancpain.

The lounge will also house an event space with private showrooms and a boardroom, alongside a video and digital-media studio. WatchBox tapped acclaimed design firm Studio Mellone to help conceptualize the space. Andre Mellone, the Brazilian designer who founded the studio, is no stranger to creating upscale lounges, having worked for high-profile designers such as Thom Browne, Carolina Herrera and Jason Wu—not to mention 25 Park Row’s spa-like amenities floor. The designer’s concepts will grace new WatchBox locations in Miami, Los Angeles and Boca Raton, all of which are slated to open later this year. The NYC lounge, meanwhile, will become the company’s US flagship.

A rendering of one of the comfortable lounge areas in the NYC lounge, complete with wooden design accents and furniture.  WatchBox

“Old concepts of retail, residential, and hospitality are all merging into one,” Mellone said. “Stores look like homes; homes look like hotels… it’s all about warmth and excitement and appreciation for design. Spaces should be impactful and exciting, but feel comfortable and have a staying power.” The designer said he was inspired by the unselfconscious, playful sexiness found in the early James Bond films.

The striking bar set-up that will be available to visitors within the space.  WatchBox

In addition to the opening of its new stateside locations, the platform will also open outposts in London and Shanghai within the next six months. “WatchBox’s expansion strategy targets regions with a strong growth forecast for the luxury watch segment,” Justin Reis, Global CEO and co-founder of WatchBox, said. “We’re excited to expand our physical footprint in the United Kingdom and China, two of the top five global watch markets, where we will introduce our curated inventory and client advisory model.” The reseller has grown significantly since its founding in 2017, with retail locations in the Unites States, Hong Kong, Singapore, Switzerland and Dubai.

Of course, WatchBox is not the only brand using retail locations to offer more immersive experiences with watches. Audemars Piguet opened a new experimental retail space in NYC’s Meatpacking District last month, offering a sprawling 5,100 square feet of open interior space with which to explore the brand’s timepieces. Vacheron Constantin, meanwhile, opened its biggest store in the world in NYC last June, using the capacious locale to showcase ultra-rare timepieces to shoppers.

A room within the NYC lounge showcasing a larger variety of watches and seating for examining them with on-hand experts.  WatchBox

Watchbox is aiming to open its domestic locations from New York to California between September and October of this year. Its new international locations in Shanghai and London should be open by December.