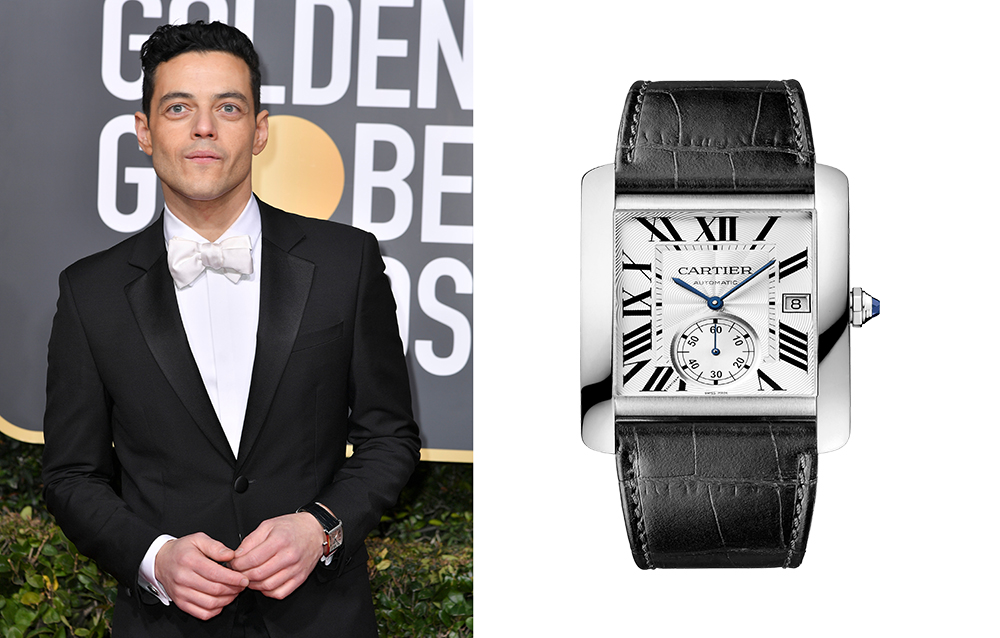 There were a lot of surprise wins at last night’s 76th Annual Golden Globes, including an upset in the biggest category of the night, Best Picture-Drama. The Freddie Mercury biopic starring Rami Malek, Bohemian Rhapsody, edged out Lady Gaga and Bradley Cooper’s rumored favorite, A Star is Born. But before the main event, there were plenty of other A-list winners stealing the show. The sharpest dressed men in Hollywood made sure they had a watch on their wrist to keep time with the occasion. Many opted for simple, clean three-hand steel watches while some dared to try something different like Sterling K. Brown, who opted for a pilot’s watch for the formal event. But it was the perennial man of ceremonies, Ryan Seacrest, that ultimately took home the gold for his rare yellow gold Rolex Ref. 6263.

Below are handful of the award night’s high-end Swiss timepieces that took the spotlight.

The only watch more recognizable than Malek’s was Ryan Seacrest’s vintage Rolex Ref. 6263 Daytona. As the world’s most pervasive host, radio personality, and producer, it’s only fitting the man would have the most prized timepiece at the Golden Globes. His Ref. 6263, similar in appearance to the one above that recently sold at a Phillips auction in December for $225,000, has a yellow gold case and bracelet with contrasting black subdials set in a gold dial. Gold versions of the Ref. 6263 are particularly rare with only 100 per year were made in the precious metal at the time of its production. It stood out against his impeccable aubergine velvet suit (which believe it or not is from his own namesake collection) without looking too flashy. A known Rolex collector, Seacrest made it clear who was taking home the gold pre-show.

The Assassination of Gianni Versace’s Edgar Ramirez (who played Gianni Versace in the FX show) was all smiles as he headed into the show wearing a 42 mm Rotonde de Cartier in steel ($9,300) with Cartier Double C logo cufflinks in sterling silver. The watch features a large date, a retrograde second time zone, and a day night indicator. The perfect timepiece for the jet-setting man. Ramirez had plenty of reason to get all slicked up—the show took home the award for Best Limited Series or Motion Picture Made for Television.

Sterling K. Brown, star of NBC’s This Is Us, picked an unconventional watch for the black tie event. The actor chose a sporty Antoine de Saint Exupéry Chronograph Pilot’s Watch from IWC ($5,250) with a chocolate brown dial and subcounters on a brown Santoni leather strap. The strap was inspired by the flying suit once worn by the famed French pilot and author of The Little Prince, for whom the watch was named.

Darren Criss took home the award for last night’s award for Best Performance by an Actor in a Limited Series or Motion Picture Made for Television for his role and Andrew Cunanan, Gianni Versace’s killer in The Assassination of Gianni Versace: American Crime Story. He took the stage to accept his Golden Globe with an IWC Portofino Automatic ($4,700). The elegant 40 mm, time-only watch with a silver-plated dial and date display on a black alligator strap was the perfect pairing for his risky floral tuxedo jacket.

Nominated for his performance as the lead character in the Netflix series Ozark, Jason Bateman flashed his IWC Portugieser Automatic in stainless steel ($12,700) on the red carpet next to his wife Amanda Anka. The 42.33 mm automatic, self-winding timepiece has 7 days of power reserve marked by an indicator at 3 o’clock, an IWC-manufactured 50210 caliber movement, a date display and small hacking seconds, as well as an 18-carat gold rotor seen through the sapphire crystal caseback. It’s a subtle, classic timepiece but it took center stage on Bateman’s wrist last night.

John Krasinski wasn’t nominated last night even though fans have been hooked on his role as an up-and-coming CIA agent in Tom Clancy’s Jack Ryan. The navy blue dial of his IWC Portugieser Chronograph ($7,600), which matched his sharp Brunello Cucinelli tux was, however, a wardrobe win. The 40.9 mm steel watch on a black alligator strap comes with 40 hours of power reserve and a chronograph function—a functional watch for timing intervals that masquerades as a dress watch. What could be more perfect when you’re daily mission as Jack Ryan is to covertly taking down global terrorists?

Like Darren Criss, Nicolas Hoult chose a simple three-hander with a day date for the evening. In Hoult’s case, however, his tux was just as classic as his watch. The 40 mm Jaeger-LeCoulter Master Ultra Thin Date ($7,500) comes with a silver Sunday-brushed dial for just a hint of sheen and a very slim case at 7.45 mm so it can slip easily beneath the cuffs of Hoult’s tux. Hoult wore the watch to celebrate his role in The Favourite, which was nominated for Best Picture, but ultimately lost to Bohemian Rhapsody.

The night’s biggest winner was Rami Malek of Bohemian Rhapsody, who took home the award for Best Performance by an Actor in a Motion Picture Drama and got to celebrate the film’s win for Best Motion Picture Drama. He wore a large Cartier Tank MC in steel ($6,750) with matching Cartier Double C cufflinks to celebrate the big night. The automatic winding timepiece features the brands large Roman numerals in its iconic rectangular case shape with a caliber 1904-PS MC movement. It’s a classic three-hand style with a date in one of the most instantly recognizable designs worn on the red carpet.