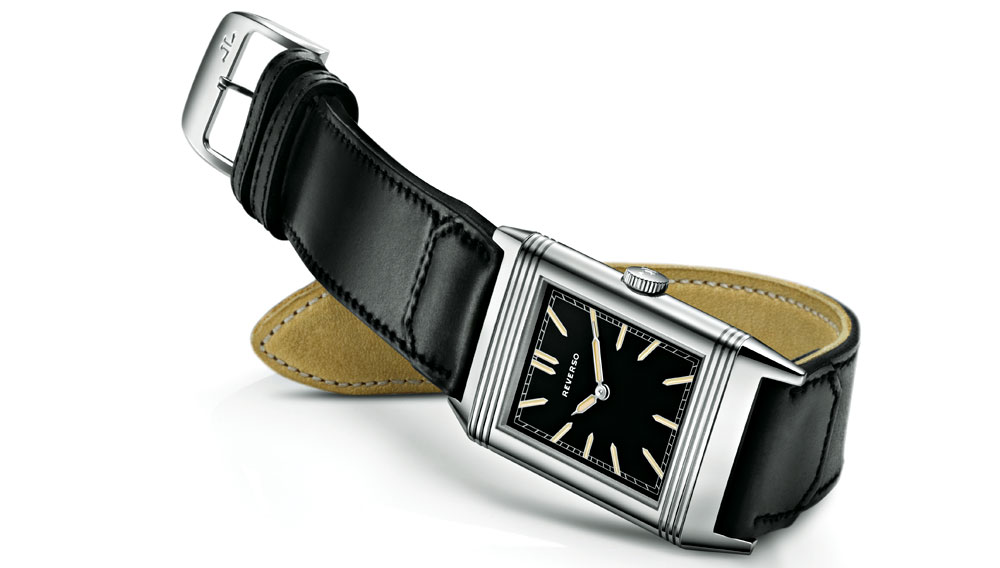 The sport of polo has made several sartorial contributions to Western culture. When Sir Pratap Singh—a son of the Maharaja of Jodhpur and an avid polo player—attended Queen Victoria’s Diamond Jubilee in 1897, he brought with him his entire polo team, whose members wore an adaptation of traditional Indian trousers with flared hips and tapered legs. The pants, later called jodhpurs, caused a sensation and forever altered English equestrian attire. The first button-down collar was also a unique feature of early polo uniforms, though in the 1930s, the piqué cotton jersey designed by Grand Slam tennis champion René Lacoste replaced this long-sleeved garment and became universally known as the polo shirt. Yet the most stylish design statement to emerge from the game’s long history is the timepiece developed in 1931 by Jaeger-LeCoultre especially for its mounted athletes: The Reverso introduced an innovative case that could be flipped around on hinges to protect the dial from damage during a polo match.

To celebrate the 80th anniversary of this classic, the Swiss watch company decided to pay homage to the watch’s sporting origins, and so its design team asked the Fagliano family of Buenos Aires to create special leather straps for a new limited-edition model. Specialists in custom-made polo boots for four generations, the Faglianos craft this unique footwear in their atelier for the world’s leading polo players, including No. 1–ranked Adolfo Cambiaso. Eduardo Fagliano, who works alongside his father and his son, still employs his grandfather’s foot-pedal-operated sewing machine to assemble the firm’s production of fewer than 100 pairs of polo boots per year.

“It wasn’t easy to convince the bootmaker to experiment in a new genre for the first time, especially since Eduardo has a long waiting list for his boots,” says Philippe Bonay, Jaeger-LeCoultre’s North American president. The watch company had to work around Fagliano’s schedule to get the straps made, because the artisan has a six-month backlog of orders for his boots (which start at $2,000 per pair) from such prominent international players as Britain’s Prince Charles and Prince Harry, among others. As an added enticement, Bonay gave Fagliano free rein to follow his own creative instincts in styling the straps for the Grande Reverso Ultra Thin anniversary edition. Using the same durable yet soft cordovan leather from which he makes his boots, Fagliano designed the straps to mirror the geometric lines of the watch’s case. “With age and wear, the leather gets a patina to make it smoother and shiny,” he says, noting that a single strap requires an entire day to complete.

Fortunately for Fagliano, Jaeger-LeCoultre will produce only 100 examples per year of the Grande Reverso Ultra Thin ($7,250), whose simple, superthin steel case houses a manually wound Calibre 822 movement and a 45-hour power reserve. Available with a black dial, the watch also features luminescent dagger-shaped hands that reflect the period of the original model. While Fagliano’s schedule is booked six to 12 months in advance with custom boot orders, he concedes that the project has provided an amusing break from his routine, and plans to carve out time to continue to make the straps. “I don’t have the time,” he says. “But, this is a fun project.”