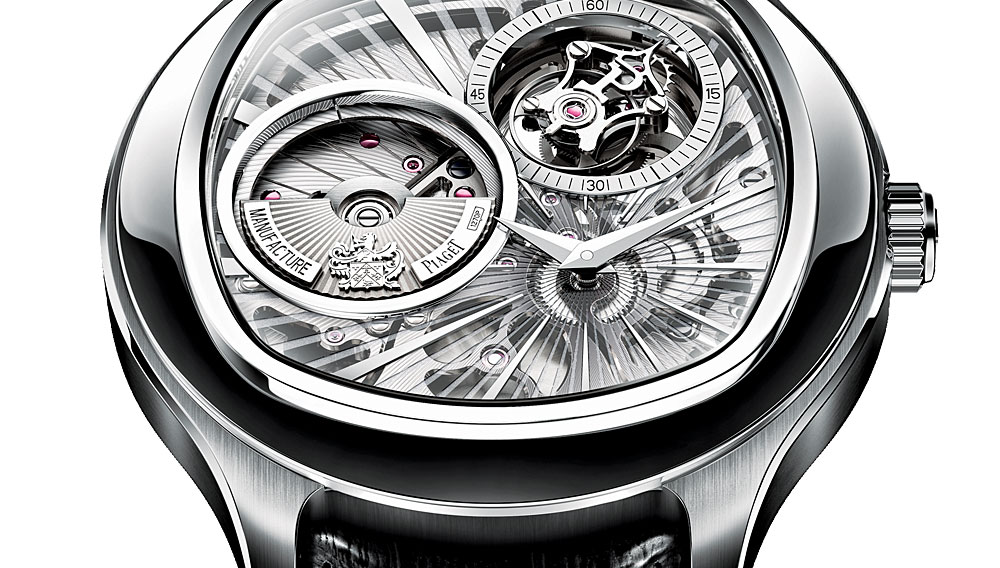 To enhance a timepiece’s beauty, the designers at Piaget not so simply reduce its size. “Our business is to create thin and very elegant men’s watches,” says company CEO Philippe Léopold-Metzger. “The technical part of watchmaking allows the watch to be beautiful. But technique is not, in itself, the purpose.”

If a slender profile is the highest aesthetic goal, then Piaget’s latest watch, the Emperador Coussin Tourbillon Automatic (price available upon request) represents the absolute state of the art. At a little over a centimeter thick, the watch is the thinnest self-winding tourbillon on the market. Yet this model showcases its technical sophistication in ways other Piaget timepieces do not. The tourbillon is built with an open-worked construction—a configuration gaining widespread popularity among collectors—that displays the movement through a transparent sapphire dial. Moreover, Piaget’s design team decided to move the winding rotor to the dial alongside the tourbillon carriage. This arrangement further complicated the engineering challenges already posed by the company’s requirement that the Emperador Coussin set a world record for slimness.

Fortunately, the designers were able to draw on the substantial trove of ultrathin assemblies that Piaget has developed in recent years. The movement is a complex amalgamation of these examples—and a fascinating illustration of the ways in which computer design technology has enabled watch manufacturers to redeploy existing parts in new offerings. Many of the internal components—including the automatic winding system, going train, and setting system—were lifted from the ultrathin 1208P, the world’s thinnest automatic movement, which the company released last year, while the tourbillon cage is borrowed from the 600P movement, first introduced in 2003, which still holds the thinness record for manual-wind tourbillons.

The technical staff in Switzerland’s Canton of Jura put the finishing touches on this new movement in collaboration with Piaget’s design studio in Geneva, which added modernist touches, such as matching sunray patterns on the upper plate, sapphire dial, and rotor. These details, like the slim dimensions of the case, are certainly striking; yet the eye of the experienced collector is inevitably drawn to the movement’s intriguing layout. “Hopefully,” says Léopold-Metzger, “[Piaget] will benefit from the return of elegance to our watchmaking world.” Even so, he is clearly hedging his bets by placing the company’s technical acumen conspicuously on display.