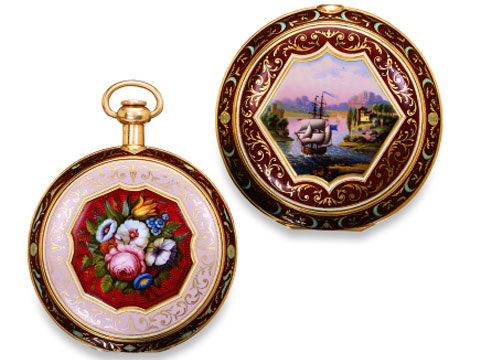 René Beyer, the 40-year-old CEO and president of Chronometrie Beyer, cannot pinpoint the year, but it was sometime during the fall of 2000 or 2001 when his late father, Theodor, asked to meet him in the vault of a Swiss bank. As members of a Zurich watch retail dynasty that dates to 1760, the two were quite familiar with bank vault interiors. This visit was different, however. While the son watched, the father produced a wealth of rare, unusual, and historic timepieces: a large silver freesprung Urban Jürgensen deck chronometer from 1810 with its original mahogany box, a LeRoy cabriolet quarter-repeating gold-and-enamel pocket watch made for the Islamic market circa 1820, a set of four central European pendant watches dating to the early 17th century, and hundreds more.

René had long suspected that his father kept a private collection, and here, at last, was the proof. As someone whose first words were “tick-tock,” he was thrilled to see these treasures that his father had amassed over the course of five decades. “I was very proud,” says René. “It was like entering the cave of Ali Baba, or discovering the pyramid of an Egyptian pharaoh.”

This collection—known by few, viewed by fewer, and full of items absent from the market for decades—will be auctioned by Antiquorum on November 16 at the Hotel Baur au Lac in Zurich. The auction, which will consist of more than 170 lots, will be preceded by previews at the Tourneau Time Machine shop in New York (October 24 and 25), Antiquorum’s showrooms in Tokyo (October 31 and November 1) and Geneva (November 4 through 7), and at the Beyer family shop in Zurich from November 13 through 16.

An expansion of the shop’s Bähnhofstrasse quarters in 1970 gave Theodor the space to open the Museum of Time Measurement in the basement. Now called the Museum of Watches and Clocks, it contains more than 500 exhibits on the history of timepieces from 1400 B.C. forward. Theodor acquired most of the items on display. After launching the museum, Theodor continued to maintain a private collection, and when he died in July 2002 at the age of 76, it ranged from his personal Patek Philippe watch, sixth of a series of 25 that the house made for Chronometrie Beyer, to European automatons, pocket watches decorated with tiny figures that moved at the touch of a button, to a gold, mid-19th-century Frederic Courvoisier pocket chronometer. “Before he died,” René says, “my father told me that today, it would take 10 times the money and three or four lifetimes to build the same collection.”

There was a definite purpose behind the bank vault viewing that the elder Beyer staged. Having successfully handed the business reins to the seventh Beyer generation, Theodor now sought to ensure that his other great legacy would survive him. In his will, Theodor left instructions to sell the private collection to endow, and thus safeguard, the public one, and he called his son to the vault that day to ensure that his wishes would be respected. The Beyer family has pledged to keep Theodor’s museum intact for future generations to enjoy.