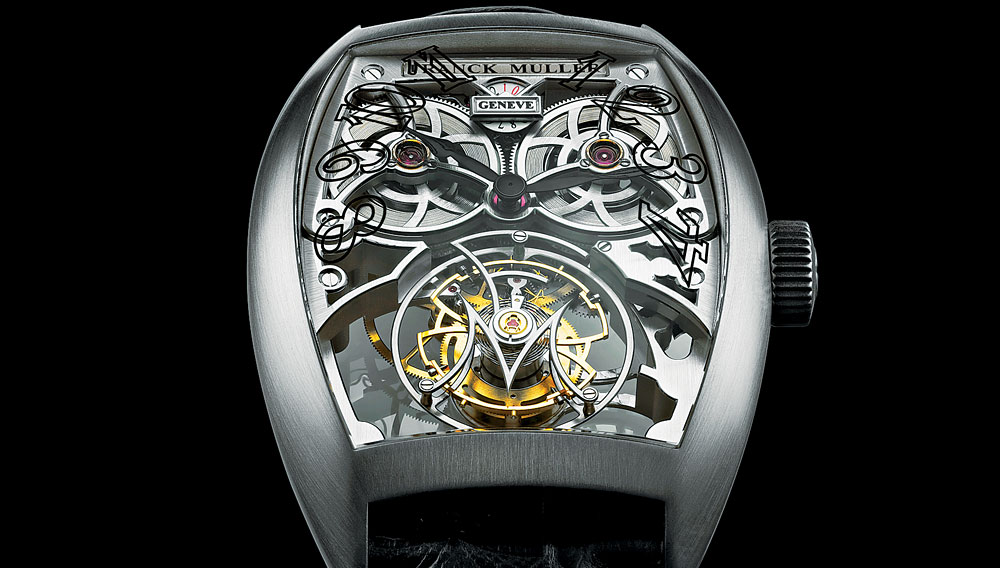 When it comes to complications, Franck Muller’s movement developer, Jean-Pierre Golay, contends that simple can also be innovative. “We wanted to change directions completely,” he says, referring to the watch house’s newest creation, the rather impressively named Giga Tourbillon. “We wanted to create something very simple in the same dimensions as our recent complicated watches. The result is the largest tourbillion [movement] yet built in a wristwatch.”

Interestingly, this decision to craft an ultra-large tourbillon wristwatch is less remarkable than the fact that Golay found on the company’s premises all of the resources necessary to define and pursue his objective—an advantage he did not enjoy just a few years ago.

Despite Franck Muller’s reputation for complicated watchmaking, the company’s capacity to produce such pieces without third-party support is a relatively recent development. Established in the early 1990s, Franck Muller was the first new company to successfully carve its own niche in an industry once dominated by a cadre of established Swiss watch brands—some dating back centuries. Yet by the early 2000s, a public split between management and the company’s eponymous founder—a rift that has since been resolved—and a reliance on outside sources for its movements dimmed the brand’s image in the eyes of many complicated-watch collectors, many of whom had begun to explore a new generation of independent watchmakers.

While management grappled with these challenges, a new team was brought on board to develop more advanced and independent design capabilities. In 2002, Franck Muller hired Pierre-Michel Golay, a movement designer of impeccable pedigree who in the 1970s was a pioneer in adapting high complications to the wristwatch format for Gérald Genta. In 2003, Pierre-Michel recruited the services of his younger cousin, Jean-Pierre, who had left the family profession of watchmaking in the late 1980s to pursue a degree and career in engineering and micromechanics. This professional detour notwithstanding, the younger Golay proved to be a collaborator with cutting-edge skills, and together the cousins completed several versions of a multiple-century perpetual calendar, dubbed Aeternitas, as well as a series of extreme grand complications appropriately named Aeternitas Mega.

All of the expertise and technical capabilities cultivated by the pair during this partnership were brought to bear in creating Franck Muller’s Giga Tourbillon. Working with a team of four, the younger Golay overcame the engineering hurdles inherent in the concept of an oversize tourbillon. To mitigate the excessive weight of the 22-mm cage, the team relied on titanium construction; and to provide the necessary power to operate the movement, they designed a four-barrel power system, as well as special hairsprings that—thanks to significant investments in manufacturing facilities—will be executed in several configurations. “The movement is one of the most beautiful we have ever made,” says Golay, who makes no secret of his pride in the brand’s accomplishments. “We’ll eventually make about 20 versions.”