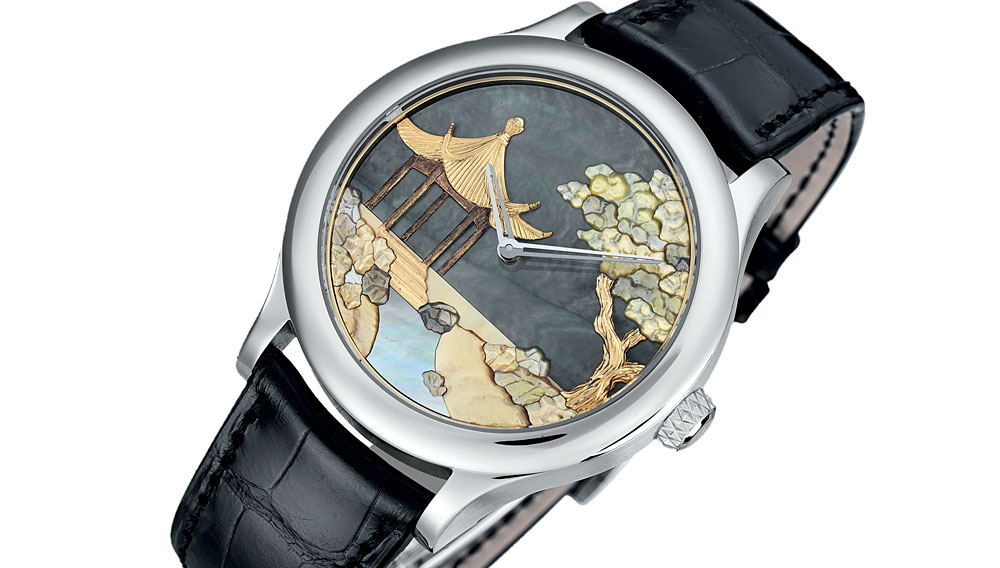 When making watches, Van Cleef & Arpels plays to its strengths. Instead of trying to showcase its technical expertise—as other jewelry houses have done, often with difficulty and sometimes with dubious results—the French jeweler bases its watch designs on aesthetics, the company’s primary focus throughout its 103-year history. Van Cleef & Arpels’ latest collection for men, Midnight Extraordinary Garden, is a limited edition of 32 automatic watches and 32 tourbillons that demonstrate the wisdom of this decision.

These timepieces cede nothing to the more traditional horological fare produced by Swiss watchmakers, but the star craftspeople behind the new collection are not the ones who designed or adjusted the movements; rather, they are the engravers, jewel setters, and enamelers who decorated the dials. “Normally in watchmaking, everything starts with the movement,” says Louis de Meckenheim, Van Cleef & Arpels’ watch-development manager. “We do the exact opposite and start with design.”

As with many of Van Cleef & Arpels’ watches and jewelry pieces, the Midnight Extraordinary Garden collection displays a nature-based motif. The dials depict an Italian, English, French, or Asian garden. The company has made eight automatics and eight tourbillons for each of the four designs.

The concept for the collection originated with one of Van Cleef & Arpels’ in-house designers, but contracted artisans determined the designs’ executions. These craftspeople included enameler Dominique Baron, who works for the dial-making firm Stern Créations—owned by Van Cleef and Arpels’ parent company, the Richemont Group—and independent master engraver Olivier Vaucher. Van Cleef & Arpels gave Baron, Vaucher, and their collaborators a free hand, encouraging them to combine their talents and experiment with novel techniques. “The French Garden Tourbillon mixes diamond cuts to create the effect of water on a multilevel dial,” says de Meckenheim. “Others use three-dimensional enameling or gold engraving with hand-painting on top of it, to give it the appearance of added depth.”

The Midnight Extraordinary Asian Garden automatic, perhaps the most interesting watch in the collection, blends gold engraving with marquetry that employs different types of mother-of-pearl to depict stones, water, and leaves on a tree. The company entrusted the entire dial to Vaucher, who assumed the type of authorship that other companies give only to the most vaunted watchmakers. “We knew he would fall in love with the idea,” says de Meckenheim. “An artist really needs that feeling to do his best work.”