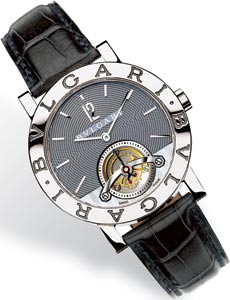 It has become a popular practice for watch brands to introduce complicated movements as a means of elevating their status—regardless of whether they have any real experience in this genre of watchmaking. Consequently, tourbillons are common fare in the Swiss arena these days, with many brands merely procuring the movements from outside suppliers, an act any serious collector would take note of immediately.

It is tempting, therefore, to write off the new Bulgari-Bulgari Tourbillon ($73,800 in yellow gold and $76,200 in white gold) as an attempt by a fashion watch brand to cloak itself in the mantle of authentic complicated watchmaking. But Bulgari is careful to point out that its timepiece beats with a purist heart, thanks to the company’s 2000 acquisition of two watch brands renowned for their complications: Gerald Genta and Daniel Roth. Although industry consolidation is met with cynicism in some quarters of the collecting community, Bulgari has taken steps to ensure that its new watch is not only sufficiently well made, but exclusive and genuine enough to satisfy any doubters.

For starters, the technical team at the Gerald Genta/Daniel Roth workshops in Le Sentier has designed and constructed the movement specifically for the watch, with everything expected in a high-quality tourbillon, including a light cage assembly (0.2 gram) and a balance wheel adjusted by poising screws. It is also reassuring that the movement is built with the experience acquired through the development of previous Gerald Genta and Daniel Roth tourbillons, such as the impressive eight-day power reserve caliber released two years ago.

Bulgari can call this expertise its own because it completely revamped and modernized the Gerald Genta/ Daniel Roth operation so that it bears the parent company’s stamp. First, Bulgari overhauled and updated the combined manufacturing process of the two brands and then reduced the reliance on purchased movements, which some collectors viewed as a negative. Also, the new owners reengineered the original Genta/Roth movements to take advantage of the computer-aided design and metalworking tools that are standard equipment in modern watch factories. “The legacy of the old companies was a drawer of old parts,” says Gerald Roden, managing director of the two brands and the person in charge of their transformation. “Each watch was the work of an individual watchmaker, which sounds nice but is actually a production and service nightmare.”

The new equipment and processes allow the small Gerald Genta/Daniel Roth workshops to function like a manufacture. Although Bulgari still has outside sources perform some specialty tasks and construct some parts, the critical design and construction is completed in-house. Only the most hairsplitting collectors could question the legitimacy of the operation’s manufacture status.

Bulgari at least will not endure any quibbling about the originality of its designs. The new tourbillon is housed in the brand’s signature Bulgari-Bulgari case and features a special black textured dial with côtes de Genève striping around the cage aperture. The striping is a discreet nod to the badges of traditional complicated watchmaking, though traditional this watch is not. The design, which originated in the Rome headquarters, may raise more eyebrows than any aspect of the movement, and additional complicated Bulgaris are in the offing. “We will be maintaining our designs and our contemporary image,” notes Francesco Trapani, Bulgari’s CEO, “but within those boundaries we will be bringing out complicated watches of differing complexities over the next few years.”